Anna-Marie McLemore, author of WHEN THE MOON WAS OURS, on letting a book become what it wants to be

We're delighted to have Anna-Marie McLemore here to tell us more about her latest novel WHEN THE MOON WAS OURS. 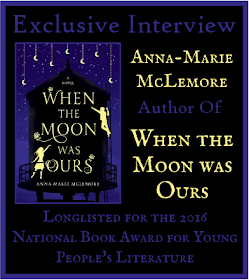 Anna-Marie, what did this book teach you about writing or about yourself?

It taught me how long and how deeply I had believed there wasn’t space for characters like me on bookshelves. It took me several rewrites to let this book become what it wanted to be, the story of a transgender boy of color and a queer girl of color.

What do you hope readers will take away from WHEN THE MOON WAS OURS?

That everyone—the shy boy at school, the odd girl in the bright-painted house, the family whose history no one knows—has their own story. That queerness and transgender identity are as varied as the people they belong to. And that queer characters, transgender characters, and characters of color deserve fairy tales of their own.

Right now I’m working on my fall 2017 book, WILD BEAUTY, the story of the Nomeolvides women who tend the beautiful but dangerous gardens that both protect them and curse them.

When the Moon was Ours
by Anna-Marie McLemore
Hardcover
A Thomas Dunne Book for St. Martin's Griffin
Released 10/4/2016

When the Moon Was Ours follows two characters through a story that has multicultural elements and magical realism, but also has central LGBT themes—a transgender boy, the best friend he’s falling in love with, and both of them deciding how they want to define themselves.

To everyone who knows them, best friends Miel and Sam are as strange as they are inseparable. Roses grow out of Miel’s wrist, and rumors say that she spilled out of a water tower when she was five. Sam is known for the moons he paints and hangs in the trees, and for how little anyone knows about his life before he and his mother moved to town.

But as odd as everyone considers Miel and Sam, even they stay away from the Bonner girls, four beautiful sisters rumored to be witches. Now they want the roses that grow from Miel’s skin, convinced that their scent can make anyone fall in love. And they’re willing to use every secret Miel has fought to protect to make sure she gives them up.

Anna-Marie McLemore was born in the foothills of the San Gabriel Mountains, raised in the same town as the world's largest wisteria vine, and taught by her family to hear la llorona in the Santa Ana winds. Her debut novel THE WEIGHT OF FEATHERS was a Junior Library Guild Selection, a YALSA Best Fiction for Young Adults book, and a finalist for the William C. Morris Debut Award. Her second novel, WHEN THE MOON WAS OURS, will be released on October 4, 2016, and WILD BEAUTY is forthcoming in 2017.

Have you had a chance to read WHEN THE MOON WAS OURS yet? If you don't see characters like yourself on the bookshelves, do you write them? Do you struggle with letting a book become what it wants to be? Share your thoughts about the interview in the comments!