Abigail Johnson, author of IF I FIX YOU, on writing through the problem

We're thrilled to have Abigail Johnson join us to share more about her debut novel IF I FIX YOU. 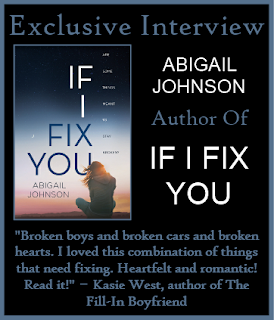 Abigail, what book or books would most resonate with readers who love your book--or visa versa?

I love the comparison authors that my publisher included in the book description: Sarah Dessen, Cammie McGovern and Morgan Matson. I was also thrilled when both Kasie West and Huntley Fitzpatrick blurbed IF I FIX YOU, because I love them both so much and hope readers who enjoy their books will find something to like in mine too.

How long did you work on IF I FIX YOU?

A loooonnngggg time. I think I started writing it five years ago. I had no idea what it would become, and I took lots and lots of time off between working on it. I also had no idea how to write a book when I started, so I made every mistake possible. Twice. When I got serious about writing and committed to completing IF I FIX YOU, it probably took me about a year to finish a readable draft. The book I wrote after IF I FIX YOU took around eight months, and the one after that took less than five, so I'm starting to get the hang of it finally.

My road to publication was long and then crazy fast. I spent years working on IF I FIX YOU and learning--mostly--how not to write a book. Things got exponentially better when I found my critique partners (Sarah Guillory and Kate Goodwin). I finished a draft that they encouraged me to enter into Pitch Wars where I worked with two talented mentors, and because of that contest, I started getting agent requests. It still took me a year and two R&Rs before I signed with my amazing agent, Kim Lionetti of BookEnds Literary, but things moved very quickly after that. I signed with Kim, sold IF I FIX YOU to Harlequin Teen, and published my debut all within the span of about twelve months! IF I FIX YOU is my first book. I have written two more since then and I'm working on a third book right now. Hopefully, they will see publication in the not too distant future.

I'm working on another contemporary YA. I can't say anymore than that, but stay tuned! 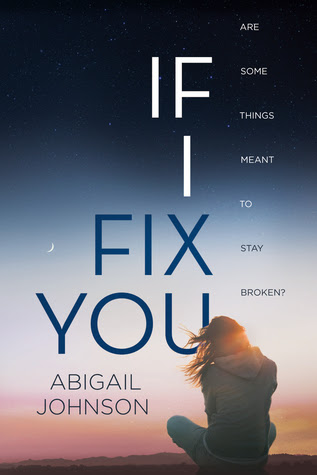 When sixteen-year-old Jill Whitaker’s mom walks out—with a sticky note as a goodbye—only Jill knows the real reason she’s gone. But how can she tell her father? Jill can hardly believe the truth herself.

Suddenly, the girl who likes to fix things—cars, relationships, romances, people—is all broken up. Used to be, her best friend, tall, blond and hot flirt Sean Addison, could make her smile in seconds. But not anymore. They don’t even talk.

With nothing making sense, Jill tries to pick up the pieces of her life. But when a new guy moves in next door, intense, seriously cute, but with scars—on the inside and out—that he thinks don’t show, Jill finds herself trying to make things better for Daniel. But over one long, hot Arizona summer, she realizes she can’t fix anyone’s life until she fixes her own. And she knows just where to start . . .

Abigail was born in Pennsylvania. When she was twelve, her family traded in snow storms for year round summers, and moved to Arizona. Abigail chronicled the entire cross-country road trip (in a purple spiral bound notebook that she still has) and has been writing ever since. She became a tetraplegic after breaking her neck in a car accident when she was seventeen, but hasn’t let that stop her from bodysurfing in Mexico, writing and directing a high school production of Cinderella, and publishing her first novel.

Have you had a chance to read IF I FIX YOU yet? Do you have to write even if you don't feel like it? Have your critique partners helped you take your book to the next level? Share your thoughts about the interview in the comments!