Mindy McGinnis, author of THE FEMALE OF THE SPECIES, on gaining experience to properly execute a story

We're thrilled to have Mindy McGinnis stop by to tell us more about her latest novel THE FEMALE OF THE SPECIES. 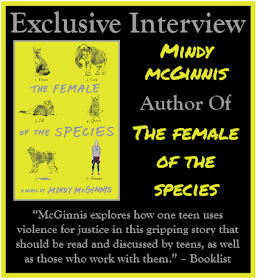 Mindy, what was your inspiration for writing THE FEMALE OF THE SPECIES?

SPECIES is actually the first novel I wrote, over 15 years ago. I was a freshman in college and cable was a new experience for me. I was watching some sort of true crime show about a murder that had occurred in a small town. It was a situation where it was fairly obvious who the killer was, but there wasn't enough proof for the courts. The documentary named the small town, and I thought, "Man, if someone watched this and was convinced of that guy's guilt, they could just go kill him." And then I thought.... huh. Interesting story.

I had always known I wanted to write a novel, but I hadn't done it yet. The idea of vigilante justice stuck with me, and with all the freshman warning talks about parties and date rape and self-defense classes, the story came together for me. As I said, it was my very first novel, and I didn't execute it well at all. It was honestly, quite terrible. I worked on that book for years. Revised. Scrapped. Revisited. Scrapped. After hundreds of rejections I decided it was unpublishable and moved on.

When I was throwing possible ideas for future projects at my agent Adriann Ranta, I happened to mention the concept behind SPECIES. It was originally an adult novel, but I knew it could very easily be adapted to YA. Adriann was excited about it, so I re-read my original novel. It was terrible. Actually unreadable, to be honest.

I started from scratch, using only the concept and character's first names. It's a complex story with a killer for main character so I needed to be able to build empathy for someone who is morally questionable... not easy to do. I don't think I was a good enough writer to execute that the first time I tried. Fifteen years later, I had more experience.

Is there a scene you particularly love?

My favorite scene happens at a party where Alex's violent tendencies come out for everyone to see. She saves a girl from being gang raped, but all anyone can talk about is the fact that... well I won't say what Alex does to the guy in question but, it's memorable.

Very. Hard. As I said, SPECIES was my first completed novel, but my debut NOT A DROP TO DRINK was my fifth finished novel. I had four failed manuscripts, ten years, and hundreds of rejections under my belt before I acquired an agent.

Lots of things, actually! I have a fantasy, GIVEN TO THE SEA being released in April of 2017 from Putnam, and PHANTOM HEART is my Fall 2017 release from Katherine Tegen. Beyond that I have the sequel to GIVEN TO THE SEA (drafting that one right now) and another contemporary that will be releasing in Fall of 2018 from Katherine Tegen. So... yeah. Busy! 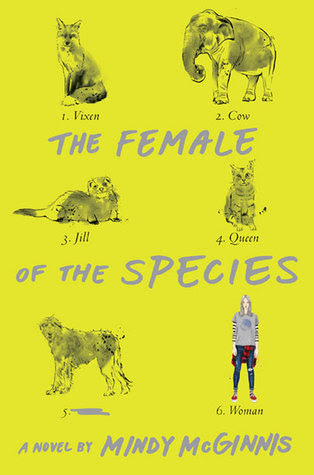 Alex Craft knows how to kill someone. And she doesn’t feel bad about it. When her older sister, Anna, was murdered three years ago and the killer walked free, Alex uncaged the language she knows best. The language of violence.

While her crime goes unpunished, Alex knows she can’t be trusted among other people, even in her small hometown. She relegates herself to the shadows, a girl who goes unseen in plain sight, unremarkable in the high school hallways.

But Jack Fisher sees her. He’s the guy all other guys want to be: the star athlete gunning for valedictorian with the prom queen on his arm. Guilt over the role he played the night Anna’s body was discovered hasn’t let him forget Alex over the years, and now her green eyes amid a constellation of freckles have his attention. He doesn’t want to only see Alex Craft; he wants to know her.

So does Peekay, the preacher’s kid, a girl whose identity is entangled with her dad’s job, though that does not stop her from knowing the taste of beer or missing the touch of her ex-boyfriend. When Peekay and Alex start working together at the animal shelter, a friendship forms and Alex’s protective nature extends to more than just the dogs and cats they care for.

Circumstances bring Alex, Jack, and Peekay together as their senior year unfolds. While partying one night, Alex’s darker nature breaks out, setting the teens on a collision course that will change their lives forever.

Mindy McGinnis is a YA author who has worked in a high school library for thirteen years. Her debut, NOT A DROP TO DRINK, a post-apocalyptic survival story set in a world with very little freshwater, has been optioned for film my Stephanie Meyer's Fickle Fish Films. The companion novel, IN A HANDFUL OF DUST was released in 2014. Look for her Gothic historical thriller, A MADNESS SO DISCREET in October of 2015 from Katherine Tegen Books. Mindy is represented by Adriann Ranta of Wolf Literary.

Have you had a chance to read THE FEMALE OF THE SPECIES yet? Has a documentary inspired a story idea for you? Have you rewritten a novel you wrote years ago? Share your thoughts about the interview in the comments!