I was chatting with readers at the recent book festival I attended about the frustration of mxing paperbacks and hardcovers. I'm strictly a matchy-matchy girl when it comes to books. If I buy hardcovers of a series, I want all hardcovers. If I buy paperbacks, I want all paperbacks. And it seems I'm not alone. We readers are a picky bunch. We love the vanilla and paper scent of books, the way they look on the shelf, the feel of the paper between our fingers.

Today marks the official release of the PERSUASION paperback, which seems terribly strange to me somehow. Paperbacks are odd ducks. It may technically be the same old book, but this whole process of being published still feels so miraculous to me that I can't help celebrating every milestone. Honestly, when I got news that I had a three-book deal, I never thought of it in terms of books on the shelf, but it's a shelf all on its own with all the different versions. And each one is a new reason to be grateful. Each one is a mark of progress, not only for the series, but also for my own growth as a writer. I feel like I learn a lot between every release.

Anyway, here's the paperback in all its glory: 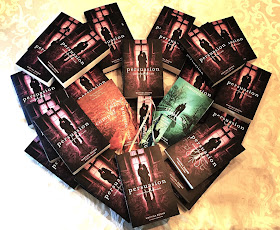 And here's a glimpse of the ILLUSION teaser from inside: 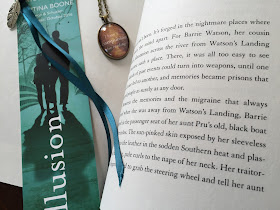 And since I haven't done this in a while, I'm going to do a handful of giveaways with some of my favorite bloggers to celebrate.

Because the series is gothic and southern and magical, anyone who loves it is likely to enjoy BEAUTIFUL CREATURES, HOURGLASS, and BETWEEN THE DEVIL AND THE DEEP BLUE SEA. And I'm throwing in SIX OF CROWS, because like the characters on Watson Island, Leigh Bardugo's characters all share a certain brokenness, but in finding each other they create a family. 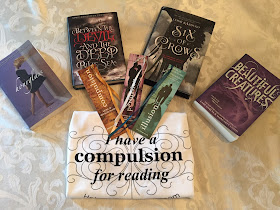 Because COMPULSION and the other books in my series have been called BEAUTIFUL CREATURES meets THE RAVEN BOYS, and because I love the series so much, I'm giving away a full set of Maggie Stiefvater's Raven Cycle books. 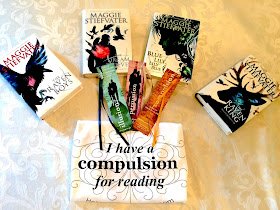 AT CURLING UP WITH A GOOD BOOK

Because there are trapped souls and beautiful people, I'll be giving away THE JEWEL and its sequel, THE WHITE ROSE, together with REBEL BELLE which shares a love of killer heels with COMPULSION. And BLOOD MAGIC features heavily all all three books of the Heirs of Watson Island series. 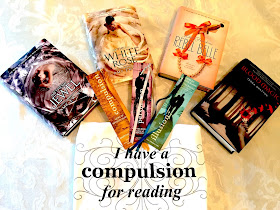 AT YA BOOKS CENTRAL

Because the HEIRS of Watson Island are ONE to a family, and the families are ELITE, and because ILLUSION is all about THE SELECTION, I'll be giving away signed copies of Kiera Cass' series over at YA Books Central. Check back soon for more details! 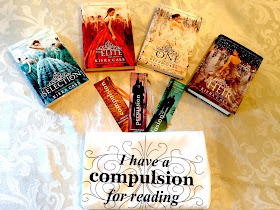 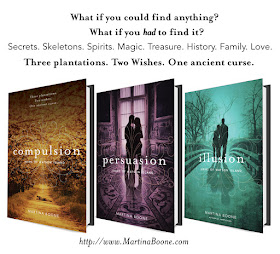