Four Reasons Why Your New Manuscript Is Like A Puppy 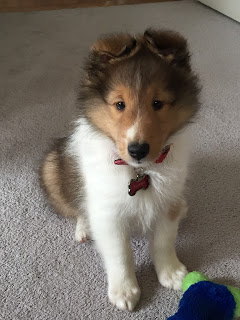 I have both a new puppy and a new manuscript--well, the manuscript is now about nine months old, but for a fantasy, it's still pretty new and I've worked on both Illusion (which is coming out in October, yay!) and my project with Erin Cashman in the meantime. Fantasies are special sorts of creatures, they need time to mature and, like puppies, until they do, they tend to be mischievous little devils.

1) You become obsessed by it until it consumes your waking thoughts and wakes you up in the middle of the night.

2) No matter how much you think you have it under control, it wriggles away the moment you're not looking.

3) You think you're going to train it to behave, but it's just as likely to end up training you.

4) You are determined to end up with something well-mannered and fabulous in the end, but at least in the first few drafts, you know you're going to have to clean up a lot of $hit.


I'm completely in love with both this manuscript and this puppy. So here is a little visual inspiration. That's Phineus (above) at eight weeks. We just brought him home on Thursday.

And below are some visual inspirations for One Among Us, which is deep in revision mode! And no, revision doesn't get any easier after three books. Le sigh. Every book is its own little monster that needs to be conquered. : )

Time for a New Giveaway

The paperback release for Persuasion is less than a month away, so I'm giving away a signed paperback set of Compulsion and Persuasion along with swag some additional swag. 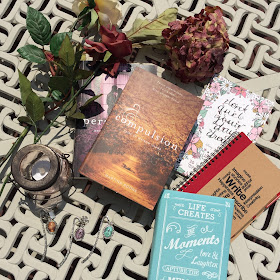 All her life, Barrie Watson has been a virtual prisoner in the house where she lives with her shut-in mother. When her mother dies, Barrie promises to put some mileage on her stiletto heels. But she finds a new kind of prison at her aunt’s South Carolina plantation instead—a prison guarded by an ancient spirit who long ago cursed one of the three founding families of Watson Island and gave the others magical gifts that became compulsions.

Stuck with the ghosts of a generations-old feud and hunted by forces she cannot see, Barrie must find a way to break free of the family legacy. With the help of sun-kissed Eight Beaufort, who knows what Barrie wants before she knows herself, the last Watson heir starts to unravel her family's twisted secrets. What she finds is dangerous: a love she never expected, a river that turns to fire at midnight, a gorgeous cousin who isn't what she seems, and very real enemies who want both Eight and Barrie dead.

Grieving the death of her godfather and haunted by her cousin Cassie’s betrayal, Barrie returns from a trip to San Francisco to find the Watson plantation under siege. Ghost hunters hope to glimpse the ancient spirit who sets the river on fire each night, and reporters chase rumors of a stolen shipment of Civil War gold that may be hidden at Colesworth Place. The chaos turns dangerous as Cassie hires a team of archeologists to excavate beneath the mansion ruins, because more is buried there than treasure.

A stranger filled with magic arrives at Watson’s Landing claiming that the key to the Watson and Beaufort gifts—and the Colesworth curse—also lies beneath the mansion. With a mix of threats and promises, the man convinces Barrie and Cassie to cast a spell there at midnight. But what he conjures may have deadly consequences. While Barrie struggles to make sense of the escalating peril and her growing and forbidden feelings for Eight Beaufort, it’s impossible to know whom to trust and what to fight for. Millions of dollars and the fate of the founding families is at stake. Now Barrie must choose between what she feels deep in her heart and what will keep Watson’s Landing safe. 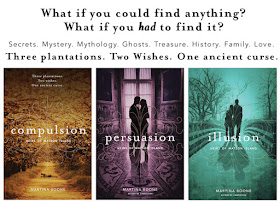 Hope you're enjoying the summer everyone!