We're excited to have Thomas E. Sniegoski join us to chat about his latest novel SAVAGE. 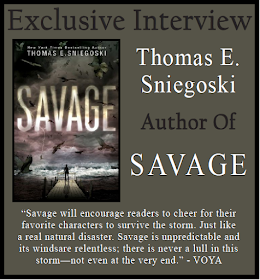 Thomas, what was your inspiration for writing SAVAGE?

As I mentioned in my [Author Question answer on Monday], SAVAGE was inspired by a series of killer animal books that I read voraciously as a kid in the 70's.

Most of the animal attack scenes were pretty tough to write. I had to really coordinate the action to make sure that it was believable--and scary! The death of our main character's parent was pretty rough to write, but I'm very proud of what I did with the scene. It was really emotional to write, and I hope people who read it feel what I was feeling when I was putting the words down.

Oh wow, if they could track down some of those killer animal books it would be great. Some of the best were written by this british author named James Herbert. The books that he wrote were The Rats, The Lair and Dominion. They're incredibly scary and well written and incredibly gross! Hahahhahahaha!

How long did you work on SAVAGE?

SAVAGE showed me that I get an enormous thrill out of scaring people, and that I'll probably be doing it for the rest of my life.

What do you hope readers will take away from SAVAGE?

I just hope that they come away having had really good time. I want them to feel like they've just experienced the most exciting, and thrilling of suspense (scary!) movies!

I'd done quite a bit of writing in comic books before my first book was written. I've written over thirty books before SAVAGE . . . And I don't have anything laying around unpublished. It's all out there.

Nope. I'm still getting those AHA! moments almost every day. I'm always learning stuff when I'm writing. Each new book teaches me something new about writing, and about myself.

My ritual consists of getting up every day at 5:00am and writing. Some books allow me to listen to music (movie soundtracks mostly, or classical) but some require silence. I'm currently working on SAVAGE 2 and that one is requiring silence right now. And I always work at home . . . Any other place would be too distracting.

My biggest advice is going to sound stupid but . . . Write! Write! Write! And then write some more! And read everything that you can get your hands on. Learn from other peoples styles.

Right now i'm writing SAVAGE 2. Not sure if that's the final title or not, but that's the working title. 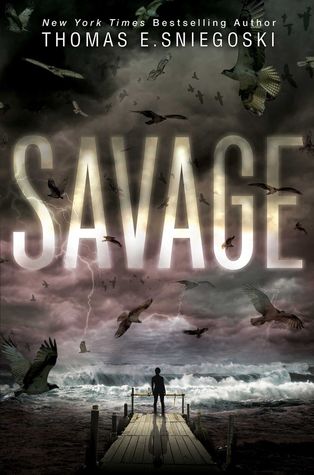 Sidney and her friends must race to find the origin of a storm that has hit their small island home—turning every animal into savage weapons—in this suspenseful thriller from New York Times bestselling author, Thomas E. Sniegoski.

The future is looking bright for Sidney Moore as she gets ready to leave the small island of Benediction behind for one of Boston’s top veterinary schools. Only a few small bumps in the road to navigate before she can go—her father’s recovery from a debilitating stroke, and her own guilt for ending her relationship with her high school sweetheart. But she’s always been strong willed, and she’s not about to let anything stop her from achieving her goals.

Now a storm is bearing down on Benediction, a hurricane that will bring devastating winds and rain, rising tides...and something else. Something deadly; something that will transform all the things that creep, crawl, and flutter into instruments of terror and death.

The future is looking bright for Sidney Moore…if only she can survive the storm.

THOMAS E. SNIEGOSKI is the author of more than two dozen novels for adults, teens, and children. His teen fantasy YA series Fallen was adapted into a trilogy of monstrously successful TV movies by ABC Family Channel. His other books for teens include Sleeper Code, Sleeper Agenda, and Force Majeure, as well as the upcoming series The Brimstone Network. The author's first adult novel, A Kiss Before the Apocalypse, hit the shelves in 2008, with its sequel, Dancing on the Head of a Pin to be released in 2009.

Sniegoski was born and raised in Massachusetts, where he still lives with his wife LeeAnne and their Labrador Retriever, Mulder. Tom recently completed the new young adult novel, Legacy, which is set to be released in October of 2009.

Have you had a chance to read SAVAGE yet? Do you have AHA! moments almost every day while writing? Do you learn from other people's styles? Share your thoughts about the interview in the comments!