Donna Freitas, author of UNPLUGGED, on writing being about habits

We're thrilled to have Donna Freitas with us to share more about her latest novel UNPLUGGED.

Donna, what was your inspiration for writing UNPLUGGED? 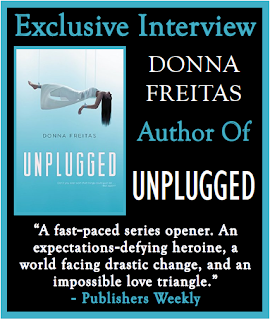 I’m a bit obsessed with technology, and the ways that people are constantly connected to their phones, looking at their phones, connecting to a virtual space as opposed to looking around and paying attention to the real world around them. I started to wonder if one day we might all decide to leave our bodies behind to plug ourselves into virtual reality permanently. Then I wondered what would happen if people were plugged in as children, even at birth, and would never know what it’s like to be in the real body. I realized I wanted to write a character who’d done this, and who was now returning to her real body and having to discover what it’s like to be in the real body all over again, and discover the real world with it.

But there is also a lot of action in this trilogy, so I hope that fans of the Divergent series, will also like them. There’s also a lot of romance, too, so readers that enjoy romances in general will hopefully enjoy this trilogy!

That when writing a trilogy, you have to keep a lot of balls in the air! And set everything up early—or at least lay the groundwork for all that will happen in the first book. That’s a lot to think about and carry for that first book. I have so much respect for series writers and all those trilogy writers out there after this. It’s not easy!

I work at home every morning (I never take a day off, even when I’m traveling)—and I mean, morning. Like, 5am morning. I’m cursed with being an early riser. I get up, make my coffee, and when the coffee is ready I sit down in my writing chair (it’s a chaise lounge) and I read for a while, until that moment I feel ready to write hits. But there always must be coffee. Coffee is essential. And I do like a nice piece of cake to go with it sometimes.

That writing is about habits—getting into the habit of writing, even if it’s only for 15 minutes a day. And also: don’t be afraid to set something aside to start something new and different. So much of what I write never gets published because it doesn’t pan out or I lose interest in it. Writing is a bit like throwing spaghetti at a wall to see what sticks. Keep throwing spaghetti, I guess is what I’m saying!

Sigh. The third book in this trilogy. The Body Market, the follow up to Unplugged, is already finished and the galleys will be out practically by the time that Unplugged comes out. And The Mind Virus is due to my editor at Harper really, really soon. Fingers crossed I’ll meet my deadline!

And thanks for having me on Adventures in YA Publishing! 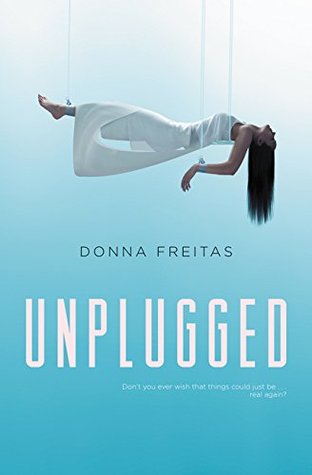 Donna Freitas is the author of both fiction and nonfiction, and she lectures at universities across the United States on her work about college students, most recently at Colby, Pepperdine, Harvard, and Yale. Over the years, she has written for national newspapers and magazines, including The Wall Street Journal, The New York Times, The Boston Globe, and The Washington Post, and she’s currently a non-resident research associate at the Center for Religion and Society at Notre Dame. Donna has been a professor at Boston University in the Department of Religion and also at Hofstra University in their Honors College.

Donna is the author of six novels for children and young adults, including The Survival Kit (FSG, 2011), named an ALA Best Books for Young Adults and the winner of the Bookstar Award in Switzerland, and This Gorgeous Game (FSG, 2010), also named an ALA Best Books for Young Adults, a winner of the CCBC Choice Award, and a Chicago Public Library Best of the Best winner. Her novel, The Possibilities of Sainthood (FSG, 2008), received five starred reviews and many accolades, including: an Indie Next Kids' List Great Read, Society of School Librarians International Book Award Honor Book, VOYA Top Shelf Fiction for Middle School Readers, and the Texas Lone Star Reading List. Donna has also published two middle grade companion novels with Scholastic, Gold Medal Summer (about a gymnast) and Gold Medal Winter (about an ice skater), which just won a CCBC Choice Award. In June, Unplugged the first novel in her sci-fi trilogy about two competing worlds, one real, one virtual, will be out in June from HarperTeen. She lives in Brooklyn.

Have you had a chance to read UNPLUGGED yet? Do you try to write every day, even if it's only a few minutes? Are you able to set something aside if it's not working to start something new? Share your thoughts about the interview in the comments!