Conflict. Can never get too little of it in real life. Can never get enough of it in a novel. Perhaps that is why it is so difficult for some of us to write strong conflict into our stories. Fortunately, multi-published Eileen Cook joins us today to share some insight on how to intensify the conflict for our poor characters. She is also celebrating the upcoming release of her newest book, WITH MALICE. Check it out at the end of the post!

Tips for Increasing Conflict, a Craft of Writing Post by Eileen Cook


In real life we might avoid conflict, but as readers we seek it out. We want to see characters in difficult situations, because trying to figure out how they will get themselves out is what keeps us turning pages. Common feedback we get as writers from editors and agents is that a story is missing enough conflict. No conflict = no story.

At the most basic level conflict is what gets in the way of your characters getting what they want. They may want love, to find a magical ring, to beat the vampire king, to solve a murder, or climb a mountain. If they can obtain that goal with no challenges then you have a very short story. A boring one. There are two types of conflict: Internal and External. Let’s explore how to increase both of these.

External Conflict is what is in the way of your character in the outside world. This may be a villain, a monster, or even a close friend who also happens to want the same goal. Here are some prompts to help you look for places in your manuscript to make the conflict even higher.

• Let the conflict build: Let characters stew until they suddenly explode with emotion. Instead of stating clearly what issue you want to have addressed, have your fictional characters dance around the real issue. There is nothing like confusion to make conflict more difficult and increase the chance of misunderstandings.

• Loss of Emotional Control: Instead of listening and reflecting on what is said, allow your characters to lash out, even before they might fully understand the situation. Because they are already formulating a response instead of listening, they increase the chance that they misunderstand what the other person is trying to say or do. Conflict is raised one step at a time, and the more emotional the characters become the more likely they quickly move up these steps. This increases the chance they will say something they’ll regret.

• Use Accusations: In real life we encourage people to focus on the situation, not the people. Fiction should follow the opposite behavior. Characters should use “you statements” not “I statements.” You statements put people on the defensive, such as, “you always do this!” I statements are personal and less accusatory, “I feel hurt when this happens.” In real life we often confuse what someone does with what it might mean. We turn: “You didn’t invite me to go with you for dinner” becomes “you don’t want to be my BFF anymore, you want to hang out with them instead!” What meanings does your character put on things that happen?

• Make the risk matter: What happens if your character doesn’t get what they want? In some cases the conflict is life or death- I need to stop the bad guy or he will blow up the world. But in many stories the risk isn’t real life or death, but it should feel like it to the character involved. If your character’s goal is to get a part in the school play, why does that matter to them so much? Often the goal is a placeholder for a bigger issue. For example:if I get a part in the play I will finally have my mom’s approval. What does your character think they might lose if they don’t win the conflict?

Internal Conflict is what is happening inside of your character that keeps them from moving toward their goal. A common saying is that we are often our own worst enemy. This is the idea that we often sabotage our own goals. Here are some things to consider when attempting to raise internal conflict.

• Wound/Trauma: Many of us have something that happened to us (often when we’re quite young) that shapes how we see the world. Maybe we had a parent pass away, or moved a lot and had difficulty making friends, or had something about our appearance that led to people making fun of us. Even when we think we may have moved on from whatever that traumatic experience was- we still carry around that baggage. If you had a huge nose that made kids tease you – even once you had surgery for a new nose and are stunningly beautiful- you may be very shy and feel that you are unattractive. What baggage does your character carry around? How do they see themselves compared to how others see them?

• Doubt: One of the biggest challenges to reaching our goals is the fear that we don’t have what it takes to reach that objective, or that we don’t “deserve” to get our goal. What does your character worry about when no one else is around? What do they tell themselves about their own abilities?

Hopefully these tips will give you something to consider as you try and increase the conflict in your own stories. While this might make your characters miserable (at least until they get to their happy ending) it will keep readers turning the page. 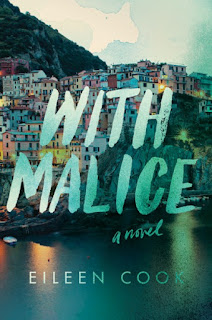 Eileen Cook’s new book WITH MALICE will be in stores June 7, 2016

For fans of We Were Liars and The Girl on the Train comes a chilling, addictive psychological thriller about a teenage girl who cannot remember the last six weeks of her life.

Eighteen-year-old Jill Charron's senior trip to Italy was supposed to be the adventure of a lifetime. And then the accident happened. Waking up in a hospital room, her leg in a cast, stitches in her face, and a big blank canvas where the last 6 weeks should be, Jill comes to discover she was involved in a fatal accident in her travels abroad. She was jetted home by her affluent father in order to receive quality care. Care that includes a lawyer. And a press team. Because maybe the accident...wasn't an accident. Wondering not just what happened but what she did, Jill tries to piece together the events of the past six weeks before she loses her thin hold on her once-perfect life.