Steve Watkins, author of GREAT FALLS, on embracing your failures

We're thrilled to have Steve Watkins here to tell us more about his latest novel GREAT FALLS. 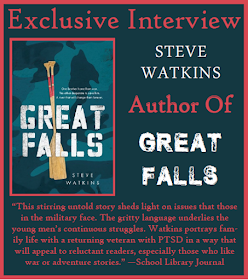 Steve, how long did you work on GREAT FALLS?

Two years on the novel through the actual writing and revising and editing and production, but the process actually started a year or so earlier when I wrote a series of in-depth nonfiction articles about a Marine family who opened up to me with the story of what happened to them when the dad, a Marine captain, went through multiple deployments in the Iraq and Afghanistan wars, and came home a wounded and severely damaged soul who could no longer connect with his wife and three young children. Captain Jason Haag and his wife Elizabeth were uncompromisingly honest with me about the terrible things Jason witnessed and had to do himself in the wars, and about his struggles trying to come back home and rejoin his family, which became harder and harder with each deployment, and finally all but impossible, until a service dog named Axel came into their lives.

Nothing, really. If you’re a young writer you shouldn’t be looking to someone like me for advice. You should just be throwing yourself into learning your craft. You should just be going for it. And you should be failing. Over and over and over. And embracing those failures, which aren’t really failures, of course, just like your successes at that age aren’t really successes. You should be reading tons of stuff, not just for content but critically, taking it apart, figuring out how the author did what he or she did and if it’s any good, or, god forgive, if it’s contrived, hackneyed, clichéd—i.e. false. And never, ever let yourself write anything that’s contrived, hackneyed, clichéd—i.e. false. Unless you do. In which case at least be honest with yourself about what you’ve done and promise never to do it again. You know what Samuel Becket said: “Ever tried. Ever failed. No matter. Try Again. Fail again. Fail better.” Well damn. That does sound like advice after all.


Opening and directing a nonprofit yoga studio where people pay what they can afford, and we make sure yoga is for everybody and not just rich people wearing their Lululemon fashions—free classes for kids in juvenile detention, at a school for emotionally and developmentally challenged teens, at a halfway house for juvenile offenders, at a Head Start program for disadvantaged preschoolers, at a support organization for people with HIV/AIDS. Planting trees and working as development director for an urban reforestation organization to combat in some small ways the ravages of global climate change and also to combat the increasing storm water runoff that’s killing the Chesapeake Bay. Promoting two new books in a middle grade series I’ve written for Scholastic called The Ghosts of War. Writing another book for Scholastic based on the true story of the youngest person to serve in the U.S. military during World War II—a 12-year-old kid from Texas who somehow talked his way into the Navy and served in combat in the South Pacific when he was 13 until his ship was attacked so fiercely by the Japanese that it was no longer seaworthy, and he was wounded, and his best friend was killed, and he was finally discovered to be underage and sent back home. 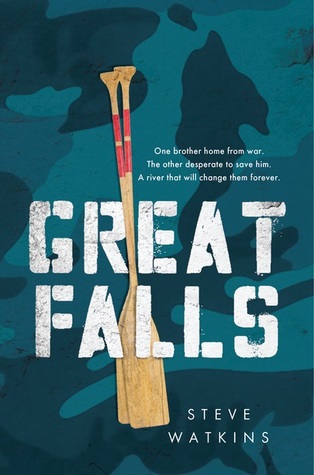 One brother home from war. The other desperate to save him. A gripping journey together to the river's end.

Shane has always worshiped his big brother, Jeremy. But three tours in Iraq and Afghanistan have taken their toll, and the easy-go-lucky brother Shane knew has been replaced by a surly drunk who carries his loaded 9mm with him everywhere and lives in the basement because he can’t face life with his wife and two small children. When Jeremy shows up after Shane’s football game and offers to take him to the family cabin overnight, Shane goes along — both to get away from a humiliation on the field and to keep an eye on Jeremy, who’s AWOL from his job at Quantico and seems to have a shorter fuse than ever. But as the camping trip turns into a days-long canoe trip down the Shenandoah and Potomac Rivers, Shane realizes he’s in way over his head — and has no idea how to persuade Jeremy to return home and get the help he needs before it’s too late. In a novel at once gripping and heartbreaking, Steve Watkins offers a stark exploration of the unseen injuries left by war.

Steve is also author of a short story collection, My Chaos Theory (2006, Southern Methodist University Press), which was a finalist for the Paterson Fiction Prize, and an Honorable Mention for the Library of Virginia Fiction Award. He also wrote the award-winning non-fiction book The Black O: Racism and Redemption in an American Corporate Empire, published in 1997 by the University of Georgia Press, which tells the story of the largest employment discrimination class action lawsuit in U.S. history. His fiction, poetry, and non-fiction articles have appeared in numerous publications, including The Nation, Poets & Writers, Mississippi Review, 100 Percent Pure Florida Fiction, North American Review, and The Pushcart Prize Anthology.

A graduate of Florida State University, Steve teaches journalism, creative writing, and Vietnam War literature at the University of Mary Washington. He also teaches Ashtanga yoga, and works as an investigator and advocate for abused and neglected children through the child advocacy organization CASA. He lives in Fredericksburg, Virginia with his wife Janet, and four daughters–Maggie, Eva, Claire, and Lili. Steve and Janet are co-directors of the religious education program at the Fredericksburg Unitarian Universalist Church.

Have you had a chance to read GREAT FALLS yet? Do you throw yourself into learning craft? Are you reading tons of stuff critically? Share your thoughts about the interview in the comments!