Our Red Light/Green Light Contest has been going on for over a month now, and it’s finally time to announce the winner as chosen by our agent judge, Kimberly Brower of RF Literary. 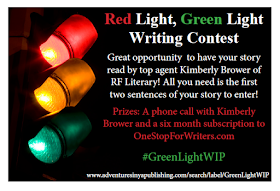 The winning entry will receive a 30-minute phone call with Kimberly, perfect for discussing manuscript ideas or asking publishing questions, as well as a 6-month gift subscription to One Stop for Writers!

Before we announce the winner, we’d like to share the pitches of the top 5 contest finalists, who all did such an amazing job. Our agent judge considered these pitches of 200 words or less, along with each of the top 5 finalists’ first chapters, when choosing the winner.

Here are the finalists’ pitches, in no particular order:

Author: J.A. Ward
Genre: YA Contemporary
Pitch: The summer before seventeen-year-old Roland Cruze's senior year was supposed to include afternoons at the batting cages and late night practices with his band. But three months before summer could begin, Roland hit and killed eight-year-old Jeremy Weaver with his car. Now, every happy moment prompts a paralyzing guilt, knowing he’s alive when Jeremy is not.

With Roland slipping further into despair, his best friend suggests he look for answers at Fates Bridge, an infamous spot in the city for suicide. If Roland could save just one person, maybe he’ll feel whole again.

The only hold up: Roland doesn’t know the first thing about crisis intervention. The plus side: On his quest to find someone to train him, he meets seventeen-year-old Cassie, a nose-studded waitress who seems even more broken than he is. Discovering her aunt is a suicide hotline director, he sweet talks his way into a meeting that evolves into lessons.

All the while, Roland pursues a closer relationship with Cassie in hopes that he finds someone who understands his guilt or—better yet—someone to save. But once revealed, her secret pain could be the thing that leads them both to Fates Bridge—and over the edge.

Author: Megan Snyder
Genre: YA Fantasy
Pitch: Princess Giathien was only supposed to wear a mask for one night. Her mother’s masquerade party is the event of the summer, a place for nobles to see and be seen. The king and queen of Tollauré flaunt their wealth and the prosperity of the kingdom for all of the surrounding territories to envy. Until the secrets of their pasts crack open Gia’s quiet and disciplined life. With the help of some new friends and donning a new mask, Gia sets out to right the wrongs of her parents and return the greatest treasure she didn’t know she had lost.

Author: Maggie Hasbrouck
Genre: YA Contemporary
Pitch: Born into the  exclusive world of Philadelphia’s legendary Muriel Avenue Sluts, seventeen-year-old  Julia Turnbow turns her life inside out when  the man who’s been  abusing her best friend winds up dead in the back yard.

The cherished  daughter in a long line of Muriel Avenue Sluts, Jules’s future has always been  secure. Just like all the women in her  family, she’ll become  a slut on her eighteenth birthday. Despite the family profession, Jules has never even kissed a boy. When she starts dating Charlie, kissing him and what comes next is all she can think about.

But when her  best friend reveals that she’s being abused, Jules's charmed life begins to  fall off its axis. The abusive man ends up dead in the back yard, and Jules is one of just two people who knows exactly what happened.

Then, just days after the suspicious death, Jules dives head first into a relationship with Greta, the daughter of the dead man. Greta’s a train wreck; she’s charming, unpredictable, and all too eager to weave Jules into her own carefully constructed plans. When things spiral out of control, Jules finds herself wanted by the FBI and fleeing from everything she's ever cared about.

Author: Amanda Perry
Genre: YA Other
Pitch: Devastated by her mother’s death and her father's abandonment seventeen year old Evelyn Wharton finds herself embroiled in murder surrounding an age old curse. She must prove her innocence and protect her secrets or she’ll lose more than just what’s left of her heart.

Author: Christy C.
Genre: YA Sci-Fi
Pitch: The space Colonies were constructed to save an overpopulated Earth, but Lia Yang-Lee has grown restless in her orbiting ship. As an engineering student, Lia appreciates 33rd century wonders. But, unlike her ancestors who dreamed of colonizing space, Lia dreams of exploring Earth.

When a time travel accident sends Lia aboard Callum Davis’ legendary pirate shuttle, she is unsure if meeting the subject of childhood nightmares is a blessing or curse. Considering Cal died 700 years ago, Lia’s inclined to pick the latter. More surprising than her time jump is the discovery Cal isn’t the villain textbooks claim he is, but a heroic outlaw. Fighting unfair policies that prevent the underprivileged from moving to elite space communities isn’t Cal’s only skill. His ability to charm the spacesuit off anyone leaves Lia wondering if his loot may soon include her heart.

Breaking away from the future and leaving her rigid Colony life is Lia’s shot at freedom, but Cal believes that remaining on a deteriorating planet could kill them both. The bounty on Cal’s head is further warning his story won’t end happily, unless Lia can figure out how to defy history to save the man she’s falling for.

Hopefully after reading these pitches, you can see why Ms. Brower had such a hard time choosing just one finalist!

And now, announcing our winner...

Congratulations, Megan!!! Our agent judge will be in touch soon to set up your phone call!

And for those who didn’t win this time, don’t worry! We have another fun contest coming up soon, so check back often!
Unknown at 6:00 AM