Delusions of a Published Author 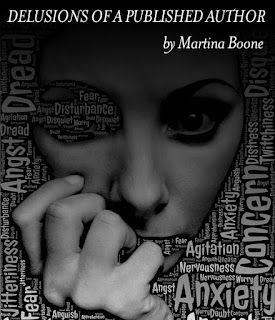 Once your book is published, it's all downhill and easy, right? The hard work is done, and you've learned how to achieve that success that you've spent years or decades working toward. All you have to do is collect your royalty checks, answer fan mail, and crank out a book now and then between glitzy book events.

The first published book is simply the first published book. It may be no better than an unpublished book that resides in a corner of your laptop hard drive collecting virtual dust, and there are likely a hundred or more unpublished books by other writers that are better written, more exciting, or more engaging. The truth is, once a book reaches a certain level of professionalism in terms of writing, plotting, characterization, etc., its fate comes down to the giant claw of luck that controls finding the right agent, the right editor, the right acquisition panel, and the right mix of other books in the publisher's pipeline. At least to a certain degree.

One of the most illustrative stories that I've ever heard is one that Veronica Rossi told at a workshop I attended shortly after her UNDER THE NEVER SKY hit the New York Times bestseller list. She had spent seven years working on a high fantasy, and she took it to a workshop with uber-agent Donald Maass. Don read the first fifty pages, told her it was great, and then told her it would never sell because it was too much like every other high fantasy out there.

In effect, what Veronica had done was what so many of us do, she had rewritten the books that she loved with her own stamp. There's nothing wrong with that--as writers, that's our version of putting training wheels on a bicycle. But it isn't ever going to result in the breakout book that we all long for.

Veronica, being brilliant, went home, thought about Don's advice, suffered through a lot of angst and heartbreak, and wrote UNDER THE NEVER SKY. She succeeded with that book because it combined the things she loved in high fantasy with something completely new, something that only she could have conceived. Three months after finishing that book, she had an agent, an editor, international deals, and a movie deal, but she'd spent eight years of dedicated writing getting to those three months.

So is that the key? Is a truly unique idea always enough? Does something original guarantee a sale?

The risk that we run when we climb out on that limb of creativity is that it will break from underneath us. Hollywood has an expression: they want something the same but different. Readers (and publishers) all have a comfort zone, and if we stray too far beyond that, it becomes difficult to sell our work. A book needs to be easily explained and easily shelved.

Those are the hard truths of publishing. Successful authors understand them.

But as writers, we are artists, and that's one of the hardest truths to face. Even when we are writing commercial fiction, we are subject to the vagaries of our creative obsessions and delusions. We are drawn to what we love, and we write what excites us. What excites us may not, always, excite everyone else quite as much, though. Bestselling author Sarah Dessen has twelve published books under her belt, and thirteen more that she's written in between those twelve that didn't make it. Thirteen books that, as she put it, were written out of fear and panic.

As writers, we plunge naked into the ocean of ideas. We create, and we fail. We suffer for that failure--or for the perception of failure. We suffer for that creativity. Writers have 121% more likelihood of depression and almost 50% higher rates of suicide than the general population. Libba Bray calls this Miles and Miles of No Man's Land. If we're lucky enough to finish a book, and sell it, we have to manage our expectations, because expectations are demon spawn.

I am musing on all of this as I wait for my agent to give me her verdict on the first book I have fully written since the Heirs of Watson Island trilogy. I love this book, love it, but did I go too far out on that limb? I tried to start it in more familiar territory to ease the reader in--was that a mistake? I simply do not know. Time will tell.

I know I was scared to finish this book. Even knowing that I was heading out to a book festival in Kentucky and was going to drive myself crazy if I still had those last two chapters hanging over my head, I found myself answering fan mail that could have waited a few more days instead. I updated the project's Pinterest board. I Tweeted like a demon. I bought a couple dresses online that I really didn't need. Suddenly everything but writing became more critical.

Fear Affects Us All in Strange and Ugly Ways

I did manage to finish the book, obviously, and then I got through the edits my critique partners suggestion. I forced myself through, giving myself deadlines, and promising myself rewards when I finished. We play the games we have to play. But the truth is that this writing thing never gets easier. Not really.

I remember meeting Libba Bray for the first time and practically crying buckets on her because I was so grateful for the blog post she had written in which she--yes, even Libba Bray--confessed she had the same panic I fears we all have.

A song can be written in a few hours. If it fails, it's a few hours of the songwriter's life. Writing book length fiction, we devote a year or more to a single work, and it has just as much or little chance as that song. But our long form of creativity is the music to which we dance, and that's the risk we take for the chance to do what we love.

In the end? I get paid to make stuff up. I get to share my worlds with others. That's pretty much the greatest job in the world, and I pinch myself all the time, knowing how fortunate I am.

I've still got the giveaway going on for both current books of the trilogy along with some things that relate to it. Enter by 5/17. : ) 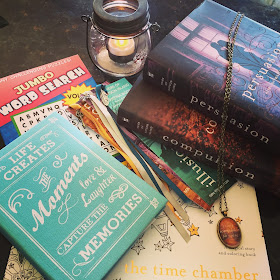