Turning Points: The Most Effective Way to Build a Compelling Story 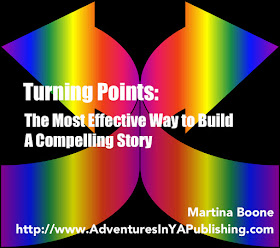 Whatever you are writing, and however you choose to go about writing it, you need to understand the five defining moments in your story, the turning points, before you can say your book is “done.” Without turning points, you can’t have a satisfying story. Period. Turning points are the problems and corresponding solutions, the tense moments when something begins to change, and the hinges that allow the events to unfold in fresh and meaningful way.

Characters and stories must change, and they do so through a series of connected and causal events. In other words, your character changes because of the problems they face and solve or don’t solve in the story, and similarly, the events in the story depend on who your characters ARE at the moment that the events occur. But the turning points on which character hinges and the story turns do have a relationship, and to create a story that rings true, you have to understand the difference between an emotional change in the character and the preceding or subsequent problem in the story. You also have to understand the function of the turning points and the way they relate to the inciting incident and the climax. In this case, terminology and the simplification of story into a formula has often led writers to be confused. Beginning writers very frequently confuse the inciting incident with what is often called the “first turning point” or “first plot point.” I believe that terminology is confusing, so I’d like to try simplifying it a bit.


There are five basic turning points in every story:

The Road Map to Story

Really, knowing the turning points is the most basic thing you need to know when you write your story. You don't need to know them before you write, though sometimes that is helpful. But after that first draft is done, make sure you get them crystalized, in your own mind and on paper. That will not only help you make the most of the big moments in your story, it will help you get the pacing right.

The first turning point is somewhere within the first twenty-five to thirty percent of your story. The trend is moving toward sooner rather than later to capture the attention of impatient readers. But for pacing purposes, the pages between each turning point get shorter to give the reader an increasing sense of urgency and momentum.

What’s the final turning point in The Hunger Games? In Divergent? In your own story or your favorite book? Do you agree that endings often revolve around showing a choice and decision?

"Beautifully written, with vivid characters, a generations-old feud, and romance that leaps off the page, this Southern ghost story left me lingering over every word, and yet wanting to race to the compelling finish. Martina Boone's COMPULSION is not to be missed." — Megan Shepherd, Author of THE MADMAN'S DAUGHTER