The Jump Start: Finding the Perfect Place to Start Your Novel 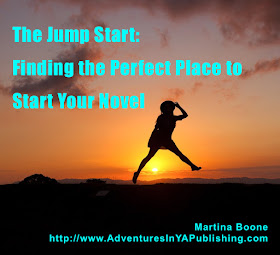 There's a big miscommunication that has crept into the discussion about how novels should begin. Agents, editors, and authors often tell new writers (and each other) to "begin with action." As writers trying to grab the attention of a reader, we often take that advice and make it bigger, thinking that "hooking" a reader is as simple as giving the reader "more" action or "more explosive" action.

We also often confuse the action start with the inciting incident. But they are not the same.

The inciting incident is the event or change that sets the central conflict in the book in motion. Before the reader can appreciate that change has occurred, though, the reader has to understand the ordinary circumstances in which the main character has been living.

There are unlimited ways to accomplish that. That's the key to everything in fiction. There are rules, but they are so loose that they leave writers nearly unlimited room between the cracks.

So how do you know where to start your novel? Don't spend as much time thinking about the inciting incident. Think more about the jump-start, the change and conflict that drop-kicks a protagonist with limited knowledge of a problem into action. Start where there's a whiff of change, and follow the change as it builds and builds, until facing the ramifications of that change become inevitable.

Let's break that down.

Your opening has to:

How do you find the best way to deliver that?

Start by thinking not of the story, but of the character.

Let's take Luke Skywalker as an example.
Beautifully elegant, right? There's a built-in twist, and there's already a hint that Luke's outer journey and the inner journey will conflict with each other.

Because Luke's story is the classic hero's journey, he doesn't know anything about the Empire, or Darth Vader, or anything that's about to be revealed to him as he follows the call to action. George Lukas could have written that story in any number of ways, but he chose to show the battle between the Empire and the rebels before he showed us a clueless Luke. That allowed us to see the selflessness of the rebels, their desperate need, and the evil that was the Empire as Lea puts the plans to the Death Star in the droid and shoots R2-D2 and C3-PO off in an escape pod as Darth Vader boards her ship.

Show the Story Question, the Main Problem, Right Away


By the time we meet Luke, we know that there are big problems afoot. Those problems take us to our hero, Luke, via the two droids and a snippet of a broken but clearly desperate message from Lea that needs to be delivered. The droids ultimately lead Luke to Obi-Wan Kenobi, who then sets him on the path of the real adventure of his outer journey. But by the time that Luke knows what that journey will be, we have already seen his longing for adventure, the basics of his inner journey. He doesn't want to stay with his aunt and uncle on their farm, no matter how much they need him. He wants to go learn to be a fighter pilot.

Not only does this beginning let us see how Luke struggles between the call to adventure and personal glory versus duty, but we also get a hint, via a conversation between his aunt and uncle, that things have not ended well with Luke's father and that he shows the same character traits that led to that end. Via the droids, Luke's outer journey crash lands into his life in a way that precipitates his inner conflict and points toward his inner journey. The lure of Lea's message is the call of adventure. He can't stop thinking about it, but though he speculates that Obi-Wan may be old Ben Kenobe, there's nothing clear for him to do until R2-D2 sneaks off from the farm to go find Obi-Wan. Luke follows him and is captured by Sandpeople and then saved by Ben, who does indeed turn out to be Obi-Wan. Even when everything is explained to Luke and he is offered the chance to join Obi-Wan in delivering the Death Star plans to the rebels and to learn the ways of the Force, Luke is able to decline. When, however, he returns to the farm, he finds his aunt and uncle murdered by Imperial troopers who have been searching for R2-D2 and C3-PO. Now, finally, with his home gone, there is no turning back and our reluctant hero has no choice but to join the rebels.

Getting to the Perfect Starting Place

Often, when I begin a new story, I start with an image or a snippet of story that I want to explore. I don't yet know my characters or what they need. I start with one small problem, and I resolve that only to encounter the next problem, or I don't resolve it and make it a bigger problem, and I keep going that way until I reach the end where the problem really is resolved. But this works well for the story only if I stumble on the right opening image right away. It also means that I have to identify my turning points later so that I can tweak the pacing. That's perfectly viable, but speaking personally, it means that I end up rewriting the opening many times.

What am I looking for as I rewrite and what is different about the opening on which I finally settle? More often than not, I'm not happy until I have found the exact moment when my main character encounters something that will show the conflict she faces internally and also the problem that she must overcome. Those can be two different scenes, or one scene.

George Lukas didn't begin Star Wars on the farm weeks before the adventure comes to Luke. He began with the big picture problem, then carried that problem to Luke when his uncle bought the droids and Luke, on cleaning R2-D2, discovered the fragment of message.

Where, When, and How is Change Introduced?

In your own story, therefore, think of the point where change is introduced. What's new on the farm? Luke's uncle buys the droids. That's where Luke's story begins. But even before that, what's different with the rebels? They've got the plans for the Death Star, but Darth Vader is after them. Lea puts the plans in the droid and launches them into space. Change meets change. More than that. Change causes change.

What I look for when choosing the right moment to start a story is the moment where, when, and how my main character will encounter something that will show the conflict she faces internally and also show the problem that she must overcome.

If you need help brainstorming that scene or scenes, here are a few questions to ask yourself:
Happy writing!

How do you know when and how to start your novel?

Martina Boone is the award-winning author of Compulsion and the romantic Southern Gothic Heirs of Watson Island trilogy for young adults from Simon & Schuster, Simon Pulse as well as the Celtic Legends series for adult readers beginning with Lake of Destiny. She is the founder of the First Five Pages Workshop and AdventuresInYAPublishing.com, a three-time Writer's Digest 101 Best Websites for Writers Site as well as YASeriesInsiders.com, a site dedicated to encouraging literacy and reader engagement through a celebration of series literature. She's on the Board of the Literacy Council of Northern Virginia and runs the CompulsionForReading.com program to distribute books to underfunded schools and libraries.