K.C. Held, author of HOLDING COURT, on writing on a treadmill desk

We're delighted to have K.C. Held here to tell us more about her debut novel HOLDING COURT. 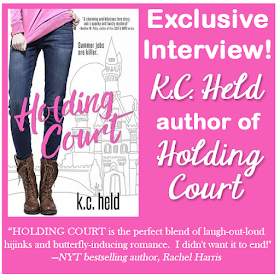 K.C., what was your inspiration for writing HOLDING COURT?

I’d always wanted to try my hand at writing a mystery, and I love the fast-paced mix of humor and mystery in Janet Evanovich’s Stephanie Plum series so I decided to see if I could take this wacky idea I had about a character who blurts out random statements that turn out to be premonitions and mold it into a YA mystery along those lines.

How long did you work on HOLDING COURT?

It took me forever to finally sit down and write it, but once I did, I wrote most of it over the course of two weeks. Which is how I learned that two weeks is about my limit for writing at that kind of pace! It took me another two months to finish the rough draft, then I spent about five months revising with the help of my critique partners before I was ready to start querying agents with my gloriously shiny new manuscript!

I have an office at home where I work, although sometimes I do like to go somewhere else just to mix things up. I generally start my writing ritual with a giant cup of tea (English Breakfast with milk and sugar) in the morning. Then I put on some workout clothes and hop on my treadmill desk. I can’t listen to music with lyrics when I write but I do like to have specific songs for a book that I use as a kind of warm-up. I usually write in two-hour chunks, and on a good day I’m shocked to see that two hours have gone by. After that my legs need a break, and then I’m back at it again. I just got a desktop computer after using a laptop for years and I’m currently in awe of the humongous (in comparison) screen I now have to look at.

I’m a huge fan of Meg Cabot and Ally Carter, I hope Holding Court will resonate with readers who also love their books! 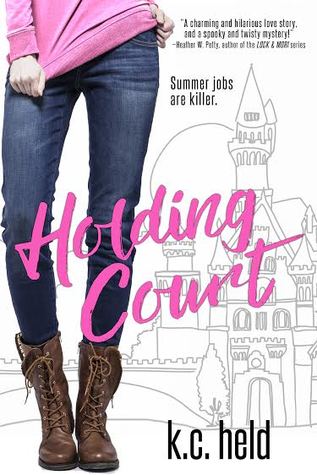 Sixteen-year-old Jules Verity knows exactly what's in store at her new job at castle-turned-dinner-theater Tudor Times. Some extra cash, wearing a fancy-pants dress, and plenty of time to secretly drool over the ever-so-tasty--and completely unavailable--Grayson Chandler. Except that it's not quite what she imagined.

For one, the costume Jules has to wear is awful. Then there's the dead body she finds that just kind of...well, disappears. Oh, and there's the small issue of Jules and her episodes of what her best friend calls "Psychic Tourette's Syndrome"--spontaneous and uncontrollable outbursts of seemingly absurd prophecies.

The only bright side? This whole dead body thing seems to have gotten Grayson's attention. Except that the more Jules investigates, the more she discovers that Grayson's interest might not be as courtly as she thought. In fact, it's starting to look suspicious...

K.C. HELD was born and raised in California with stopovers in Honduras, Mexico, and France. Married to her high school sweetheart, and mom to two avid bookworms, she holds an MFA in costume design and has worked as a freelance costumer in opera, theater, film and television. Although she once spent a summer working in a castle, there were no dead bodies involved.
--
Have you had a chance to read HOLDING COURT yet? Do you find you can write quickly if you've been thinking about an idea for a long time? Have you ever used a treadmill desk? Share your thoughts about the interview in the comments!