Jenny Manzer, author of SAVE ME, KURT COBAIN, on doing what you can to keep writing

We're delighted to have Jenny Manzer here to tell us more about her debut novel SAVE ME, KURT COBAIN. 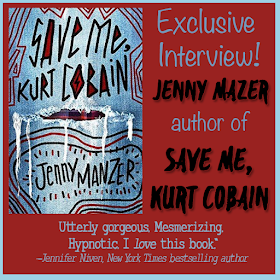 Jenny, what was your inspiration for writing SAVE ME, KURT COBAIN?

In March 1991, Nirvana played a show in Victoria, British Columbia, where I live. The cool club that usually hosted the best bands was booked, so Nirvana ended up playing an uninspired bar called The Forge. There was a small crowd and an AC/DC cover band opened. Just a few months later Nirvana’s album Nevermind was released and became one of the bestselling albums of all time. The small, forgettable show in Victoria intrigued me, and I began to think: “What if this, what if that?”

The hardest to write was the one scene involving violence. I didn’t like to put Nico in harm’s way! One of my favorite scenes is when Nico climbs upstairs to the attic of her home and finds a box of items that belonged to her mother—but were kept from her. Nico pounds the floor and pink insulation crashes down like cherry blossoms, and we know her world won’t ever be the same.

I would like think the book shares some of the quirkiness of WHERE’D YOU GO BERNADETTE. They both involve the mystery of a missing person and are set in the same part of the world—the Pacific Northwest.


What do you hope readers will take away from SAVE ME, KURT COBAIN?

I hope the story stands as one about the healing power of friendship and music, and the importance of letting both into your life. I also hope the book might introduce Kurt Cobain, as a musician and a person, to some younger readers who might not know about his legacy. Whether you are a super fan or not, his lasting influence on rock and popular music cannot be denied.

I would say, no matter what—do what you can to keep writing, even if its only 200 words before bed, or during a coffee break at work. You never know when something is going to spill out on the page that might be new and wonderful, or even just a pleasing phrase. But you won’t find out if you don’t keep writing. Plus, if you write regularly, you can afford to have days when the words are a struggle, because you know you’ll be right back at it. It can help take the pressure off.

I am working on a YA novel about young women on an elite track team, and what happens when a very questionable coach arrives at their city high school. It’s about some of the issues young athletes can face, but it’s also about strong female friendships, being a girl and a kick-ass athlete, and, oh yes, love conquering all. 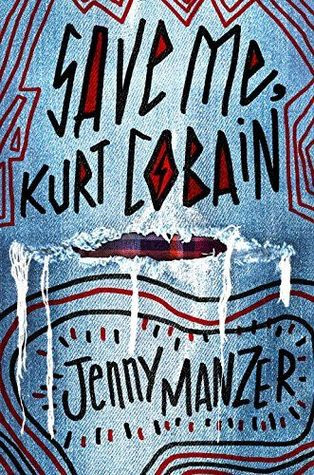 What if you discovered that Kurt Cobain is not only alive, but might be your real father?

Nicola Cavan has been an outsider since age four when her mother vanished from their home in Victoria, British Columbia. Now 15, Nico is determined to find her beautiful, music-obsessed mother. After glimpsing “Cobain” on a ferry from Seattle, Nico follows the man with the blazing blue eyes to a remote Vancouver Island cabin—and her life will never be the same.

This nuanced and bittersweet YA debut will keep you guessing until the end.

She has worked as a newspaper reporter, magazine editor, and an investigative journalist, and has loved writing stories ever since she was a little girl. Now that she has two children of her own, she does most of her writing (and listening to Nirvana) at night while they’re asleep.

She was born in Toronto, but was won over by the wild West Coast while attending the University of Victoria’s writing program. She’s a sucker for a big dog, an airline seat sale, or a winding trail.

She used to be afraid of clowns, but is so over that. Really. Send them on in.
--

Have you had a chance to read SAVE ME, KURT COBAIN yet? Do you have a hard time writing violence toward your characters? Do you write regularly? Share your thoughts about the interview in the comments!