Darren Shan, author of ZOM-B GODDESS, on serving the needs of the story

ZOM-B GODDESS is the final book in the Zom-B series, and we're thrilled to have Darren Shan here to tell us more about it.

The ending was tricky for me, because it wasn’t the end I originally planned. When I started Zom-B, a lot of the overall plot was unclear, but I was sure of the ending – I even knew what the final line would be. But as I progressed through the novels, the main character, B Smith, evolved in ways I hadn’t anticipated, and I started to sense that my ending would no longer work. I wrote it as planned when I was writing the first draft of Zom-B Goddess, but when I returned to edit it, I had to change it. Luckily the plot presented me with a fitting alternative ending, so it wasn’t any great trouble to change it, but I’m pleased that I was able to make that call, and not stubbornly stick with the original ending, just because that was what I wanted to happen. When a book’s going well, it’s not always about doing what you want as a writer, but rather serving the needs of the story.


How long did you work on ZOM-B GODDESS?

It taught me that the story is always king. You can guide it to a certain extent as an author, but ultimately you have to let it lead you, rather than the other way round.

What do you hope readers will take away from ZOM-B GODDESS?

I really, really hope they enjoy the end. It’s hard, when you write a long series, to satisfy every reader, because they spend so long with the characters and plot lines. I think the ending will feel right for what’s gone before, and that’s ultimately the most a writer can hope for the finale of a long series. But time will tell!

I’m working on a new series. It’s still very early, so I can’t say much about it, except it’s not horror (though it has a dark edge), and it will probably be my longest (page count wise) and most ambitious to date. I just never learn... 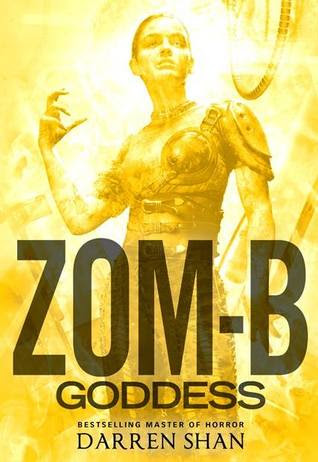 Darren Shan (born July 2, 1972 in London, England) is the pen name of the Irish author Darren O'Shaughnessy, as well as the name of the protagonist of his book series The Saga of Darren Shan, also known as The Cirque Du Freak Series in the United States. He is the author of The Demonata series, as well as some stand-alone books, and a series of books for adults under the alternative name of D.B. Shan. You can find out more about him at his website.

---
Have you had a chance to read ZOM-B GODDESS yet? Are you able to work on multiple novels in various states? Do you let the story lead you while writing? Share your thoughts about the interview in the comments!