When a Standalone Turns into a Series by Lynn Carthage + #Giveaway

Please welcome back author Lynn Carthage today. She's here to celebrate the release earlier this week of Betrayed, book 2 in The Arnaud Legacy series. And speaking of series, she shares some really good insights on how to craft one and how to plant those little surprises along the way. Lynn is also giving away a copy of Betrayed. Check it out below!


It's hard enough to write one novel; another level of trauma gets applied when one tries to write series fiction. Each novel must have its own storyline, but must also dole out bits and scraps about a larger plot that will unfold over the many books of the series.

When I wrote Haunted, I didn't think of it as the beginning of a series. It was based on a nightmare and was a standalone book. My literary agent suggested that I think about it as the first book in a trilogy. I brainstormed and wrote a few paragraphs' worth of plot for what might happen in books two and three. On the basis of those ideas, the book sold as a trilogy: and I was suddenly on the hook to make those loosely-glimpsed plots come alive.

It's been a cool challenge, and one that has forced me to stretch as a writer. Any book I've written previously has arisen out of a need to tell a story which engaged me. This is the first time I've had to write as an "assignment." I've loved the task it's presented and the new way of thinking about story production.

When I wrote out the ideas for the second and third books, I wrote them simply as a continuation of events in the first book. It hadn't yet occurred to me what I mentioned in the introductory paragraph above: that there would need to be a larger story that unfolded over the three books. To use a very famous example of the "larger story": in the Harry Potter series, it's finding out what happened to Harry's parents and how that set Harry up for the battle he faces.


Luckily, I realized I needed a larger story in time to get a few hints for that storyline into Book One before it went into production.

EMBEDDING HINTS FOR THE LARGER STORY
The ideal situation would be writing all three books first and having the luxury of time to properly sow the seeds. However, I know current wisdom about writing series fiction states that a writer shouldn't invest so much time without knowing yet whether the first will sell; why spend years writing a trilogy if the concept is unsaleable?

It's a tricky issue. You want to write the first book as a standalone, including hints for the rest of the series...but not such overt hints that they would mar the book if it's indeed published as a standalone.

In my case, I was given a year to write each of the subsequent books, a generous and fair schedule from my publisher. I was offered the chance to have the books release in six-month increments but didn't think I could realistically hit the deadlines.

Once I'd signed the contract, I should've rushed to write "quick and dirty" drafts of books two and three to more effectively assess the embedding of the larger story. But real life intrudes: young children, jobs, reading Pride and Prejudice five more times. I was joking above when I said that writing series fiction is traumatic. It shouldn't be if one has decent time management skills. :)

ANOTHER CONCERN
Another issue with series fiction is that readers may not read the books in order. In fact, a statistic I came across once indicated that in fact it's pretty rare for a reader to progress through a series in the order intended. In some cases, this is great: a secret revealed in the first book can get another unveiling in the second for unsuspecting readers.

It does, however, create a problem in terms of not giving away events from preceding books, to preserve suspense for the reader who backtracks to read them. I've done my best to have characters make oblique references to past events rather than spelling them out. This rewards readers who know, and can be glossed over by those who don't.

OPPORTUNITY FOR SHIFTING PERSPECTIVES
A writer friend suggested that since I had three important teen characters in Book 1, maybe I should let each "have" their own book in the trilogy. Thus, Haunted is narrated by Phoebe, an American teen who moves to England; Betrayed is narrated by Miles, her English maybe-boyfriend; and Avenged (which will release in February 2017) is narrated by Eleanor, their friend.

Series fiction permits creative shifting of perspectives: a main character could appear at different ages, could solve a mystery in a different locale, could seek a different object each time. It's a fun experiment to think about how to frame the story in each installation.

I hope readers enjoy Betrayed, which released on Tuesday. It's Book 2 of my Arnaud Manor trilogy. You don't need to have read the first book Haunted to read Betrayed, which is set in Paris and Versailles and involves time travel for those who want to see the guillotine blade descend.

Find me online at www.lynncarthage.com or on Twitter at @LynnCarthage. 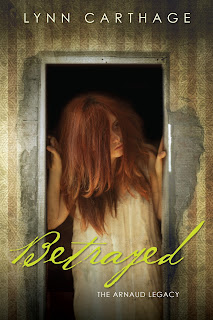 When Phoebe Irving moved from San Francisco to my English country village, we discovered how much we have in common. We also realized that her family's home, the Arnaud Manor, has a twisted history that goes back centuries. Though the bloodthirsty Madame Arnaud is finally gone, a trip to the palace of Versailles in France proves that trouble still haunts us. With our friend Eleanor's help, we're trying to figure out the Arnaud legacy and our role in it . . . and whether the future holds the chance for Phoebe and me to make a real connection.

Boy meets girl. Obstacles arise. Love conquers all. You know the routine. But sometimes those you trust the most wind up betraying you. . . .


Lynn Carthage is a novelist living near Sacramento. Under her real name, she was a Bram Stoker Award finalist. Born in Vermont, Lynn has lived in Maine, Ireland, and Arizona. She reads voraciously, loves anything French, gets “itchy feet” to travel on a regular basis, and finds peace in the woods, in meadows, in nature. She has always been fascinated by how history allows us to imagine how people of the past lived and breathed and felt.