Victoria Scott, author of TITANS, on being inspired by a commercial

We're excited to have Victoria Scott with us to talk about her latest novel TITANS. 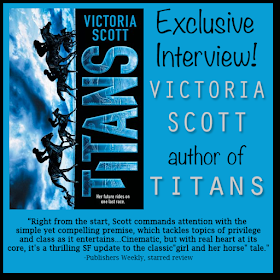 Victoria, what was your inspiration for writing TITANS?

A commercial, actually. It was this one by Acura. I saw it while watching a football game, and nearly flew from the couch to my office to call my agent.

How long did you work on TITANS?

This book took me a little longer than my previous titles. Maybe that's because I had to pause to have a baby halfway through. From first sentence to turning it into my editor, I believe it took six months. Not too bad now that I think about it.

What do you hope readers will take away from TITANS?

I hope they'll see themselves in Astrid Sullivan, and I hope they'll explore the themes I've included: trust, friendship, and gambling on yourself. 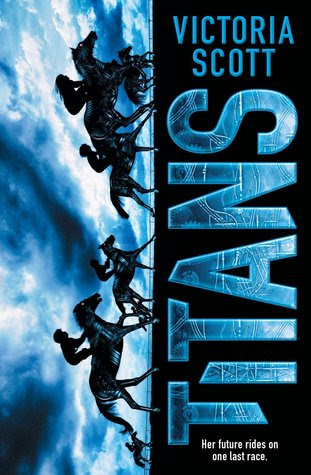 Ever since the Titans first appeared in her Detroit neighborhood, Astrid Sullivan’s world has revolved around the mechanical horses. She and her best friend have spent countless hours watching them and their jockeys practice on the track. It’s not just the thrill of the race. It’s the engineering of the horses and the way they’re programmed to seem so lifelike. The Titans are everything that fascinates Astrid, and nothing she’ll ever touch.

She hates them a little, too. Her dad lost everything betting on the Titans. And the races are a reminder of the gap between the rich jockeys who can afford the expensive machines to ride, and the working class friends and neighbors of Astrid’s who wager on them.

But when Astrid’s offered a chance to enter an early model Titan in this year’s derby, well, she decides to risk it all. Because for a girl from the wrong side of the tracks, it’s more than a chance at fame or money. Betting on herself is the only way she can see to hang on to everyone in the world she cares about.

Victoria Scott is the author of TITANS, FIRE & FLOOD, SALT & STONE, HEAR THE WOLVES (2017), and VIOLET GRENADE (2017). She is published by Scholastic and Entangled Teen, and is represented by Sara Crowe. Her latest novel, TITANS, has received two starred reviews, and FIRE & FLOOD was nominated as a YALSA Teens' Top 10 book of 2015. Victoria's novels have been translated into eight foreign languages. The author lives in Dallas, and loves hearing from readers.
--

Have you had a chance to read TITANS yet? Has a commercial inspired an idea for your novel? Are you impressed it only took Victoria six months to turn in the book since she had a baby during that time? Share your thoughts about the interview in the comments!