Secrets, Lies, Mistakes, and Wounds: The Trick to Creating Engaging Characters in Fiction (Part One) 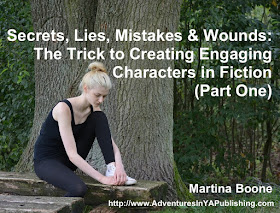 We all lie. We may not admit it, we may not even know it, but we do. And those of us who are loudest to proclaim our honesty are often those who lie the worst. All we have to do is look at the current political campaign with a clear eye to see human nature in all its brutal glory. There are  candidates so convinced of their superiority that they can't see or (at least admit) the complexity of any issue or implementation. Other candidates are so eager to achieve a goal that they will bend the truth in any way necessary. Still others have studied what to say to sway voters to the point where they can hardly find their own voices, and others are so mired in proclaiming that the system is broken that they cannot offer viable solutions. And for every message, there is a willing ear who is able to tune out the doubts and filters that automatically alert us to the lies.

The reasons are as unique as fingerprints. Each of us measures truth according to our own individual barometers. Our definitions of truth bend and flex in ways that shield us from the lies we cannot bear to face. That's what makes us interesting as human beings, and that, also, is what makes for fascinating characters in fiction.

Whether we are writing commercial fiction, or literary fiction, or something in between, we have to understand the importance that emotional wounds and self-protection mechanisms play for both our characters and our readers. Characters who act but at the same time delude themselves, protect themselves, is the key to writing characters that resonate with readers.

Take some of the most iconic characters in fiction: Indiana Jones, Katniss Everdeen, Edward Cullen. The list goes on and on. They are each, in some way, larger than life, but they are humanized by their vulnerabilities.
Consider how these vulnerabilities and emotional wounds made those characters behave and how that shapes the decisions they make that in turn drive the plot of each respective book or film. Some of my most loved scenes stem directly out of those wounds.

Next week in part two of this series, I'm going to provide a list of questions to ask yourself when developing emotionally wounded characters, including tips on for creating internal wounds that aren't generic and how to be true to the characters that you create. In the meantime, think about other wounded characters who've made you fall in love with them--both in fiction and in life. Who do you love and how are they broken?

How thoroughly do you consider character wounds and emotional vulnerabilities when you are writing or planning your writing? What about when you're reading? Is it a high priority? A high enough priority?

What scenes do you love that were caused by a character's secret wounds?

Martina Boone is the author of Compulsion and Persuasion, out now in the romantic Southern Gothic Heirs of Watson Island trilogy from Simon & Schuster, Simon Pulse. Illusion, the final book, will be out in October of 2016. Martina is also the founder of AdventuresInYAPublishing.com, a three-time Writer's Digest 101 Best Websites for Writers Site, and YASeriesInsiders.com, a site dedicated to encouraging literacy and reader engagement through a celebration of series literature. She's on the Board of the Literacy Council of Northern Virginia and runs the CompulsionForReading.com program to distribute books to underfunded schools and libraries.
Martina Boone at 6:00 AM