Lisa Maxwell, author of UNHOOKED, on working on a book for years

We're excited to have Lisa Maxwell join us to talk about her latest novel UNHOOKED. 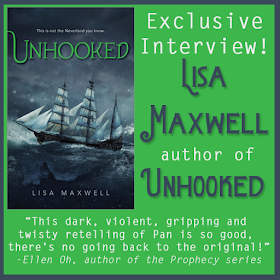 Lisa, how long did you work on UNHOOKED?

UNHOOKED was a long time coming. The book started as my 2011 NaNoWriMo project, but when I was done, it was a hot mess. I revised it for almost a year before I queried it, and then it went through a round of revisions and two agents before it went on submission. After the first round of submissions didn’t pan out (no pun intended), I revised the book again, changing it from past tense to present tense. That was back in 2012. So I’ve been working on one version of this or another for over four years, and I’ve gone through two agents and countless revisions for this book, so I’m so excited my characters finally are making their way out into the world.

What is your favorite thing about UNHOOKED?

My favorite thing about UNHOOKED is the way I’ve gone back to the source text and revived the darker aspects of it. When I was re-reading Peter and Wendy, there was one line that really struck me, that Peter would “thin” the lost boys out when they got too old or too plentiful and that “I never remember them after I kill them.” Those lines certainly didn’t speak to any Disneyfied version of Neverland, and I wanted to bring that sense of danger back to the story. In my Neverland, Pan doesn’t remember those he’s killed, because memory isn’t something that lasts in Neverland. The erosion of memory is one of the most dangerous parts of my story, and it’s something I took from the original story itself. In Barrie’s original tale, it made Neverland a fantastical adventure, but also a dangerous place, and I hope it does the same for mine as well.

Oh, and my pirate… I can have two favorite things, right? ;O)

I’m currently working on my 2017 book, which is untitled at this point. I’ve pitched it as Gangs of New York with Magic. But there’s some time travel involved too, and I’m really excited about how it’s coming together.

For as long as she can remember, Gwendolyn Allister has never had a place to call home—all because her mother believes that monsters are hunting them. Now these delusions have brought them to London, far from the life Gwen had finally started to build for herself. The only saving grace is her best friend, Olivia, who’s coming with them for the summer.

But when Gwen and Olivia are kidnapped by shadowy creatures and taken to a world of flesh-eating sea hags and dangerous Fey, Gwen realizes her mom might have been sane all along.

The world Gwen finds herself in is called Neverland, yet it’s nothing like the stories. Here, good and evil lose their meaning and memories slip like water through her fingers. As Gwen struggles to remember where she came from and find a way home, she must choose between trusting the charming fairy-tale hero who says all the right things and the roguish young pirate who promises to keep her safe.

With time running out and her enemies closing in, Gwen is forced to face the truths she’s been hiding from all along. But will she be able to save Neverland without losing herself?

Lisa Maxwell is the author of Sweet Unrest, Gathering Deep, and Unhooked (Simon Pulse, 2-2-16). When she's not writing books, she's an English professor at a local college. She lives near DC with her very patient husband and two not-so patient boys.

---
Have you had a chance to read UNHOOKED yet? Have you stuck with a novel through years of revision? Are you surprised by the darker tones of some of the original pre-Disney stories? Share your thoughts about the interview in the comments!