Hearing Voices: A Craft of Writing Post on POV by Hannah Barnaby

Please welcome Hannah Barnaby to the blog today. She's here to share some insight on a subject every writer must question with every book we write. What point of view is the best choice to tell this particular story? Hannah breaks it down for us, the good and the bad.

Also be sure to check out Hannah's upcoming release, Some of the Parts, below -- a story told in first person present tense.

Hearing Voices: Finding the Right Point-of-View for Your Story by Hannah Barnaby

Last year, I attended a workshop at the Writing Barn in Austin, Texas. Nicole Griffin, Tim Wynne-Jones, Anne Bustard, and Joy Preble—all brilliant writers and lecturers—led us through talks on a variety of subjects, including point-of-view. And while everyone in attendance agreed that first person is the current standard in young adult fiction, we also issued a collective sigh as we realized that we were denying ourselves the delicious opportunities that come with other viewpoints.

There are pros and cons to every point-of-view, of course.

Bad: Limited ability to show the reader anything beyond what the MC knows. Melodrama.

Good: Unique opportunity to put the reader in the center of the story (see Julie Berry’s All the Truth That’s in Me and Tim Wynne Jones’ Blink & Caution).

Bad: Almost impossible to pull off without making your MC sound insane.

Good: Allows for a wider scope of action and character development. Much easier to follow the “show, don’t tell” rule.

Bad: Can feel too formal for contemporary fiction. Puts distance between the reader and the characters.

My first novel, Wonder Show, was historical fiction, the story of a traveling carnival sideshow in 1939. From the moment I began drafting the story, there was no question in my mind that third person was the sensible choice, and it was working just fine until I realized that the only character I really knew was Portia, the heroine. She was surrounded by sideshow performers with fascinating backstories—many of whom I had based on real people I’d learned about in my research—but they wouldn’t share those stories with her because she was a stranger and that is not how carnivals worked. I started writing short, first person monologues from the points-of-view of the other characters. At first these were for myself, so I would understand who these people were and how they felt about Portia and each other, but then it felt unfair to deny them a chance to speak in the book. Especially when they had already been silenced by history. So the pieces remained in the manuscript and eventually in the published book.

In my second novel, Some of the Parts, I went in a completely different direction and wrote the story in first person, present tense. Again, it wasn’t really a tough choice: the main character, Tallie, is searching for her brother’s organ recipients, and her judgment (and, at times, her safety) is in question. Writing the story in third person or past tense would have undercut the immediacy of what Tallie was feeling as her journey unfolded, and the sense that the reader is along for an unsettling ride. I needed to be inside Tallie’s head as much as possible and I needed to take the audience with me.

My current project (nameless, as of yet) is another matter. I wrote a hundred pages in first person. Then I wrote three chapters in third. Then my editor gave me some feedback that changed the whole story and I started again from the beginning. I still haven’t figured out the best point-of-view for this story, but here are the questions I’m asking myself:

Once I’ve found the right voice for the story, I have one of the most important elements in place and I’m on my way. How do you select a point-of-view for your work? 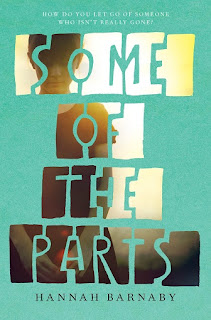 For months, Tallie McGovern has been coping with the death of her older brother the only way she knows how: by smiling bravely and pretending that she’s okay. She’s managed to fool her friends, her parents, and her teachers, yet she can’t even say his name out loud: “N—” is as far as she can go. Then Tallie comes across a letter in the mail, and it only takes two words to crack the careful façade she’s built up:

ORGAN DONOR.
Two words that had apparently been checked off on her brother’s driver’s license; two words that her parents knew about—and never revealed to her. All at once, everything Tallie thought she understood about her brother’s death feels like a lie. And although a part of her knows he’s gone forever, another part of her wonders if finding the letter might be a sign. That if she can just track down the people on the other end of those two words, it might somehow bring him back.

Hannah Barnaby’s deeply moving novel asks questions there are no easy answers to as it follows a family struggling to pick up the pieces, and a girl determined to find the brother she wasn’t ready to let go of.
Amazon | Indiebound | Goodreads

Hannah Barnaby is a former children's book editor and bookseller, and was the inaugural children's writer-in-residence at the Boston Public Library. Her debut novel, Wonder Show, was a Morris Award finalist in 2013. She lives in Charlottesville, VA with her family. You can find her online at www.hannahbarnaby.com and follow her on Twitter @hannahrbarnaby.