Sara B. Larson, author of ENDURE, on writing something she didn't plan or want to do

ENDURE is the final book in the Defy series, and we're delighted to have Sara B. Larson here to tell us more about it. 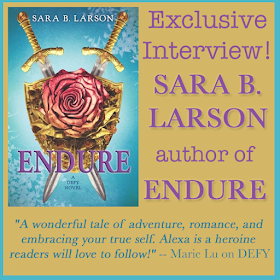 What was your inspiration for writing ENDURE?

I’ve known how this story would end since I wrote the first book in the DEFY series. But it’s always different actually writing it as opposed to dreaming about it and plotting it. As I worked on this final book, I definitely was inspired by the many events that originally led to me write DEFY, which fostered the continuing themes of love, loyalty, overcoming grief, and pain to find hope and joy again. These themes span the entire series, but especially in ENDURE.

There is a scene about halfway through the book that went differently than I’d anticipated. I don’t want to be spoilery, but let’s just say it wasn’t something I wanted to do, or had planned on doing, but it is where the story went and I realized that it was how it had to go, even though I bawled my way through it. I have a few different scenes I love, but I can’t really say specifically what they are without spoiling things (again!)…I will say the final scenes in ENDURE are my absolute favorite. I feel like they are powerful and hold a lot of deeper meaning for those who seek it and it was just so wonderful to finally write the finale to Alexa’s story.

I think anyone who likes YA fantasy will enjoy my books. Readers of the THRONE OF GLASS series, the GRISHA (SHADOW AND BONE) series, GRACELING series, HIS FAIR ASSASSSIN series (GRAVE MERCY), THE GIRL OF FIRE AND THORNS series, and many more would probably enjoy my series, or vice versa. There is a new YA fantasy series by Kathryn Purdie called BURNING GLASS (March 2016) that is fantastic and I know readers who enjoy my books, or any of these others, will also love it! The overlapping elements of these books that will appeal to readers are strong heroines (with all sorts of different personalities) and the excitement that magic brings to the worlds these authors have created. Hopefully those same things are part of what they love about the DEFY series!

What do you hope readers will take away from ENDURE?

I wrote the first book DEFY after losing someone in our family at a young age to cancer, and after a few other very difficult trials in my life. A big theme in this series is to hold on to hope and find courage in the face of grief, death, pain, and seemingly insurmountable odds. That is taken to a whole new level in ENDURE, when everything I’ve been building toward finally comes together in an epic conclusion that I hope my readers will not only love, but also understand on a deeper level. I hope my readers will take away: a renewed determination to face the losses and struggles in their own lives with hope and courage, while remembering those who have gone ahead of us. The dedication of this book really encapsulates what I hope it will mean to my readers, and will make sense when they’ve read it all the way to the end. 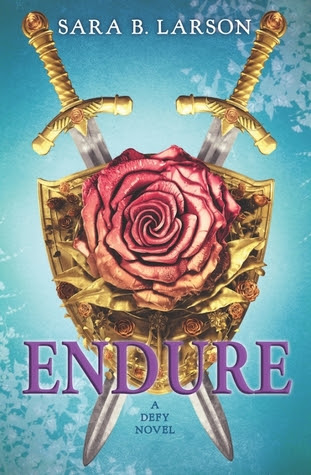 Acclaimed author Sara B. Larson has woven a stunning, romantic, and evocative finale to the Defy trilogy, that is sure to leave readers breathless until the very last page.
Purchase Endure at Amazon
Purchase Endure at IndieBound
View Endure on Goodreads

Sara B. Larson is the author of the acclaimed YA fantasy DEFY, and the sequels IGNITE and ENDURE. She can’t remember a time when she didn’t write books—although she now uses a computer instead of a Little Mermaid notebook. Sara lives in Utah with her husband and their three children. She writes in brief snippets throughout the day (while mourning the demise of naptime) and the quiet hours when most people are sleeping. Her husband claims she should have a degree in “the art of multitasking.” When she’s not mothering or writing, you can often find her at the gym repenting for her sugar addiction.

Have you had a chance to read ENDURE yet? Have you read the other books in the Defy series? Do you follow your story even when it takes a turn you weren't planning?