Kali Wallace, author of SHALLOW GRAVES, on poking at things with every writerly stick you have

We're excited to have Kali Wallace with us to share more about her debut novel SHALLOW GRAVES. 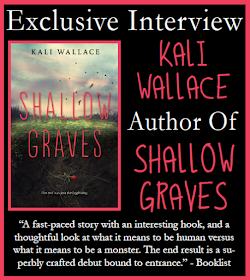 Kali, what scene was really hard for you to write and why, and is that the one of which you are most proud? Or is there another scene you particularly love?

I don't want to spoil the specifics, but there is an extended sequence toward the end of the book that's the build-up to and final confrontation with the main monster at the center of the story. All along as I was writing, through many different versions and drafts, I always knew at the back of my mind that this sequence of scenes (it's a few chapters long in total) had to be really powerful. You can't spend an entire novel building up to a confrontation and have it fall flat.

But that's exactly what it did the first 3454354 times I tried to write it. It wasn't as scary as it needed to be. It felt too small, too fast. The build-up was great, because that kind of dread-inducing, tension-increasing build-up is 99% atmosphere, and atmosphere is one aspect of writing that comes easily to me. (The only aspect. Hey, we all get one freebie.) But the confrontation itself--it was awful. I rewrote it, and it was still awful. Rewrote it again. Still awful. I couldn't get the dialogue right. I couldn’t picture the physicality of the characters, how they were moving relative to each other in a very particular kind of space. I couldn't figure out which details were important.

But I kept trying. I kept rewriting it. When my editors came back on the first edit letter and said exactly what I was expecting--that scene needed to be better--I did it again. There was no trick. There was no moment of realization, no flash of inspiration. It was just a whole lot of brute force trial and error, but I think it worked in the end. I am damn proud of that scene now, and I am proud of myself for poking it with every writerly stick I had at my disposal until it came out as scary and unsettling and weird as I had always imagined it could be.


How long did you work on SHALLOW GRAVES?

Because I am that person who keeps every draft of everything, I can in fact answer this question with an alarming degree of accuracy. Probably way more than anybody wants or needs.

Here we go: My very first attempt at a first draft is from November 2011. Back then it existed under the working title of corpsegirl.doc, and the first scene takes place at a farmer's market. Don't ask. It was a terrible idea. I scrapped it and tried again, and again, and again.

The first finished draft was completed on October 2, 2012 (I noted it in the file), and it was 128,000 words long. (Somewhere in New York, my editors and my agent simultaneously gasped in horror, followed quickly by the baffling, relieved sensation of having dodged a bullet, and they don't even know why.)

Writing any book is a process of constantly having lessons about yourself and your writing shoved in your face, whether you want them or not, but I think the number one thing I learned from writing SHALLOW GRAVES is that it's okay if I don't know every single thing there is to know about my main character on the first try, or even the second, or the third. I learned that I'll get there eventually, but it takes a while for me to get to know a character, to really know her, and that's okay. It might not be the way other writers go about it, it might not be efficient or fast or logical, but it works out in its own way, eventually.

And in learning that about my writing, what I've learned about myself is that I can, in fact, be okay with a jump-first-and-build-the-jetpack-on-the-way-down approach to a huge creative endeavor like writing a novel. I had always kind of thought I had to be the person with an exit plan and a spare parachute before, but not anymore.

SHALLOW GRAVES is the third novel I wrote to completion--let us not count the unfinished attempts in my past, whose numbers are as vast as the stars in the sky--and it's the second one I tried to sell. The first one, the one that got me my agent, got a lot of feedback from editors, and a lot of interest along the lines of "this one isn't quite right, but send us whatever else she writes."

And, hey, what do you know? It turns out when editors are saying that, they actually mean it. So listen to them! Don't discount rejections out of hand--pay attention to what they're saying. (That's my free advice for the day.) My agent helped me fix up SHALLOW GRAVES and got it into the hands of a few of those encouraging editors, and that was that. Even though I had all those rejections and all that time with the first unsold book (nearly a year, I think; I've blocked most of it out), I still feel like I've had it rather easy. So easy I'm still kind of waiting for the curtain to pull back and somebody to jump out and tell me it's all an elaborate practical joke.

The second novel I wrote has never seen the light of day outside the email inboxes of a few friends. I don't know if it ever will. It's pretty awful, but I love the characters, so maybe I'll rewrite it so those characters can have their proper home someday. I don't feel like it's wasted effort, but it's certainly not something I want to inflict upon the world in its current state.

Right now I am in the middle of revising my second novel for Katherine Tegen Books, which is a YA ghost story/mystery about a haunted apple orchard. It's called THE FUNERAL TREES. It's a incredible amount of work and I feel like I'm mostly wandering around blindfolded in a forest every time I sit down to write, but I love it and I want it to be great, so the work goes on. And on and on and on. 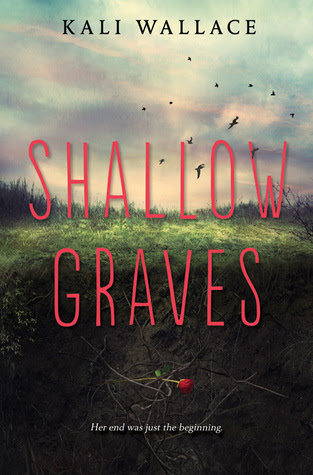 For fans of Holly Black and Nova Ren Suma, a gripping, hauntingly atmospheric novel about murder, revenge, and a world where monsters—human and otherwise—lurk at the fringes.

When seventeen-year-old Breezy Lin wakes up in a shallow grave one year after her death, she doesn’t remember who killed her or why. All she knows is that she’s somehow conscious—and not only that, she’s able to sense who around her is hiding a murderous past. In life, Breezy was always drawn to the elegance of the universe and the mystery of the stars. Now she must set out to find answers and discover what is to become of her in the gritty, dangerous world to which she now belongs—where killers hide in plain sight and a sinister cult is hunting for strange creatures like her. What she finds is at once empowering, redemptive, and dangerous.

Kali Wallace studied geology and geophysics before she decided she enjoyed inventing imaginary worlds as much as she liked researching the real one. Her short fiction has appeared in Clarkesworld, F&SF, Asimov's, Lightspeed Magazine, and Tor.com. Her first novel will be published by Katherine Tegen Books in 2016. She lives in southern California.

Have you had a chance to read SHALLOW GRAVES yet? Do you have to know everything about the novel you're writing or are you okay with jumping without a parachute? What do you do to fix a scene that isn't working? Share your thoughts about the interview in the comments!