Jennifer Longo, author of UP TO THIS POINTE, on writing the best version of your book

We're thrilled to have Jennifer Longo with us to chat about her latest novel UP TO THIS POINTE. 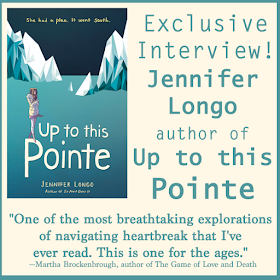 There is a scene where Harper admits to another person the most severe, kind of violent thing she has done to her body in her life-long attempt to secure her dream. And in this moment she understands it made no difference, that is was for nothing. Then the person she’s giving this information to responds, essentially, “Okay. Well, so what now?” It’s confusing and heartbreaking for Harper, both the admission and the reaction, and she can’t pretend anymore. It was so hard to write – I love that moment.

What do you hope readers will take away from UP TO THIS POINTE?

The Shackleton family motto: Fortitudine vincimus: By Endurance we conquer.

I will say first that the very best things in life are never easily achieved, but the work for them is wonderful. The work of writing books is a privilege, the work of seeking publication is a privilege to embark on, and I’m so fortunate to get to do both.

UP TO THIS POINTE is the first of a two-book contract with Random House. This contract was offered when my first novel, SIX FEET OVER IT, had just published. It took three years to write SIX FEET OVER IT and a year for a truly wonderful agent to pull it from the slush pile. Then it took a year and a half of spec revisions, near-misses and rejections, and my agent’s heroic refusal to give in until Random bought it. I wrote UTTP while all that was all going down, so when SFOI published and my editor asked if I had anything new, I gave her UP TO THIS POINTE and amazingly, she wanted it and offered the two-book deal. I couldn’t be more grateful.

I do have a ritual. To be productive I thrive on routine: I run for an hour every morning with my dogs at 7am, get my daughter off to school and do non-writing work (Dishes, laundry, email, Dr. appointments) At 10am until to 2pm I am in my writing cave. This is either my home office, the living room sofa, or the kitchen table. Enya is the only music I listen to when I write. iTunes says I’ve played Caribbean Blue 3,123 times. (Whatever, iTunes. Don’t judge me!) Once a week the cave happens in a cafe in Seattle with some wonderful writer friends, and I love those days so much. It gets lonely in the cave, and it’s so nice to be in one together that also has coffee and cupcakes. I pick my daughter up from school at 2:30, take her to ballet, and go to a coffee shop or the library to write for a couple more hours while she’s in class. This is a ton of daily dedicated writing cave-ness, but I’m not straight-up drafting the whole time, it is time for everything - research, outlining, revising, editing, and drafting. On weekends I’ll work if I’m on deadline, otherwise I insist on a weekday schedule so my family doesn’t hate me and also typing is hard on a person’s wrists and eyeballs. I use Visine Tears at a near Enya-consuption rate.

Never let a desire to be published supersede the goal of writing the best version of the book that’s in you. A writer writes. Publishing is it’s own unique endeavor you can worry about later; only one is a possible consequence of the other, and it’s clear the direction that scenario flows. The nuts and bolts of how to acquire an agent and sell to an editor are simple - not easy - but fairly pedestrian and consist mainly of a willingness to revise, patience, persistence, and access to an email account. See? Nothing to do with writing the book. Just write. Then write some more.


My editor has the first draft of my new novel, a contemporary YA about a young woman who is a wilderness back packer and mountain climber who inexplicably has never been able to summit. Also there’s a whole bunch of exciting discussions about adoption, the true nature of ethnicity, maybe a little violence, and my attempt at steamy romance. My poor editor. I’m excited to see what magic she pulls from her hat to turn that bird’s nest into a book. She’s kind of a genius that way.

A refreshingly original contemporary YA, unlike anything readers have seen before. Perfect for fans of Jandy Nelson, John Corey Whaley, and Libba Bray.

She had a plan. It went south.

Harper is a dancer. She and her best friend, Kate, have one goal: becoming professional ballerinas. And Harper won’t let anything—or anyone—get in the way of The Plan, not even the boy she and Kate are both drawn to.

Harper is a Scott. She’s related to Robert Falcon Scott, the explorer who died racing to the South Pole. So when Harper’s life takes an unexpected turn, she finagles (read: lies) her way to the icy dark of McMurdo Station . . . in Antarctica. Extreme, but somehow fitting—apparently she has always been in the dark, dancing on ice this whole time. And no one warned her. Not her family, not her best friend, not even the boy who has somehow found a way into her heart.

Jennifer Longo holds a Bachelor of Arts degree in Acting from San Francisco State University and a Master of Fine Arts degree in Writing For Theatre from Humboldt State University. She is a two-time Irene Ryan Best Actor Award recipient and a Kennedy Center American College Theatre Festival Best Full Length Script honoree for her play, FROZEN. After years of acting, playwriting, working as a literary assistant at San Francisco's Magic Theatre, then as an elementary school librarian, Jennifer told the occasional story at San Francisco's Porch Light Storytelling Series and decided at last to face her fear of prose and actually write some. Her debut novel, SIX FEET OVER IT (Random House Books) received starred reviews from Kirkus and The Bulletin, and was selected as a VOYA Perfect Ten and an Indies Introduce New Voices title. Jen's next novel, UP TO THIS POINTE (Random House Books) will publish January 19th, 2016. A California native and recent San Francisco transplant, Jennifer now lives with her husband and daughter on an island near Seattle, Washington and her every hour is consumed by writing, running marathons, taking her kid to ballet class eleven thousand times each week and reading every book she can get her hands on.

---
Have you had a chance to read UP TO THIS POINTE yet? Do you have a specific routine to keep you writing? Are you focusing on writing rather than publication? Share your thoughts about the interview in the comments!