Alexander Gordon Smith on Chucking Your Routine & Awakening Your Creativity

We wish to give an especially warm welcome today to our guest blogger, Alexander Gordon Smith. Not only did he bring some great writing advice to share, but HE ALSO BROUGHT HIS BABY! I know you'll join with me in congratulating Gordon on his beautiful new arrival not only because she's just so adorable (check out pic below), but because she also inspired this wonderful post you're about to read. If you've had kids....or any other schedule altering lifestyle change...then you'll greatly identify with what Gordon's about to share.

And, Gordon, we're so glad you brought Elspeth along...and that she didn't get punted!

Don't Punt the Baby: A Craft of Writing Post by Alexander Gordon Smith


Hi everyone! It's an absolute pleasure to be back here on Adventures in YA Publishing! I have been looking forward to writing a Craft Friday post for a while now, and I had planned exactly what I wanted to say. Then life flung a spanner in the works. Well, not so much a spanner as a 9lb 8oz baby with the sleeping patterns of a walrus (Google it!) and the lungs of a soprano. It's pretty awesome, but it means I'm sitting here with said baby splatted across my chest a day after the deadline for my post trying to plumb the depths of my sleep deprived (depraved?!) mind for whatever it is I'd wanted to talk to you about.


And it's bloody hard trying to write on an iPad while holding it over your head...

I'm a fairly regimented writer. Not in terms of a plan or anything, I don't plan my novels at all, actually, but in terms of actually forcing myself to sit down and write every day. I make myself do it, because I know what my willpower is like, and I know that nobody else will make me do it. I tend to write in the mornings. I wake up, sort the kids, grab a coffee (instant... I know, I'm a monster), then head to the office (or back to bed) and write till about lunchtime. This is the only way I can get stuff done, it's the routine that works for me. It's how I've written every single one of my novels to date.

Most of the writers I speak to have a similar mindset. They've found their optimum writing routine. It's often necessary, a way to ensure that somewhere in the mad whirlwind of day to day life you find time to actually write. In forming a pocket of protective time we allow ourself the space we need to breathe, to let the ideas flow.

I'm fairly militant in the way I write books too. I know what works for me. Like I said, I never plan, but I do immerse myself in the story for weeks before I start to write - the characters (obviously!) and the world, the sights, the smells, the language, everything. Then, when it feels like the story has gestated enough, I start to write, and I write FAST. Anything from 2,000 to 11,000 words a day. And always in order, every chapter from start to finish, first chapter through to last. I write it like I'd watch a movie, a furious first draft with no editing and no revision. I'm just hungry to see what happens, to find out where the story leads me.

Man, this iPad is getting really heavy...

So, where am I going with this? Posts on planning and routines aren't exactly new, and aren't always useful. Well, to be honest I'm not entirely sure yet, but I've had eight hours of sleep in seven days so bear with me! I was always worried that a baby might interfere with my writing routine, and therefore my writing too. I was terrified that if I couldn't keep to my tried and tested schedule then I would lose the ability to write anything at all. So I was always determined to maintain that schedule no matter what. I mean, how hard can it be to ignore a screaming baby, right?

Of course Elspeth had other plans, and threw a cluster bomb right into the middle of my routine. Panic set in, old anxieties about not being able to write crept into the marrow of my imagination. If I can't follow my old routine, I thought, then something is going to fundamentally change.

It never occurred to me that this might be a good thing. Not until one night, burping Elsie at 3am while literally pressing my head against the corner of a bookcase in order to lever my eyelids open. I was in that weird hypnagogic stage, those bizarre flashes of life and story that last a fraction of a second but which seem to contain lifetimes (and whose accompanying twitching of limbs is not recommended whilst holding a baby). I needed something drastic to keep me awake, and watching movies and reading just wasn't cutting it.

I though about writing, but something stopped me. I knew I was a morning writer, that was what my routine dictated. It was so ingrained in me that the thought of writing at any other time of day seemed bizarre, pointless, utterly impossible. I felt like if I tried to write so late at night I wouldn't be able to write the way I was supposed to write. Something would have changed, it wouldn't be as good.

Then I suffered a particularly vivid dream that the baby was a football and decided that maybe I should give writing a go if only to keep me awake, and the baby unpunted.

So I plonked Elsie on my tummy, grabbed a notebook, and started to write. It was a new project, something I'd seen in one of those hypnagogic trances - a teenage girl who is actually hundreds of years old, staring down at a frozen planet as a liquid bead of sunlight rolls over its horizon. That's all there was, all I had to go on. And normally I would have left it there, mulled it over for a few weeks, then started to eek out a story and write that story from the first page to the last.

But that was my morning routine, and this wasn't the morning. So I began a chapter that I thought might happen in the middle, one that I loved the thought of. It wasn't even a chapter, it was just a scene - and writing a scene that isn't locked inside that mini beginning-middle-end of a chapter is unheard of for me. It was a girl, watching a ghost as it danced through the empty halls of a space ship. There was no action (action is a morning routine thing), no horror (morning), no bloodshed (always before coffee). There wasn't much at all, just this simple, beautiful thing that had no business being anywhere.

Then I wrote another. Unconnected to the first in almost every way. And another. I didn't even finish them, I just wove from one to the next, characters hopscotching between scenes, playing hide and seek in them. And something really weird was happening, something amazing. Instead of me relentlessly piledriving a story forwards, I was watching it grow by itself, stretching out feelers, finding its way. Because I was writing at a different time, I felt like I was writing with a different part of my mind, and a different part of my soul. It was liberating, and it was beautiful.

I just dropped the iPad on the baby but I think she's okay...

It hasn't been long since that night, but I've been trying to do as much night writing as possible. It feels so different, so fresh. It's hard work, because I am more of a morning person, but maybe that's what makes it so rewarding. It's less about having that edge, that furious drive to get to the finish, and more about enjoying each scene for what it is. It's less like watching a movie, more like enjoying a dream - those really awesome dreams you have when you're dosing in your bed on your day off, drifting in and out of warm, fluffy, wonderful sleep oh man I miss sleep I really want to go to sleep. Sleep. Sleeeeeep.

Having a baby means all your routines go out the window, and that's what I was most terrified of. I know other writers who fear it too. But it can be a good thing, because when we limit the hours and conditions of our creativity then maybe we limit the power of our imaginations too. If little Elsie has taught me anything it's that I can write as well under moonlight as I can at dawn. Maybe I can even write better.

So that's my advice for this post. If you're the kind of writer who sticks religiously to your routine, who tries to do the same thing every day, and with every book, then ask yourself if that schedule is actually helping you or hindering you. Try breaking free, and you never know what you might find.

Thanks again!! My eyes are bleeding now, but it was awesome talking to you. 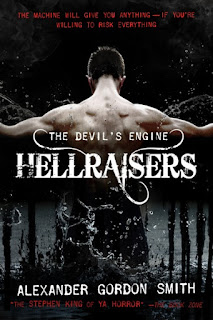 Alexander Gordon Smith is the author of the bestselling Escape From Furnace series, The Fury, and the brand new Devil's Engine books, starting with Hellraisers. He lives in the UK with his girlfriend and his three daughters – one of whom is one week old!