Ingrid Sundberg, author of ALL WE LEFT BEHIND, on remembering that writing is fun

We're thrilled to have Ingrid Sundberg join us to share more about her debut novel ALL WE LEFT BEHIND. 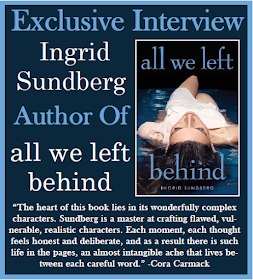 Ingrid, what was your inspiration for writing ALL WE LEFT BEHIND?

I fell in love with this character - Marion - who experiences the world in such a sensual and vivid way. She doesn’t know how to articulate what she wants, and at the same time she feels her desires and fears so intensely. She haunted me, and I couldn’t stop writing about her. She had a secret to tell.

How long did you work on ALL WE LEFT BEHIND?

Ten years / two and a half years. The character of Marion has been with me for a long time. She was at the center of a screenplay I wrote in college and then rewrote as a novel. Eventually I threw both of those stories away, and started fresh. Marion has haunted me for years. She had a story to tell, but it took me a long time to gain the writing chops to do her story justice. She feels the world sensually, and the things that scare her are not easy to articulate. It’s been a long journey in learning how to give her silence words.

It taught me how to hear my inner critic. ALL WE LEFT BEHIND deals with sex, abuse, and drug addiction. All of these are topics I felt uncomfortable writing about. I mean, my mom is going to read this book! I learned that every scene I didn’t want to write, was a scene I needed to write. My instinct was to protect myself and my characters. I had to force myself to go against my instincts and write the honest truth, not the glossed over “safe version” of the truth.

What do you hope readers will take away from ALL WE LEFT BEHIND?

I hate the idea of telling readers what they should “take away” from a novel. I don’t want to invalidate anyone's experience. Reading a novel is intimate and personal, and every reader’s relationship with these characters is going to be different and special.

For me … I wrote this book because I wanted to explore the awkwardness and vulnerability of a real high school relationship, one where the characters have to face the true meaning of intimacy. Romantic relationships tread a complex space that is often unspoken and hard to articulate. I think what each reader “takes away” from that unspoken space can only be articulated by each reader individually. Which is awesome. I guess I hope each reader looks into that unspoken space and ask themselves for meaning.

It’s been a long journey. I’ve been writing for over 13 years, and I have two MFA’s in writing. One MFA is in screenwriting and the other in novel writing. I have many unpublished / unproduced full length screenplays, TV scripts, short stories, novels, graphic novels, and picture books under my belt. I’ve done a lot of experimentation, and it’s taken a long time to find my voice and learn how to write. But I needed all of that to gain the chops to write ALL WE LEFT BEHIND. And there’s always more to learn.

There’s no single “ah ha” moment that’s the key to writing. It’s a series of a small “ah ha” moments that keep pushing your work to the next level. But I would say one of my biggest take-aways was at Vermont College when my adviser said: “There are plenty of MFA reasons why a certain technique is supposed to work, but if it doesn’t work, it doesn’t work. Stop forcing it.” Basically she blew all the rules out of the water and taught me to listen to my characters. I had to forget all the MFA writerly mumbo jumbo and let my story tell me what it needed.

Remember that writing is fun. If you’re not having fun, then you’re doing something wrong. I’m always astounded by how many writers seem to hate writing. That doesn’t make any sense to me. The magic happens in the fun … and that doesn’t mean you have to write a “happy book.” ALL WE LEFT BEHIND deals with very heavy topics, but I loved writing every word of it. When you write, you enter a world of make believe, a world of metaphor and language and magic - don’t forget to have a blast!

What I’m working on now is a big delicious mess! It’s a re-telling of Peter Pan … maybe. It might turn into something else. But there’s this glorious graffiti-culture art world, and some pirates, and some fairies, and a hot boy … because I like to write books where my characters make out. :)

For fans of Simone Elkeles and Courtney Summers, this haunting debut novel is about two teenagers battling their inner demons as they fall in love for the first time.

When Marion Taylor, the shy bookworm, meets sexy soccer captain Kurt Medford at a party, what seems like a sure thing quickly turns into a total mess. One moment they’re alone in the middle of a lake, igniting sparks of electricity. The next, they’re on dry land, pretending they’ve never met. But rather than the end, that night is the beginning of something real, terrifying, and completely unforgettable for them both.

As Marion and Kurt struggle to build a relationship from the fractured pieces of their pasts, every kiss they share uncovers memories both would rather keep buried. Marion desperately wants to trust Kurt and share the one secret she’s never told anyone—but some truths aren’t meant to be spoken out loud. Kurt is also still haunted by his mother’s death, by the people he hurt, and by the mistakes he can never take back.

Explosive together and hollow apart, Marion and Kurt seem totally wrong for each other—but could they turn out to be more right than they ever thought possible? 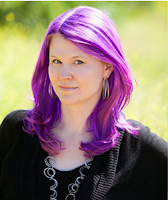 I grew up on the small island of Mount Desert off the coast of Maine. I’ve since moved to sunny Southern California, but my heart still yearns for the delicious colors of autumn. I love polka dots, baking, and dying my hair every color of the rainbow. I hold an MFA in writing for children from Vermont College of Fine Arts and an MFA in screenwriting from Chapman University. I also have a BFA in Illustration from the Massachusetts College of Art. I’ve been a freelance story editor, illustrator, and graphic designer for many years. In addition, I’ve taught college classes, worked on film sets, and been a children’s bookseller. All We Left Behind is my first novel.

Have you had a chance to read ALL WE LEFT BEHIND yet? Do you listen to your characters while writing? Do you have fun while writing?