You are all in for a real treat today. Elizabeth Hall Magill is here to share a very thoughtful post on how to craft a story with a genuine feminist perspective, which for Elizabeth means getting into the very heart of a character, unvarnished by societal assumptions. I especially loved her point on the rich space between the narrator and character -- the bold there is mine. Welcome Elizabeth!

How to Craft a Story with a Feminist Perspective: A Craft of Writing Post by Elizabeth Hall Magill

A couple of years ago, I had the good fortune to meet Sherman Alexie, author of The Absolutely True Diary of a Part-Time Indian, when he won Longwood University’s John Dos Passos prize. Mr. Alexie offered to read the first chapter of my novel, which I was about to revise. I knew my revision would be a feminist one—it would include an awareness of class, race, and gender privilege that reflected my recent work—but I wasn’t sure what shape it would take. Mr. Alexie gave me the perfect place to begin, a line on the sixth page of my manuscript: Seth didn’t hate his father’s money—he just hated his father.

I would never have thought to begin with that line. But when I considered it, I realized the line framed the story perfectly—the novel is about a group of UVA students struggling with loss, grief, and growth. A story that unravels from a fulcrum of white, upper-middle-class privilege. To begin with a line that acknowledges that privilege meant I was off and running with my feminist revision.

But why a feminist revision? And what does that mean, in a practical sense?

In the four years since I’d written the novel, I’d gone from believing the word feminist was tainted with disdain for men and condemnation for women to understanding that it held freedom. Feminist writing taught me why motherhood was harder than it had to be and why I never felt pretty enough. It exposed my own assumptions to me—assumptions I made because I was white and middle-class and hadn’t had to think beyond front-page headlines. It allowed me to find sisters I thought I’d never have and release cultural baggage that weighed me down.

I needed to bring this awakening to my fiction—I needed more characters in my book, from more backgrounds. I needed to cut through the assumptions I’d made unconsciously. I needed my protagonist—a young woman named for a goddess—to fully understand the meaning of self-ownership, and claim it. I needed to help my readers see what I’d seen.

But how to do all that and remain true to good storytelling? No one likes to read a book that feels like a treatise. And many people have unexamined assumptions as a result of living in a patriarchy, just like I did. Exposing these assumptions can be a real-turn off, and painful to boot. Sure, literature is supposed to make us face pain, as well as entertain us and make us think. But how to do that in a story, and let the story lead?

The key is tucked into the space between narrator and character.

In nonfiction, the words are always and only mine. But in fiction, the words sometimes come from the mouths of people who are nothing like me—people who are, and must be, completely separate from me. Regardless of the story’s point of view, the writer is shaping it, making choices about what, where, when, how, and why.

In this space between narrator and character, the writer can show the reader characters and events from a perspective that the characters don’t have. This is the perfect place to play with ways to bring a feminist consciousness to the story. And I’ve found a few strategies that work well:

A patriarchy is full of assumptions about people—poor people are lazy, no one group of people is more privileged than another, and all women experience sexism in the same way, to name a few. These assumptions are a form of bias, shaping our perceptions of each other on an unconscious level.

By allowing characters to be fully themselves within the context of their daily lives—a bisexual woman after a breakup, a black teenage boy out for a walk—you can expose the harmful assumptions of patriarchy. The feminist term for living daily life while dealing with whatever patriarchy sends your way is lived experience. And fiction is great at depicting lived experience.

You can also allow a character to demonstrate an assumption and then counter it directly, either through the character’s growth or through other characters. Alexie does this at several points in The Absolutely True Diary of a Part-Time Indian—Junior is constantly realizing what assumptions he’s made about the white kids at his new school, and exposing the ones they’ve made about him.

Stereotypes are an insidious form of bias, and they’re prevalent in our media. Stereotypes reinforce the assumptions of patriarchy—the dumb blonde, the asexual Asian man and the compliant Asian woman, the hypersexual angry black woman and the stoic black housekeeper—our culture has a ton of them, and they all negatively impact the people they claim to portray. So play against them—create characters that don’t fit into their stereotypical boxes.

The writers for the movie Big Hero 6 have this one down-pat: each of the main characters plays against stereotype while poking fun at it. You can play against stereotype in subtle ways, and with minor characters, as well: in my revision, I needed a surgeon, and she became a black woman rather than the usual older white man. Another character has shown up, a male theater major—maybe he’ll be straight, or bi. Maybe someone will think he’s gay, and he’ll have fun with the assumption.

This is just another way of saying show, don’t tell. Your readers don’t want a feminist lecture—they want a story with a heartbeat. So give them one. One of my favorite ways to teach feminist consciousness is by showing female desire.

The sexual perspective—in movies, in advertisements, in books, in short stories, in poems—is overwhelmingly heterosexual and male. So mix it up—make a woman’s heart beat fast as she is near someone she’s attracted to. Describe the gut-wrenching lust, the biceps or breasts, the gorgeous eyes, the sunlight on hair. Let desire be human, and centered in the female.

I’ve done this in my own work, describing my protagonist’s reaction when she meets her future boyfriend. And I love the way Martina Boone portrays female desire in Compulsion—our experience of Eight is firmly rooted in Barrie’s physical reactions. When we see feminist principles—the female gaze, and female self-love and self-ownership—in action, they become normalized.

This is the beauty of feminist fiction: it exposes us to ourselves while telling us a story we can’t put down. It gives us—all of us—back to ourselves. And it does so not by lecturing, but by using the space between narrator and character—a space that, like everything about storytelling, is part logic and part magic. 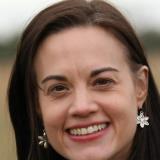 Elizabeth Hall Magill has been blogging about feminist issues at Yo Mama since 2011–posts have been featured on BlogHer (Spotlight BlogHer) and Miss Representation’s Sexy or Sexism campaign. Her essay "Jesus and Sophia" appears in the anthology Whatever Works, edited by Trista Hendren and Pat Daly, and her work has appeared in Role Reboot and on the news site .Mic.

In addition to revising her novel and writing short fiction, Elizabeth is currently researching and writing a nonfiction book entitled American Sexism: Questions and Answers. You can find her blog on Facebook or follow her on Twitter: @LizHallMagill.