Daniel Kraus, author of THE DEATH AND LIFE OF ZEBULON FINCH, on removing the last sentence

THE DEATH AND LIFE OF ZEBULON FINCH, VOLUME ONE: AT THE EDGE OF EMPIRE is not only a mouthful, it's also the latest novel from Daniel Kraus, who we're excited to have with us. 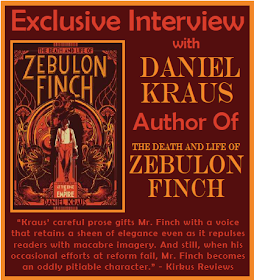 Daniel, what scene was really hard for you to write and why, and is that the one of which you are most proud? Or is there another scene you particularly love?

Well, there's a scene near the end of Volume One that everyone is going to assume was the most painful to write, but they'll be wrong. The difficult scenes to write are not necessarily the "difficult" scenes, they're the ones that I've been thinking about for the past twenty years. When you think about a scene that long and suddenly one morning there you are, about to write it, it can be nerve-wracking. How do you know you're really up to it? Will it be all you've hoped? It's a lot of self-created pressure.

I'm one of the lucky ones. My first book sold relatively quickly and I haven't had any periods where I was without a publisher (yet). That said, I have written one novel that I've chosen not to publish. My readers like the darkness of my content, but with the unpublished book, I wonder if I went too far. I need some time to think about it -- another decade, maybe. But my guess is that it won't come out until after I'm dead, and then everyone can wonder "What was wrong with that guy?"

I don't hold a lot of stock in "believe in yourself!" advice -- it feels empty. The piece of advice I've settled on is concrete and specific. Look at the last sentence of one of your chapters. You probably put it there because it has a zinger, or a punch, or something to compel the turning of the page. But imagine if you got rid of it. To me, I'm constantly surprised by how much stronger and less gimmicky closing paragraphs become after I've removed that sentence.

The Death and Life of Zebulon Finch, Volume One: At the Edge of Empire by Daniel Kraus
Hardcover
Simon & Schuster Books for Young Readers
Released 10/27/2015

May 7, 1896. Dusk. A swaggering seventeen-year-old gangster named Zebulon Finch is gunned down on the shores of Lake Michigan. But after mere minutes in the void, he is mysteriously resurrected. His second life will be nothing like his first.

Zebulon's new existence begins as a sideshow attraction in a traveling medicine show. From there, he will be poked and prodded by a scientist obsessed with mastering the secrets of death. He will fight in the trenches of World War I. He will run from his nightmares—and from poverty—in Depression-era New York City. And he will become the companion of the most beautiful woman in Hollywood.

Love, hate, hope, and horror—Zebulon finds them. But will he ever find redemption?

Ambitious and heartbreaking, The Death & Life of Zebulon Finch, Volume 1: At the Edge of Empire is the epic saga of what it means to be human in a world so often lacking in humanity.

Have you had a chance to read THE DEATH AND LIFE OF ZEBULON FINCH, VOLUME ONE: AT THE EDGE OF EMPIRE yet? Do you ever write stuff so dark you're not sure you want people to read it? Have you tried removing the last sentence from each chapter to see if it's stronger?