Alexander Yates, author of THE WINTER PLACE, on getting to know characters through their grief

We're delighted to have Alexander Yates join us to share more about his latest novel THE WINTER PLACE. 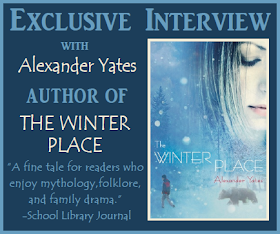 Alexander, what scene was really hard for you to write and why, and is that the one of which you are most proud? Or is there another scene you particularly love?

At the opening of The Winter Place, my two young characters are orphaned (not a spoiler—it happens early), and I found that the chapters immediately following that traumatic event were very difficult to write. Part of me was tempted to skip ahead by a month or two, to a point when some of the shock might have worn off for them. But it was important to me as a writer (and to the plot) that I stick with the characters in that moment. Grief is such an intense and personal experience, and I thought that if I didn’t get to know who my characters were at the depths of their grief, then I’d never understand them at all.

And it wasn’t just the grief—capturing their shock, too, was a real challenge. Sometimes people can become dissociated in the moments immediately following a tragedy. I wanted to capture that feeling of dislocation, without making these kids look like sociopaths who didn’t care that their father had just died.

How long did you work on THE WINTER PLACE?

The initial images and ideas came a full 14 years ago, when I first traveled to Finland to spend the summer with my girlfriend (now my wife). But I didn’t start writing The Winter Place until 2011, after which the novel took about three years to find its final shape.

I feel like books absolutely do teach you lessons about yourself, but often those lessons are temporary. They apply to the person you are when you’re writing that book. But by the time you get to the next book, those lessons probably won’t be applicable.

With that disclaimer out of the way, I can say that The Winter Place taught me to stop trying to force everything. For the longest time I agonized over trying to make the novel into this super clever, cheeky, referential look at children’s fantasy novels and tropes. The book finally began to work when I said to myself: OK, maybe cut it out with all this smarty-pants ironic garbage. Instead of trying to write a “take” on a fantasy novel, how about you just write the very best fantasy novel that you can?

I’ve written four books total—two that have been published (The Winter Place is my second) and two that never have been. I think of these as “practice books.” I wrote them when I was much younger, and they will never ever see the light of day (though I do still have a personalized rejection letter from when I tried sending the first one off, 19 years ago). But even though no human will ever again read either of these books, they were tremendously useful to me as a writer. Setting out to write a novel is such a massive, intimidating task. Those early projects gave me a lot of confidence, because they taught me that it was doable!

As it happens, The Winter Place had an interesting path to publication. My adult publisher rejected the book, saying that it seemed like YA to them. It went on to get about 17 further rejections. Then my agent and I decided to take the hint, and try sending it out to YA publishers. It found a home very quickly after that.

There is a moment in chapter two when a magical wheelchair just appears in one of my character’s bedrooms. I had not planned for that to happen. Literally, one sentence before I wrote it, I didn’t know it was coming. But then for some reason, I just wrote: “The wheelchair was back.”

It changed the entire novel.

I’m working on a second young adult book, set in a small town on the coast of Maine. I’m superstitious about giving out details (they always change!) but I can say this much: There is no magic in this one. But there are bugs. Tons of bugs.

There is a middle world between life and death, and Tess must navigate it to save her brother in this heart-wrenching story infused with the fractured and fantastical realms of Finnish mysticism.

Axel and Tess are bewildered when a stranger shows up in their backyard accompanied by a giant brown bear, but before they can investigate the bizarre encounter, something more harrowing happens: their father is killed in a freak car accident.
Now orphaned, Tess and Axel are shipped off to Finland to live with grandparents who they’ve never met, and are stunned to discover that the mysterious stranger with the bear has found them again. More stunning—they come to understand that this man isn’t really a man…he’s a keeper of souls. And the bear isn’t really a bear…it’s a ghost. Their mother’s ghost. Wandering, endlessly, searching for their father.

Then the Keeper invites Axel, who is fighting his symptoms of muscular dystrophy, to join the path of the dead—and when Axel disappears into the deep snow, Tess knows she must find a way to follow. There are mysteries connected to this peculiar man, this keeper, and if she can untangle them, she might not only save Axel, but also bring her parents peace.

Alexander Yates grew up in Haiti, Mexico and Bolivia. He graduated high school in the Philippines, where he later returned to work as a contractor in the US Embassy. He holds an MFA from Syracuse University, where he edited the literary journal Salt Hill and won Joyce Carol Oates awards in fiction and poetry. His fiction and reviews have appeared in Salon, American Fiction, Fivechapters.com and the Kenyon Review Online. He currently lives in Hanoi, Vietnam, with his wife and cats.

Have you had a chance to read THE WINTER PLACE yet? How many practice books do you have? Have you ever written a sentence you had no idea was coming that changed your entire novel?