Write What You Know by Todd Strasser

Today we're thrilled to welcome Todd Strasser to the blog. Todd Strasser is the author of more than 130 novels for children and young adults, and his latest offering The Beast of Cretacea hit shelves last week. Todd is revisiting the concept of writing what you know, offering some new gems of advice.


Write What You Know, Revisited by Todd Strasser 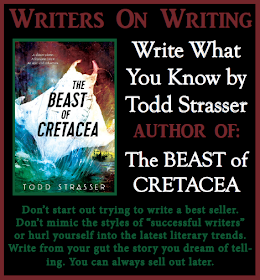 My first novel (written in the early 1970s) was a roman à clef about a teenager who falls in love with a “nice” young woman from another town, then gets arrested for selling drugs, and tries to hide it from her. Not aware at the time that a new genre of literature called Young Adult was in its infancy, I was worried that my story lacked the adult appeal necessary to catapult it onto the best seller lists.

Seeking to correct this deficiency, I purchased a copy of Writer’s Digest for advice on how to turn my book into something with sales that would rival those of Stephen King’s, and as a result learned that at that particular moment on the literary timeline, the two ingredients every book needed to insure vast commercial success were Nazism and cocaine.

I immediately got busy creating a new character, a Nazi, who had escaped from Germany in a submarine at the end of World War II and sailed it to Colombia, South America, from where he regularly smuggled cocaine, in his submarine, all the way to the north shore of Long Island, New York. To tie this into my story, I made this Nazi the uncle of my protagonist’s best friend.

Thanks to an extraordinary stroke of luck – The New Yorker Magazine picked a story of mine from the slush pile and published it -- I was able to secure the services of an agent who began to submit the novel manuscript to publishers. After nearly a year and a dozen dismaying rejections, an editor named Ferdinand Monjo from a publisher called Coward, McCann & Geoghegan notified my agent that he wished to have lunch with me.

I met Mr. Monjo in the restaurant of a small, elegant East Side hotel. He was a refined man dressed in a sport jacket and tie. His wavy silver gray hair combed back, his wire-rim glasses sparkling, he smoked cigarettes in a long gold cigarette holder. After graciously thanking me for coming to lunch (shouldn’t it have been the other way around?), Mr. Monjo gestured for me to join him at a table set with linens, crystal, and silver. The conversation that followed had nothing to do with my book, and everything to do with who I was, where I’d come from, and what my literary goals were. In the meantime the editor consumed three vodka gimlets and a red caviar omelet (I’d never seen one before, and have not seen one since).

Finally, over coffee and dessert, Mr. Monjo got down to business. Would I possibly consider rewriting my book? He asked so apologetically that you would have thought he’d forgotten his wallet and needed me to pay for lunch. Due to all those daunting rejections, I was eager for advice, and said I would be glad to rewrite it. Did Mr. Monjo have any suggestions as to how it could be improved?

Indeed he did. “It is obvious that you know a great deal about being a teenager in the suburbs, Todd.” He paused to clear his throat and take a sip of coffee. “However, I hope you will not be offended if I add that it is equally obvious that you know very little about Nazi submarines and cocaine smuggling.” After waiting a moment for this to settle in, he added, “The important thing, is to write about what you know. Forget the Nazi, focus on the teenagers, and make it a story about them.”

In the months that followed, I took his advice and revised the book, Angel Dust Blues, removing the Nazi and his submarine, making the story tighter and more character-driven. The resulting novel went on to receive stellar reviews and paved the way for my career as a YA writer. (Sadly, Mr. Monjo passed away just before publication and never got to see the result of his sage guidance).

These days I think authors need to expand a bit on that old adage, “write what you know.” Fiction writers today need to be experts. Therefore I would advise anyone who wishes to try this line of work to align themselves with one of the following categories:


And one final tip. Don’t start out trying to write a best seller. Don’t mimic the styles of “successful writers,” or hurl yourself into the latest literary trends. Write from your gut the story you dream of telling. You can always sell out later. 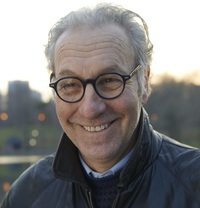 Todd divides his time between writing books and speaking at schools and conferences. When he's at home, he likes to spend time with his children and dog, Mac. He still likes to fish, play tennis and ski, but his favorite new sport is surfing.