Sherry Thomas, author of THE IMMORTAL HEIGHTS, on stepping away when no ideas are forthcoming

THE IMMORTAL HEIGHTS is the final book in the Elemental Trilogy, and we're delighted to have Sherry Thomas join us to talk about it. 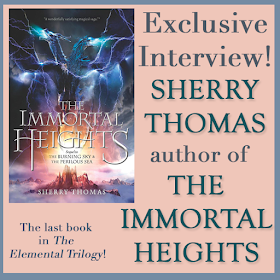 Sherry, how long did you work on THE IMMORTAL HEIGHTS?

THE IMMORTAL HEIGHTS took a good year to write. Not that I was constantly working on it. In fact, I produced two halves of two other books during that time. But even when I wasn’t actively writing it, it was never not on my mind and ideas were constantly percolating through my head.

I was incredible stuck on the beginning of the book. I knew how it would end—sort of, what I had was big-picture knowledge and not necessarily specifics—but I had no idea how to get from the opening pages, in the middle of a battle, to that conclusion I wanted.

I wrote the epilogue fairly early on, but that didn’t help too much, even though it did serve as a shiny beacon, an end to aspire to. And then I just had to grind out the rest, one paragraph at a time.

What the writing of this book confirmed for me was that I as the author don’t have to enjoy the process to produce a result that I’m happy with. Also, that I was right to trust my instincts, to step away when no ideas were forthcoming, and give my subconscious the time necessary to arrive at the correct next step.

What do you hope readers will take away from THE IMMORTAL HEIGHTS?

I just hope they have one heck of a good time reading the book—and that the characters stay with them after they’re done.

In a pursuit that has spanned continents, Iolanthe, Titus, and their friends have always managed to remain one step ahead of the forces of Atlantis. But now the Bane, the monstrous tyrant who bestrides the entire mage world, has issued his ultimatum: Titus must hand over Iolanthe, or watch as his entire realm is destroyed in a deadly rampage. Running out of time and options, Iolanthe and Titus must act decisively to deliver a final blow to the Bane, ending his reign of terror for good.

However, getting to the Bane means accomplishing the impossible—finding a way to infiltrate his crypt in the deepest recesses of the most ferociously guarded fortress in Atlantis. And everything is only made more difficult when new prophecies come to light, foretelling a doomed effort.... Iolanthe and Titus will put their love and their lives on the line. But will it be enough?

With The Immortal Heights, Sherry Thomas brings the acclaimed Elemental Trilogy to its breathtaking conclusion.

Sherry Thomas is one of the most acclaimed romance authors working today. Her books regularly receive starred reviews from trade publications and are frequently found on best-of-the-year lists. She is also a two-time winner of Romance Writers of America's prestigious RITA® Award.

English is Sherry’s second language—she has come a long way from the days when she made her laborious way through Rosemary Roger's Sweet Savage Love with an English-Chinese dictionary. She enjoys digging down to the emotional core of stories. And when she is not writing, she thinks about the zen and zaniness of her profession, plays computer games with her sons, and reads as many fabulous books as she can find.


Have you had a chance to read THE IMMORTAL HEIGHTS yet? Do ideas constantly percolate through your head even when you're not writing? Do you step away to let your subconscious arrive at the correct next step?