Mary Elizabeth Summer, author of TRUST ME, I'M TROUBLE, on writing what makes your heart sing

TRUST ME, I'M TROUBLE is the second book in the Trust Me series, and we're excited to have Mary Elizabeth Summer here to chat about it. 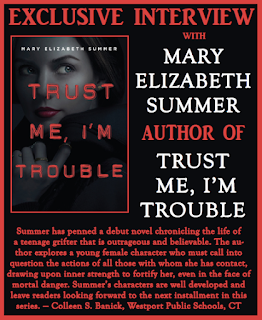 Mary Elizabeth, what was your inspiration for writing TRUST ME, I'M TROUBLE?

The first book in the TRUST ME series, TRUST ME, I'M LYING was all about Julep going up against the mob. And when I had to come up with the antagonist for the second book in the series, I thought to myself, what's worse than going up against the mob?? It took a few days for me to dig up the answer, but when I finally did, it seemed so obvious: she has to go up against one of her own kind, another con artist. Once I knew that, I started fishing around for unconventional ideas of what a con artist might do in a modern world. (The cons in my books are always twists on the ten basic cons.) Around that time, a coworker of mine's boyfriend started taking initiation courses in the Landmark Forum, which has been denigrated by its detractors as a business-based cult. I know nothing of the actual Landmark Forum, but it got me thinking--what if a con artist decided to start a similar sort of entity to fleece people and get them to fleece others, sort of a pyramid scam, but rather than investors, it preys on people looking for something to believe in. Now I won't go into details, because I don't want to spoil anything, but the book took some turns even I didn't see coming. But this idea is what sparked the story for me, for what that's worth.

What do you hope readers will take away from TRUST ME, I'M TROUBLE?

Mostly, I hope readers will be surprised--not just about what happens, but also about how Julep develops as a character through this next adventure. She took several serious hits at the end of the first book. Those of you who have read TRUST ME, I'M LYING know what I'm talking about. The second book faces the consequences of what went down in book one head-on. Julep does not get a pass on the emotional fallout of sacrificing as much as she did in the first book. Some of my favorite scenes are the ones where she's dealing with both the external and the internal ramifications of her choices. She still believes she made the right ones, but she also struggles with the guilt. All that being said, Julep's friends keep her (and us) from getting too mopey. And the bad guys throw everything they have at Julep, so she gets kinda distracted dodging bullets.

There's so much you learn through the process of getting published. Be open to all information. Go get the information from the most updated source you can find. My favorite place for up-to-the-minute publishing advice is Twitter. You can't find more industry professionals in one place than on Twitter. If you're a newbie to Twitter, just Google Twitter for Writers and you'll find exactly what you need to get started. But even more than getting published, learn the craft of writing. Don't just read one book or blog post on writing, read them all. Read them all repeatedly. Because even once you understand something, you might forget it and have to discover it all over again. (This is very true for me.) But don't wait until you know everything to get started. Start now. Because it takes years, and you can't afford to wait, and the world can't afford it either, because it craves story. We need it like breathing. So start now and keep going. And write nothing else but what makes your heart sing. It's not worth the hard work and heartache otherwise. 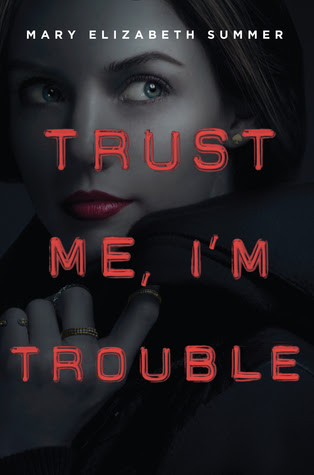 The sequel to TRUST ME, I’M LYING.

Against her better judgment, Julep takes a shady case that requires her to infiltrate a secretive organization that her long-gone mother and the enigmatic blue fairy may be connected to. Her best friend, Sam, isn’t around to stop her, and Dani, her one true confidante, happens to be a nineteen-year-old mob enforcer whose moral compass is as questionable as Julep’s. But there’s not much time to worry about right and wrong—or to save your falling heart—when there’s a contract on your head.
Murders, heists, secrets and lies, hit men and hidden identities . . . If Julep doesn’t watch her back, it’s her funeral. No lie.

Mary Elizabeth Summer is an instructional designer, a mom, a champion of the serial comma, and a pie junkie. Oh, and she sometimes writes books about teenage delinquents saving the day. She lives in Portland, Oregon with her daughter, her partner, and her evil overlor–er, cat. TRUST ME, I'M LYING, a YA mystery, will be released by Delacorte in Fall 2014.


Have you had a chance to read TRUST ME, I'M TROUBLE yet? Do you use Twitter to find publishing advice? Do you reread craft books to rediscover things you've forgotten?