GATHERING DEEP is a companion novel to SWEET UNREST, and we're pleased to have Lisa Maxwell swing by to tell us more about it. 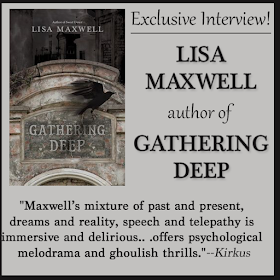 Lisa, what was your inspiration for writing GATHERING DEEP?

A big part of SWEET UNREST had to do with the past still being with us. It’s why the epigraph of the first book is that famous Faulkner quote about the past not being dead because it’s not really even past. In SWEET UNREST, the past (quite literally) is waiting for Lucy when she moves to New Orleans, and her whole character arc has to do with her confronting the choices she made before and finding a way to right the wrongs and put the past to rest. GATHERING DEEP has a similar theme, in that it delves back into the past to reveal the events that shaped Thisbe. Because even though those events are over, and even though most people have forgotten the messier parts of history, Thisbe’s still living with it all. And all that trauma and pain has made her who she is, and is keeping Chloe from a future that she deserves.

I always see readers who want a sequel after a couple has gotten together in book one and had their HEA. This book isn’t a continuation of Lucy and Alex, but in a way, it’s still that sort of after-the-happy-ending-book. In SWEET UNREST, Chloe and her boyfriend Piers are an established couple. They’re committed, they’re there for each other, and they’re clearly in love. But in GATHERING DEEP, Chloe is dealing with so much—her demon of a mother, murders cropping up around the city, feeling completely unmoored, not knowing who she even is—and their relationship is really put to the test.

The hardest scenes to write where those scenes where we see the cracks start forming in their relationship. Those moments when their relationship starts to show some wear and tear were hard scenes, because I wanted them to be subtle. I wanted to capture that, “what is he thinking?” or “what’s happening with Us?” or “does he still love me?” quality that can crop up in any relationship. Those are often the questions that never get spoken aloud, because we’re afraid that once the words are out, we won’t be able to stop what comes next.

In one scene, Chloe and Piers are having this non-argument about what Chloe should do, and there’s all this subtext. She’s reading so much into what he’s saying, and it’s clear that he’s also frustrated, and they are very far apart emotionally. And Chloe thinks to herself, “The frustration vibrating between us felt like some kind of runaway train, and I didn’t know how to stop it without getting broken up myself.” Trying to capture that feeling—the danger of loss and the danger of change—without turning their exchange into melodrama, that was really difficult. There is a lot of fantasy in GATHERING DEEP, but I feel pretty proud of those smaller moments, where things feel very, very real.


I just finished up a revision on a middle grade, so I’m hoping that might find a home soon. And I’m gearing up for the release of my Feb. 2016 book, THE STARS TURNED AWAY, which is a dark and lush reimagining of Peter Pan that features a roguish young captain that I’m head over heels for. Right now, I’m also drafting what will be my 2017 book. I’m not sure how much I’m allowed to say about it at this point, but I pitched it to my editor as Gangs of NY with Magic, and I’m really excited about it.

When Chloe Sabourin wakes in a dark, New Orleans cemetery with no memory of the previous days, she can hardly believe the story her friends tell her. They say Chloe was possessed by a witch named Thisbe, who had used the darkest magic to keep herself alive for over a century. They tell her that the witch is the one responsible for the unspeakable murders that nearly claimed the life of Chloe's friend, Lucy. Most unbelievable of all, they say that Thisbe is Chloe’s own mother. As she struggles with this devastating revelation and tries to rebuilt her life, Chloe wants nothing to do with the magic that corrupted her mother…especially since she feels drawn to it.

Now, a new series of ritualistic killings suggests that Thisbe is plotting again, and Chloe is drawn unwillingly back into the mystical underworld of the French Quarter. To stop Thisbe before she kills again, Chloe and her friends must learn what they can from the mysterious Mama Legba. But when her boyfriend Piers vanishes, Chloe will have to risk everything and embrace her own power to save the one person she has left… even if that means bringing down her mother.

Lisa Maxwell is the author of Sweet Unrest, Gathering Deep (Flux, Fall 2015) and The Stars Turned Away (Simon Pulse, Spring 2016). When she's not writing books, she's an English professor at a local college. She lives near DC with her very patient husband and two not-so patient boys.

Have you had a chance to read GATHERING DEEP yet? What about SWEET UNREST? Do you have trouble capturing feelings without turning it into melodrama?