Kate A. Boorman, author of DARKTHAW, on ritual cueing your creative brain

We're excited to have Kate A. Boorman stop by to share more about DARKTHAW, the second book in her Winterkill series. 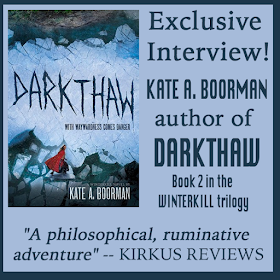 Kate, what was your inspiration for writing DARKTHAW?

DARKTHAW is the second book in the WINTERKILL trilogy. It’s the continuation of Emmeline’s story and picks up during the Thaw (spring) after the deadly winter has passed. Without giving anything away about the first book, I’d say the sequel is truly about change and what responsibilities and consequences come with freedom and choice (things not available to Emmeline in WINTERKILL). At the start, the new life Emmeline has been dreaming about seems within reach. She soon realizes it’s not as easy as grabbing ahold of that life, not just because BIG BAD THINGS complicate matters, but because loyalty and honesty can be complex, and having choice sometimes means you are faced with decisions you don’t want to make. The Thaw (spring) certainly was a metaphoric inspiration for imagery/setting and Em’s emotional arc regarding change.

The nasty show-down of the book was difficult because, well, awful things happen (which are never that much fun to write) but also I wanted to leave enough off the page that it could encompass a broad age range of readership and still feel authentic. Writing scenes that demonstrate the gravity of the situation but also allow the readers’ experience and expectations to guide their interpretation of that situation is tricky.

The WINTERKILL series is technically alternate history, but often is described under that somewhat catch-all phrase of dystopian. I would guess that readers who enjoy historical settings and survival tales would be interested in the series. It’s “disaster fantasy” (my term, feel free to use it!) with a frontier feel.

How long did you work on DARKTHAW?

I started writing it a month or two before the editorial process started in earnest for WINTERKILL, so it was an interrupted process of about a year and a half.

I’ve never written a series; the entire process was new to me. A second book in a trilogy needs to be a logical continuation of the first book and an enticing lead-up to the third, but it can’t simply bridge the action and information in both: it needs to stand on its own and be a satisfying journey unto itself. Negotiating all of that was a challenge. And writing in a world that readers (or, rather, my editorial team) knew well and had particular expectations about was also a new experience. Good, in many ways, but certainly different than crafting a world and characters with no baggage (from a previous narrative) and introducing them to people for the first time.

I feel pretty lucky in that my road was not as painful as it could have been. I have a trunked novel that I wrote and rewrote and tried to get interest in for probably a year. It never went anywhere, and never will—I consider it my learning novel. I signed with an agent for WINTERKILL about a year after I started writing it, and he sold the series really quickly, in about three weeks, because he’s awesome and the market was receptive to it. Your best foot forward (your best work, a good agent) is so important in the path to (traditional) publication, but of course luck also plays a role.

Still waiting for that moment… any day now…

Ritual is really important; it cues your creative brain. I rent studio space (I have to be away from the laundry and the sticky handprints on the walls) and go in 9am-3pm. I work in silence, unless a studio mate is in the space and doing something particularly noisy (in that case, I put on headphones and music). I boil the kettle a lot and even occasionally remember to make myself a cup of tea.

I just turned back HEARTFIRE, the third book in the series, to my editors, so I will be starting in on whichever of the shiny new ideas, jotted frantically in my journal, clamors loudest over the next few days. And then further revisions and copy edits will arrive for the third book and I will have to muzzle the idea for a time! 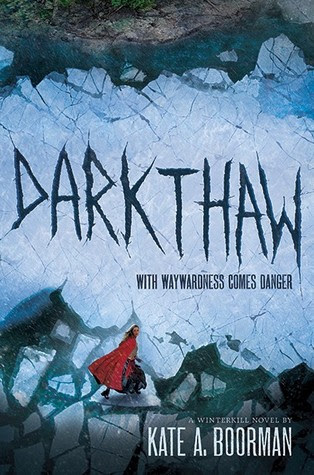 For as long as Emmeline can remember, she’s longed to leave the isolated world of the settlement and explore the wilderness that calls to her in her dreams. And now that the Council has fallen, she will finally, finally get that chance. With First Peoples guide Matisa at her side, Emmeline rallies a brave group to join her on her quest into the unknown, including her beloved Kane and his two younger brothers.

But the journey soon proves far more dangerous than Emmeline anticipated—with warring clans, slavers, colonists, disease, and natural disasters seemingly at every turn. After putting so many lives in danger, she starts to doubt everything she once knew. Did she make the right choice to leave the settlement—and can her relationship with Kane survive the ordeal? Matisa insists that to set things right and to fight the evil that is bringing all this danger and turmoil to the forest, Emmeline must journey to Matisa’s people—even if that means leaving Kane behind.

Kate is a freelance writer and artist from the often-frozen Canadian prairies. She has a nice family and a well-indulged travel bug. She also has an irrational fear of birds, so when you visit, please leave your bird at home. But do visit.
www.kateaboorman.com


Have you had a chance to read DARKTHAW yet? Have you experienced the unique challenges of writing the second book in a series? Do you have a ritual to cue your creative brain?