Emil Sher, author of YOUNG MAN WITH CAMERA, on writing being grueling and immensely gratifying

We're excited to have Emil Sher stop by to share more about his latest novel YOUNG MAN WITH CAMERA. 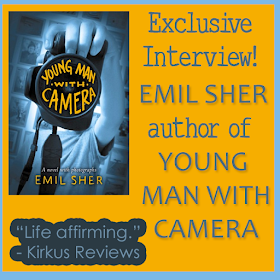 Emil, what did this book teach you about writing or about yourself?

A great question. And I love how it’s phrased. Drop the ‘What’ and it becomes a very different question. As it stands, it implicitly suggests that there’s something to be learned from writing. Actually, it wasn’t so much what I learned as what I was reminded of: that writing is difficult and challenging and grueling and immensely gratifying and often the last thing I want to do at the start of the day because it’s difficult and challenging and…Oh, you get the picture. All this to say, writing YOUNG MAN WITH CAMERA reminded me that the writing life is essentially a lifelong apprentice, that we are constantly learning from others: from our editors (plural in my case, as I was blessed with two from two countries), from our readers, from writers — young, old, new, seasoned — whose work inspires. To learn is to discover, and the richest journeys inevitably lead to a kind of self-discovery we wouldn’t have known otherwise. To a great degree, the act of writing — any creative act, for that matter — leads to fundamental questions about oneself: Why do I feel driven to tell this story? What am I trying to say? What truths do I hope to reveal?

What do you hope readers will take away from YOUNG MAN WITH CAMERA?


The books that linger, the ones that stay with me long after the last chapter are those where something shifted inside me. It’s often a subtle shift, as quiet as shifting sand, but something has moved. It can be an uncomfortable shift, where suddenly we find ourselves on unsteady ground, unsure of our bearings. Suddenly, we have a different perspective. We see things as we didn’t see them before, even fleetingly. More than one reader of YOUNG MAN WITH CAMERA has said the book left them unsettled, and I see that as a good thing, as part and parcel of what a book can do: take us to a place where we might question our assumptions, our long-held beliefs. A large chunk of this novel is devoted to photography, and what is a book but a lens crafted by an author through which we see the world anew? I don’t expect readers to do a hundred-and-eighty degree turn after reading YOUNG MAN WITH CAMERA. But if they are left with some loose threads that can’t be easily tied into a neat bow, well, isn’t that what so much of life is like: messy, sometimes frayed, textured?

My daily ritual begins with an affirmation that my daily ritual is in dire need of a tune-up. There is much to be gained from maintaining a regular schedule, from a workday shaped by self-discipline. Alas, most days those gains glimmer like mirages on the horizon, vivid but forever out of reach. All this to say, my arms have grown weak as I continually try and close the gap between what I hope to accomplish each day and where I actually stand by day’s end (usually in a corner, crumpled in defeat, nursing a cup of tea). I love the idea of a daily ritual but too often find myself getting sidetracked, taking detours that take me farther and farther away from my destination. And I do have a destination, even if I often fall two or three stations shy of pulling in. Some days, I set my sights on a daily word count. Usually it’s five hundred words, many of which will be chucked the next day. But you need some wet clay to play with, to mold, and those five hundred words amount to a ball of clay I can shape and reshape from one day to the next. Other days, I carve out a chunk of time — five consecutive hours — and commit to writing and only writing: no e-mails, no tidying the desk, no other distractions. The trouble is, I am consistently inconsistent. Cue the overdue tune-up. 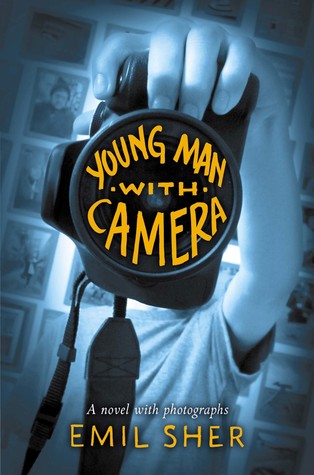 He doesn’t look great in a fedora (he’ll leave that to Leonard Cohen) and he keeps a safe distance from a Stetson but Emil wears many different hats as a writer, whatever the weather. On any given day he might start out wearing a children’s fiction hat, stop to walk his hatless dog, and then return to his desk with a playwright’s hat neatly strapped to his head. A few hours later the strap is untied, the dog is fed, and Emil is back at his hat rack, deciding what to wear next. He might be working on a screenplay, an essay, the lyrics for a musical. Ideas and images are often floating in his head. Hence a hat, to capture them before they drift off.

Whatever the hat, whatever the story, Emil’s workday always begins the same way: he stares at the open sea of a blank page and weeps. How, he wonders, will he possibly fill this vast space with words that count, with language that might last after a page is turned? He feels stuck before he has even started. And then he repeats his daily mantra: “Write.”

And so Emil writes. He writes for the young and once-were-young. He wrote the stage adaptation of Hana’s Suitcase, the beloved Holocaust children’s book by Karen Levine. Other plays for young audiences include Bluenose and Beneath the Banyan Tree. Emil founded Breadbox Theatre in 2005 to introduce early-grade schoolchildren to the joys of live theater with a story that unfolds in a breadbox filled with kitchen-utensil puppets. Several of Emil’s poems have appeared in Chirp magazine and he has also written the story for a children’s ballet performed by Ballet Jorgen. In recent years he has waded into the warm and welcoming waters of children’s fiction. His debut young adult novel, Young Man With Camera, was published in Fall 2015 by Scholastic Canada and Arthur A. Levine Books in the U.S. With two board books by Annick Press in his pocket (A Button Story, A Pebble Story), Emil is writing two picture books that will hatch in 2016 (Scholastic Canada) and 2017 (Groundwood Books).

Emil’s works for older folks include such stage plays as Mourning Dove and his adaptation of Ian Brown’s The Boy in the Moon. His feature-length screenplay, Café Olé, was shot in Montreal, where he was born and raised and that his two daughters now call home. For many years CBC Radio Drama was a second home of sorts: Emil worked as a story editor on Morningside and wrote many radio dramas, including a dozen or so episodes of Afghanada. His personal essays have been anthologized and his works have been translated into Hebrew, Slovak, and Italian. In addition to his mother’s praise, Emil has been recognized with such honours as the 2014 K.M. Hunter Artist Award in Literature, a Canadian Screenwriting Award and a gold medal at the New York International Festival.
Based in Toronto, where he lives with his wife and an untrained dog that ignores him on command, Emil can frequently be found heading east along the 401, towards Montreal and Morin Heights, Quebec.

Have you had a chance to read YOUNG MAN WITH CAMERA yet? Do you find writing to be both grueling and immensely gratifying? Does your writing ritual need a tune-up like Emil's?