Kendare Blake, author of UNGODLY, on characters hanging out and harassing each other

UNGODLY is book three of The Goddess War series, and we're thrilled to have Kendare Blake stop by to share more about it. 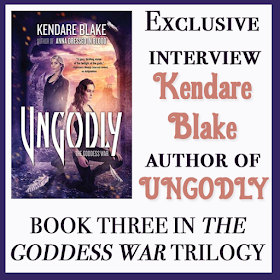 Kendare, what scene was really hard for you to write and why, and is that the one of which you are most proud? Or is there another scene you particularly love?

It's been awhile since I wrote UNGODLY, so this is hard to remember for certain. But I know that the scenes where Andie and Henry get close were tough. Andie is an easy character to write; she's sassy and will punch you if she really loves you. Henry isn't hard either. He's noble and full of honor and stoicism. But it's these same admirable qualities that make intimacy between them a challenge. Neither is in touch with their snuggly side.

As for scenes I love, the ones where my godly guys get to hang out and harass each other I could write for days. Put Hermes and Ares, or Athena and Ares in a room together and let them bitch. They're such prickly assholes.

The Iliad, I hope. And the Odyssey.

It was both long and hard. Years and years and years of serious submitting and rejection, mostly at the short story level. I thought I should do that first. And then, around 2007, my short stories started selling. And then, in 2008, a novel I had written years earlier sold to a small press. In 2009, I sold Anna Dressed in Blood, which came out in 2011 and kicked off the rest. I have five novels out right now. I also have five that will probably never see the light of day. I imagine I will write many more unpublishables before it's all over.

I write in my office or at my kitchen table. Usually the table, so I can keep an eye on the puppy. One more year or two and he'll be grown, and I can move back into my office. I can listen to music while revising but not drafting. I just jam too much. Nothing gets done, and the neighbors become frightened of my singing. I can't work in public. Too easily distracted. Which is why I'm hesitant to go on any writer's retreats, even though they sound fun.

Right now I'm a quarter way through THREE DARK CROWNS 2. Which is weird, because no one will read it for almost three years, and I feel stupid talking to anyone about it, because they don't know what I'm talking about. THREE DARK CROWNS 1 doesn't even come out until late 2016.

As ancient immortals are left reeling, a modern Athena and Hermes search the world for answers in the final Goddess War novel by the acclaimed author of Anna Dressed in Blood.

For the Goddess of Wisdom, what Athena didn’t know could fill a book. That’s what Ares said.

So she was wrong about some things. So the assault on Olympus left them beaten and scattered and possibly dead. So they have to fight the Fates themselves, who, it turns out, are the source of the gods’ illness. And sure, Athena is stuck in the underworld, holding the body of the only hero she has ever loved.

But Hermes is still topside, trying to power up Andie and Henry before he runs out of time and dies, or the Fates arrive to eat their faces.

And Cassandra is up there somewhere too. On a quest for death. With the god of death.

Just because things haven’t gone exactly according to plan, it doesn't mean they’ve lost. They’ve only mostly lost. And there’s a big difference.

Kendare Blake is the author of several novels and short stories, most of which you can find information about via the links above. Her work is sort of dark, always violent, and features passages describing food from when she writes while hungry. She was born in July (for those of you doing book reports) in Seoul, South Korea, but doesn’t speak a lick of Korean, as she was packed off at a very early age to her adoptive parents in the United States. That might be just an excuse, though, as she is pretty bad at learning foreign languages. She enjoys the work of Milan Kundera, Caitlin R Kiernan, Bret Easton Ellis, Richard Linklater, and the late, great Michael Jackson, I mean, come on, he gave us Thriller.

She lives and writes in Kent, Washington, with her husband, their two cat sons (Tybalt and Tyrion Cattister) and their red Doberman dog son, Obi Dog Kenobi.


Have you had a chance to read UNGODLY yet? What about the rest of The Goddess War series? How do you think Kendare is able to write when there is a puppy to play with?!?