Tom Leveen, author of SHACKLED, on the similarity of novels and planets

We're thrilled to have Tom Leveen stop by to tell us more about his latest novel SHACKLED. 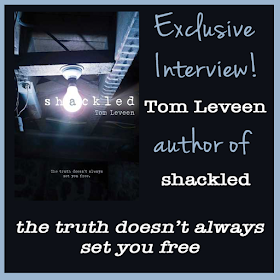 Tom, what was your inspiration for writing SHACKLED?

For me, writing a novel is very much like how a planet forms. A little piece of this and a little piece of that start becoming attracted to each other, and when they collide, their gravity attracts other little bits and pieces, and suddenly there's just one big mass. SHACKLED came from many pieces, including frighteningly true stories about people kept locked away in basement dungeons. Those stories collided with my experiences with panic, which then collided with scraps of a story about a haunted dollhouse...yeah. My stories rarely come from one place!
What scene was really hard for you to write and why, and is that the one of which you are most proud? Or is there another scene you particularly love?

The climax of the novel was hard to write because it is so emotionally graphic. Knowing what words to use and how to use them presented a real challenge. I think and hope I struck the right balance.

It reminded me, for one thing, not to let a boy solve the problem. Pelly takes action on her own throughout the book and David helps her, but he isn't the Big Hero. If anything, he's a sidekick, which is what he should be.

And on that note, it also taught me more about pushing the protagonist to make choices instead of letting things just "happen" to her. Imagine Katniss standing at the lottery in Hunger Games, and after her sister gets picked, Katniss says, "Oh wow. Man. Bummer. That sucks. Yep. Glad it wasn't me." That's not a book anyone would want to read! We want and need our protagonists to make choices -- big ones, bold ones -- to propel the story. Pelly choosing to go in search of her friend is an enormous, dangerous choice for her.

What do you hope readers will take away from SHACKLED?

The first thing I always want is for people to be entertained; to maybe laugh or cry or have their pulse quicken, or all three.

But more importantly, I hope some people will take away that healing of any kind -- emotional and mental healing in this case -- takes time, but it can be done. It can and does happen. There are so many people hurting on the inside, including me, but we can't ever give up.

The road is always long and hard. Period. But so are the best trips!

SHACKLED is my sixth published novel; I'm in an anthology called VIOLENT ENDS and my seventh novel will be out in Fall 2016. But there were at least two novels and innumerable unpublished (and unpublishable) short stories before my first book, PARTY. Even now I've got about thirty potential books rolling around in my head and in my notes, some of which I think will be published someday (hopefully), and some of which are doomed to the ether. I try to remind writers that if they want to do this as a career, they need more than one book inside them. They should be endlessly curious and need to write stories to answer their curiosity.

Nope, no moment like that. I wrote and continue to write because I can't NOT do it. I'm fortunate that I've studied and practiced long and hard enough to do it for a living now, but I'd still write novels if I had another job.

No music anymore; I used to, but not these days. Usually I write new material at a coffee shop, then do revisions at home.

Right now the biggest thing I want to tell writers is to study small business ownership. I mean it! Learn about marketing, finance, social media...everything. The instant you decide you want someone to pay you for writing fiction, you've started a small business. Whether it's for self-pub or traditional, getting paid to write fiction is a job. I wish I'd known more about that before I started querying agents.

Currently I'm working on my second adult urban fantasy in a new series called DEVIANT AEON, with the first novella out in a bundle on Kindle right now. I recently sold my second horror novel, and we are pitching another YA and YA horror this summer. Meanwhile I'm starting work on a new contemporary YA during my writing time. Keepin' busy!

Tom's novels include PARTY, MANICPIXIEDREAMGIRL, SICK, RANDOM, and SHACKLED. He is also in the collection VIOLENT ENDS. His novel ZERO was a YALSA Best Book of 2013. His eighth book will be available Fall 2017.

Previously, Tom has been the artistic director of two theatre companies, and enjoys teaching and speaking to students and adults whenever and wherever possible.


Have you had a chance to read SHACKLED yet? Do you push your protagonist to make decisions rather than letting things happen? Have you studied small business ownership to help with your writing career?