Melinda Braun, author of STRANDED, on continuing to try and improve

We're delighted to have Melinda Braun join us to chat about her debut novel STRANDED. 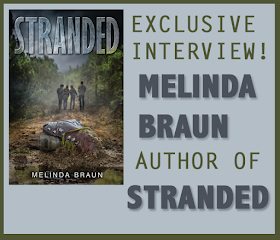 Melinda, what was your inspiration for writing STRANDED?

My inspiration for Stranded came from a few different things:
I grew up in Wisconsin but now have lived in Minnesota for more than half my life, and one thing Minnesotans really love to do in the summer is "go up north" and "go to the cabin". I've been up in the north woods area several times, but had never done serious camping. I had heard about a Boy Scout troop who got lost out on a lake in the BWCA, but they were rescued very quickly. I also heard a few other stories (short news articles) about other campers having to be rescued for various reasons. The BWCA has also had several large forest fires over the years, and I decided to take all that information and roll it up into a camping trip that goes horribly wrong for a small group of teenagers.

How long did you work on STRANDED?

The rough draft was written in four months, which is very quick for me. Then it went through several rounds of revisions with my editor at Simon Pulse, Nicole Ellul, who did an amazing job of offering ideas and guidance, and just making the story tighter, cleaner, and more intense. All told, it was about a year between the first sentence I wrote and when the final edits were completed.

I guess some comparisons to Hatchet have already been made. I guess I would pitch this book as Hatchet meets The Breakfast Club. Okay, now you can probably guess how old I am!

My road to publication was pretty long, it's been almost twelve years to get to this point. I wrote a novel many years ago, but never had any agent interest. Then I went back to school to finish my English degree with a creative writing emphasis at the University of Minnesota, which helped my writing skills immensely. I wrote another novel (YA sci-fi) in 2010 and that novel got me an agent (the awesome Hannah Bowman) in 2011. But that novel ultimately did not sell (came heart-breakingly close). Then I worked on a few more things (more sci-fi and a quieter novel that I do think has some promise). I was working on that when the opportunity from Simon and Schuster came along. So there were plenty of starts and stops and close calls and getting my hopes up and then getting them crushed, but I knew if I kept trying and improving I would get there.

Right now I'm currently working on another survival book for Simon Pulse, tentatively titled Snow Fall. It's about a group of teenagers who go back country skiing in the Colorado wilderness during spring break. Let's just say hilarity does not ensue!

In the tradition of 127 Hours and The Edge, a fascinating and suspenseful novel about a group of teens battling for their lives against the most violent villain in history—Mother Nature.

It’s human instinct to survive…but Mother Nature has other plans.

Plagued with guilt after surviving the car accident that took her sister’s life, Emma ventures into the rugged and mysterious wilderness of the Boundary Waters in search of some much needed peace. But when a freak windstorm kills her guide, Emma and a handful of other campers are forced to fend for themselves. Lost, hungry, and exhausted, the small group must rely on their survival instincts as they travel through the forest towards Lake Superior.

But the Boundary Waters is vast and unpredictable, and as the days drag on, it becomes clear that the group is no match for what Mother Nature has in store—and time is running out.

As they continue to battle the elements, Emma realizes that nature isn’t her only threat: there’s one camper who will do whatever it takes to make it out of the Boundary Waters alive. Even if he’s the only one…

With ripped-from-the-headlines drama, this stirring story of heroism and survival will have you at the edge of your seat until the very last page. Melinda Braun grew up in Wisconsin and received her Bachelor’s degrees in Psychology and English from the University of Minnesota. Currently, she lives in the Twin Cities with her husband and daughter. Although she loves hiking and camping, she does not enjoy portaging canoes. Stranded is her first novel.

Have you had a chance to read STRANDED yet? Will you ever want to go camping again after reading about this camping trip disaster? How inspiring is Melinda's journey to publication?