Essentials of a Pitch by Ava Jae

I am personally very pleased to welcome Ava Jae back to the blog today. When I first started on Twitter years ago, Ava was one of my earliest friends. She did an awesome guest post on Harry Potter for a mutual friend's blog, and through that I discovered Ava's own blog, Writability. Like many others, I was instantly drawn into her warmth and keen insight into writing and publishing.

Since then, Ava has been a writing dynamo. Her blog has become a popular hub online for writers and readers, she signed with a fabulous agent, her debut book releases next year (see below!), and she's now an assistant editor at Entangled Publishing.  Ava's putting all that wonderful experience into the post she shares with us today on how to craft a good pitch. Welcome Ava!

Essentials of a Pitch, A Craft of Writing Post by Ava Jae


When you’re a writer, pitching your book is a scary, but inevitable part of the process. But trying to condense your book from tens of thousands of words (or more!) to a couple paragraphs, or even a sentence can be pretty daunting at first.

Once you get the hang of it, though, I think it slowly becomes less painful. Sometimes.

Through online critiques, critiques I’ve given away or traded, my own writing, and my assistant editing work with Entangled, I’ve seen many a pitch, and I’ve found that oftentimes, writers are missing the essential elements that should be in one. What essential elements, you ask? Well…


All pitches must answer these questions:

Through years of writing my own pitches, I’ve discovered that it’s sometimes easiest to start with a one-sentence pitch, then build up from there—in fact, that’s something I’ve started doing before I write the book in order to keep myself focused. Let’s take a look at some examples, found on the copyright information page of the respective novels:

Simon vs. the Homo Sapiens Agenda (Becky Albertalli): “Sixteen-year-old, not-so-openly-gay Simon Spier is blackmailed into playing wingman for his classmate or else his sexual identity—and that to his pen pal—will be revealed.”

1) Who is/are your protagonist(s)? Simon Spier

2) What does/do your protagonist(s) want? Not to be outed and not to have his pen pal outed.

3) What’s standing between your protagonist(s) and their goal(s)? His blackmailing classmate.

4) What do they have to lose if they fail to achieve their goal(s) (What’s at stake)? He and his pen pal will be outed—which along with being unwanted could (presumably) ruin his relationship with his pen pal.


The Unbecoming of Mara Dyer (Michelle Hodkin): “Seventeen-year-old Mara cannot remember the accident that took the lives of her three friends but, after moving from Rhode Island to Florida, finding love with Noah, and more deaths, she realizes uncovering something buried in her memory might save her family and her future.”

1) Who is/are your protagonist(s)? Mara

2) What does/do your protagonist(s) want? To save her family and her future.

3) What’s standing between your protagonist(s) and their goal(s)? Her amnesia, which is hiding important information, and (presumably) the danger of the deaths following her.

4) What do they have to lose if they fail to achieve their goal(s) (What’s at stake)? Losing her family/future and (possibly—implied) her life.


Otherbound (Corinne Duyvis): “A seventeen-year-old boy finds that every time he closes his eyes, he is drawn into the body of a mute servant girl from another world—a world that is growing more dangerous, and where many things are not as they seem.”

1) Who is/are your protagonist(s)? Seventeen-year-old boy connected to another world.

3) What’s standing between your protagonist(s) and their goal(s)? Inexplicably being drawn into a dangerous world every time he closes his eyes.

4) What do they have to lose if they fail to achieve their goal(s) (What’s at stake)? (Implied) His life.

When it comes to writing query summaries or a back cover copy summary, the same questions must still be answered. I recommend starting with the one sentence (that answers all the questions) and expanding from there for ease—but ultimately it doesn’t really matter how you go about it as long as those four key questions are addressed. Because once you’ve answered those questions, you’ve really gotten to the core of your story: who wants what, why can’t they have it, and why is it important?

And that right there? That’s your story. 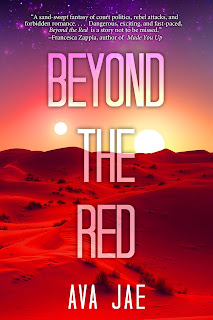 Alien queen Kora has a problem as vast as the endless crimson deserts. She’s the first female ruler of her territory in generations, but her people are rioting and call for her violent younger twin brother to take the throne. Despite assassination attempts, a mounting uprising of nomadic human rebels, and pressure to find a mate to help her rule, she’s determined to protect her people from her brother’s would-be tyrannical rule.

Eros is a rebel soldier hated by aliens and human alike for being a half-blood. Yet that doesn’t stop him from defending his people, at least until Kora’s soldiers raze his camp and take him captive. He’s given an ultimatum: be an enslaved bodyguard to Kora, or be executed for his true identity—a secret kept even from him.

When Kora and Eros are framed for the attempted assassination of her betrothed, they flee. Their only chance of survival is to turn themselves in to the high court, where revealing Eros’s secret could mean a swift public execution. But when they uncover a violent plot to end the human insurgency, they must find a way to work together to prevent genocide.

Ava Jae is a writer, an Assistant Editor at Entangled Publishing, and is represented by Louise Fury of The Bent Agency. Her YA Sci-Fi debut, BEYOND THE RED, is releasing March 2016 from Sky Pony Press. When she’s not writing about kissing, superpowers, explosions, and aliens, you can find her with her nose buried in a book, nerding out over the latest X-Men news, or hanging out on her blog, Twitter, Facebook, tumblr, Goodreads, Instagram, or YouTube channel.