Celebrate Marriage Equality with your favorite YA LGBT Characters, Plus Two Signed Giveaways! 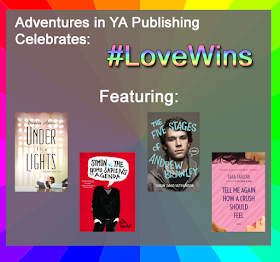 At the end of June, the Supreme Court's ruling opened up the way to marriage equality in all states of the US.

To celebrate this milestone on the way toward equal rights for the LGBT community, we reached out to the authors of several awesome YA LGBT books to find out how their characters feel about these news. Check out their amazing answers, and be sure to enter our giveaway!

Author Question: How would your characters be celebrating marriage equality? 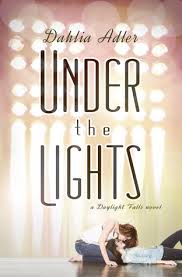 Dahlia Adler (UNDER THE LIGHTS):

Van and Bri would definitely don "I <3 My Girlfriend" T-shirts (Bri already has one, but this seems like a solid occasion for Van to get one too) and get their butts to the LA Pride Parade!

Van may still be working on the public persona part, but this is a huge deal and she'd never miss a chance to celebrate it with the girl she loves, and hopefully help inspire her fans at the same time. And yes, if Ally, Liam, and Josh were in town, they'd definitely be joining in to show their support!
Becky Albertalli (SIMON VS. THE HOMO SAPIENS AGENDA):

I actually posted this on twitter the day the SCOTUS ruling was announced, but I can't think of a better way to explain my characters' reactions to the equality news. :-)

Sara Farizan (TELL ME AGAIN HOW A CRUSH SHOULD FEEL): 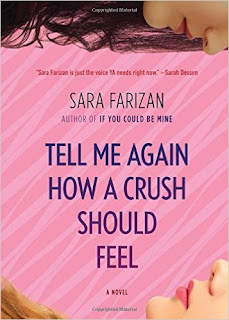 Leila: Wow! I can do that someday! Well, not like right away or anything because you know there's that whole finishing high school thing...and then like, there's that whole being with someone for forever thing? Forever. That's a really long time! But I think I know someone who I wouldn't mind if that were the case. Being with her forever, I mean. Of course you know if she's cool with that! And after college and graduate work or some clear career goals. And so long as we don't get a dog, because I'm allergic. Maybe a hypo-allergenic dog. Yeah. I could see that as a future I'd like to have. And now I can. Wow.

Saskia: How droll. Who wants to be married anyway? A boring and antiquated institution.

Tomas: Yay! My country thinks I'm a full fledged citizen! Ugh I'm going to look so good in a Tux someday.
Taryn: Now if only SCOTUS could also make sure an employee can't be wrongfully terminated based on their gender identity or sexual orientation. Got a long way to go, but it's a start.

Christina: Vampires don't believe in marriage so I don't really care that much. Wanna watch The Lost Boys together?

Greg: The Supreme Court ruled that interracial marriage could be legal in 1967. That's not that long ago and kind of messed up that it was ever illegal. Whoever I decide to marry, I'm glad I'd be able to. So I'm glad for my friends to be able to have the same opportunity.

I think I can sum up how the characters in The Five Stages of Andrew Brawley would be celebrating marriage equality in one picture:

How have you been celebrating marriage equality? Let us know in the comments, and don't forget to enter our giveaway below for a chance to win signed copies of THE FIVE STAGES OF ANDREW BRAWLEY and TELL ME AGAIN HOW A CRUSH SHOULD FEEL!

a Rafflecopter giveaway
Adventures in YA Publishing at 7:16 PM