Betsy Cornwell, author of MECHANICA, on finding the everyday grit to keep on working

We're excited to have Betsy Cornwell here to tell us more about her latest novel MECHANICA. 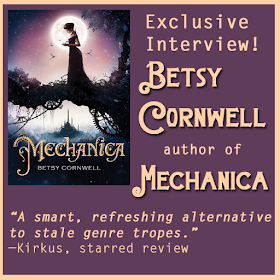 Betsy, what book or books would most resonate with readers who love your book--or visa versa?

I grew up loving Cinderella retellings like Gail Carson Levine's ELLA ENCHANTED and Margaret Peterson Haddix's JUST ELLA, and some of my favorite reviews of MECHANICA have compared it with those books. Since Mechanica is a character-driven story that's told from the perspective of one lonely, intelligent girl, I'd like to think that its readers would also be drawn to my favorite novel, I CAPTURE THE CASTLE, and other open-ended character studies of brilliant teenage girls.

How long did you work on MECHANICA?

My first draft was part of that retellings collection I mentioned, which I wrote as an independent project at Smith College in 2009-10. I initially intended it to be only a ten or twenty-page short story, but it kept expanding and expanding as I thought more about this steampunk-magical world and fell in love with my characters. So my first draft, the skimmed-over bones of a short story, only took a few months, but I worked on the book pretty steadily from 2009 until just a few months ago, when we were still finishing up the last rounds of copy edits.

What do you hope readers will take away from MECHANICA?

First and foremost I hope they will love the characters, the ride of their story, and the world they inhabit. But after that, I hope they'll come away with a broader understanding of what happily ever after, love, and family can mean--and how young women can create all those things for themselves, on their own terms.

Oh, I wish! I'm afraid that I've never had that big key moment--just a very stubborn determination that I was going to see this through. Most of my writing days, especially during my first drafts, involve slogging and struggling more than inspiration or aha! moments. When they come they're wonderful and great fun, but if anything, I think the key to writing and publishing novels is finding the everyday grit it takes to keep on working when inspiration seems so far away.

I recently finished a companion novel to my first book, TIDES, which continues to work with traditional selkie folklore in a contemporary, magical realist context. The companion, COMPASS, follows a young selkie from the US to Ireland, where he hopes to rediscover his lost family but instead finds love with a lonely human girl. That series is dark, moody, and lyrical, so I'm also having fun drafting a New Adult comedy-romance, currently called DARLINGEST ANNA, to keep things balanced!

Nicolette’s awful stepsisters call her “Mechanica” to demean her, but the nickname fits: she learned to be an inventor at her mother’s knee. Her mom is gone now, though, and the Steps have turned her into a servant in her own home.

But on her sixteenth birthday, Nicolette discovers a secret workshop in the cellar and begins to dare to imagine a new life for herself. Could the mysterious books and tools hidden there—and the mechanical menagerie, led by a tiny metal horse named Jules—be the key to escaping her dreary existence? With a technological exposition and royal ball on the horizon, the timing might just be perfect for Nicolette to earn her freedom at last.

Gorgeous prose and themes of social justice and family shine in this richly imagined Cinderella retelling about an indomitable inventor who finds her prince . . . but realizes she doesn't want a fairy tale happy ending after all.

I wrote my first novel, TIDES, as a student at Smith College. After graduating from Smith and getting an MFA from Notre Dame, I moved to Ireland to live with the fairies.

My second novel, MECHANICA, a steampunk retelling of Cinderella, is coming in August 2015. A companion novel to TIDES, currently called COMPASS, is slated for early 2016.

I'm also the story editor for Parabola Magazine, a reader for Teen Ink Magazine, and a teacher at Johns Hopkins CTY. I keep dairy goats in Ireland and spend a lot of time hunting for wild hazelnuts.


Have you had a chance to read MECHANICA yet? Have you started writing a short story only to have it turn into a novel? What do you do when inspiration seems far away?