Alan Gratz, author of CODE OF HONOR, on dangling your main characters into the fire

CODE OF HONOR is the latest novel by Alan Gratz, and we're excited to have him here to share more about it. 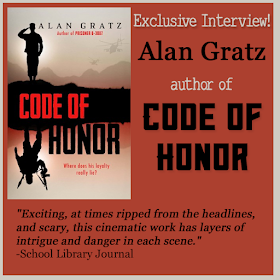 Alan, what was your inspiration for writing CODE OF HONOR?

The idea for CODE OF HONOR was originally, "How do I write a YA version of the TV show Homeland?" The book is very different than the show Homeland, of course, but that's where it began. How could I write a thriller about Middle Eastern terrorists in America that kept you guessing all the way to the end?

I learned that I love writing thrillers! This won't be the last one I write, for sure. I also began to understand how thrillers work--whether they're novels, TV shows, or movies. It's all about dangling your main characters into the fire and then yanking them out again at the last second. (While always turning up the heat each time, of course!)

What do you hope readers will take away from CODE OF HONOR?

I hope anyone who reads CODE OF HONOR will have fun first and foremost--my main goal with every book I write is to entertain. But with this one, I hope I'm also able to show some of the issues Persian- and Arab-American teenagers deal with today.

I wanted Kamran and his older brother Darius to have shared a common "game" in their childhood where they pretended to battle all kinds of pop culture villains. The kind of adventures you make up in the backyard when you're little. But I also wanted those games to be grounded in Persian mythology. The real "Aha!" moment for me came when I discovered the pre-Islamic Persian epic of Shahnameh, about an Iranian hero of legend named Rostam. It's really terrific, and very different from the mythologies of Western civilizations. I had a lot of fun mashing up Persian mythology with American pop-culture villains like Darth Vader, the Joker, and Lord Voldemort! You definitely won't see that in any other book. :-)

I should have three books coming out next year or so--The Monster War, which is the third book in my League of Seven steampunk trilogy; Blood and Honor, a thriller about an Irish kid who is a spy in the Hitler Youth in Nazi Germany during World War II; and Ban This Book, a contemporary novel about a girl who starts a secret banned-book library out of her locker when a well-meaning parent starts getting books removed from the school library. I'm in the process of editing all three! (Oy!) 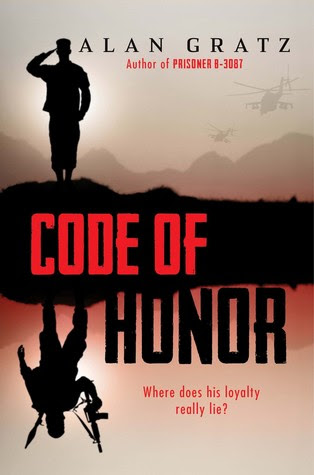 A timely, nonstop action-adventure about the War on Terror--and a family torn apart. When seventeen-year-old Iranian-American Kamran Smith learns that his brother has been labeled a terrorist, he knows something isn't right. In a race against time, it is up to Kamran to prove his brother's innocence, even as the country has turned against him and his family. With the help of a ragtag team of underground intelligence professionals, Kamran must piece together the clues and the codes that will save his brother's life--and save his country from possibly the largest terrorist attack since 9/11.

Acclaimed author Alan Gratz takes readers on a nonstop action-adventure journey through the emotional, political, and cultural landscape of the War on Terror, while weaving a poignant tale of two brothers.

Alan Gratz was born and raised in Knoxville, TN, home of the 1982 World's Fair. After a carefree but humid childhood, Alan attended the University of Tennessee, where he earned a College Scholars degree with a specialization in creative writing, and later, a Master's degree in English education.
In addition to writing plays, magazine articles, and a few episodes of A&E's City Confidential, Alan has taught catapult-building to middle-schoolers, written more than 6,000 radio commercials, sold other people's books, lectured at a Czech university, and traveled the galaxy as a space ranger. (One of those is not true.)

Alan is the author of one of the ALA's 2007 Top Ten Best Books for Young Adults, Samurai Shortstop (Dial 2006), and Something Rotten (Dial 2007), a contemporary young adult murder mystery based on "Hamlet." He is currently at work on a sequel, Something Wicked (Dial 2008), and a middle-grade novel about family, baseball, and American history, called The Brooklyn Nine (Dial 2009).

Alan now lives with his wife Wendi and his daughter Jo in the high country of Western North Carolina, where he enjoys reading, eating pizza, and, perhaps not too surprisingly, watching baseball.

Have you had a chance to read CODE OF HONOR yet? Do you like dangling your characters in the fire? Have you found things during research that added the perfect touch to your story?