Mark Alpert, author of THE SIX, on writing a novel full of real science

We're thrilled to have Mark Alpert join us to share more about his latest novel THE SIX.

Mark, what was your inspiration for The Six? 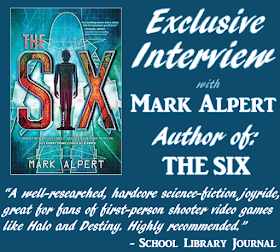 A few years ago I started reading about the concept of the Singularity, the hypothetical point in the future when machine intelligence is expected to leap past human intelligence. Artificial-intelligence programs have already mastered many complex skills -- consider self-driving cars, which will soon become commercially available, or the Watson program that defeated the champions of Jeopardy on television -- and it’s not too farfetched to imagine an AI so intelligent that it can reprogram itself and set its own agenda. Computer scientists are worried enough about this possibility that they’ve started to think about ways to ensure that advanced machines don’t turn against the humans who create them. Other researchers have focused on connecting humans to machines using implanted microchips that could operate artificial limbs or restore eyesight to the blind. As scientists learn more about the brain, it may someday become possible to replicate it in silicon, creating a machine that could hold a person’s intelligence after his or her body dies.

Researchers argue over how far away the Singularity is. It could be years, decades or centuries. But it occurred to me that the first generation to experience the Singularity in their lifetimes might very well be today’s teenagers. So I thought it would be appropriate (and fun!) to write a Singularity novel aimed specifically at young adults.

What do you hope readers will take away from The Six?

The Six is a novel that’s full of real science. The fictional laboratory where the book begins is based on the IBM Thomas J. Watson Research Center in Yorktown Heights, New York, which I visited in 2011 to investigate possible stories for Scientific American. The procedure used to scan Adam’s brain is based on a real application of medical nanotechnology; researchers can inject billions of microscopic spheres into a patient’s bloodstream, and these nanoparticles can bind to certain body tissues. And the electronics at the heart of the Pioneer robots are modeled on the brain-mimicking neuromorphic circuits now being developed by IBM and other companies.

All this real science is woven into the book’s plot, amid scenes of robot-versus-robot combat and helicopter-versus-tank battles and underground nuclear explosions. My hope is that the descriptions of these cool technologies will inspire young readers to learn more about them. When I was a teenager I was inspired by books such as Isaac Asimov’s I, Robot and Michael Crichton’s The Terminal Man. I’ll be delighted if The Six does the same for today’s kids.

I was a journalist for many years before I became a published author. I wrote fiction as a hobby while working for newspapers, magazines and television shows, and I completed four novels that went unpublished. About ten years ago, while I was working on a special issue of Scientific American about Albert Einstein, I had an idea for a science thriller about Einstein’s Theory of Everything. This idea eventually developed into my first published novel for adults, Final Theory, which came out in 2008 and became an international bestseller, translated into more than twenty languages. Over the next few years I wrote three more science thrillers for adults: The Omega Theory (2011), Extinction (2013), and The Furies (2014). But because I have teenage children, my dream was to write a novel that they and their friends could enjoy. The Six is that novel. 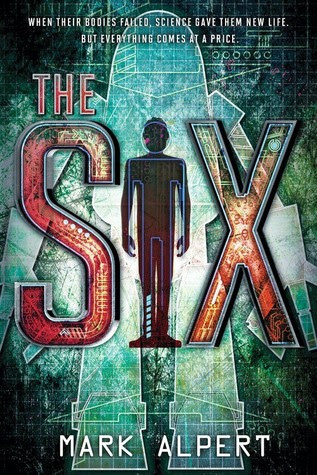 To save humanity, they must give up their own.

Adam's muscular dystrophy has stolen his mobility, his friends, and in a few short years, it will take his life. Virtual reality games are Adam's only escape from his wheelchair. In his alternate world, he can defeat anyone. Running, jumping, scoring touchdowns: Adam is always the hero.

Along with a select group of other terminally ill teens, Adam becomes one of the Six who have forfeited their bodies to inhabit weaponized robots. But with time running short, the Six must learn to manipulate their new mechanical forms and work together to train for epic combat...before Sigma destroys humanity.
Purchase The Six at Amazon
Purchase The Six at IndieBound
View The Six on Goodreads 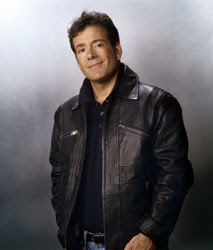 Mark Alpert, author of Final Theory, The Omega Theory, Extinction, The Furies, and The Six, is a contributing editor at Scientific American. In his long journalism career he has specialized in explaining scientific ideas to readers, simplifying esoteric concepts such as extra dimensions and parallel universes. And now, in his novels, Alpert weaves cutting-edge science into high-energy thrillers that elucidate real theories and technologies.

A lifelong science geek, Alpert majored in astrophysics at Princeton University and wrote his undergraduate thesis on the application of the theory of relativity to Flatland, a hypothetical universe with only two spatial dimensions. (The resulting paper was published in the Journal of General Relativity and Gravitation and has been cited in more than 100 scholarly articles.) After Princeton, Alpert entered the creative writing program at Columbia University, where he earned an M.F.A. in poetry in 1984. He started his journalism career as a small-town reporter for the Claremont (N.H.) Eagle Times, then moved on to the Montgomery (Ala.) Advertiser. In 1987 he became a reporter for Fortune Magazine and over the next five years he wrote about the computer industry and emerging technologies. During the 1990s Alpert worked freelance, contributing articles to Popular Mechanics and writing anchor copy for CNN's Moneyline show. He also began to write fiction, selling his first short story ("My Life with Joanne Christiansen") to Playboy in 1991.

In 1998 Alpert joined the board of editors at Scientific American, where he edited feature articles for the magazine and wrote a column on exotic high-tech gadgets. With his love for science reawakened, he wrote his first novel, Final Theory, about Albert Einstein and the historic quest for the holy grail of physics, the Theory of Everything. Published by Touchstone in 2008, Final Theory was hailed as one of the best thrillers of the year by Booklist, Borders and the American Booksellers Association. Foreign rights to the novel were sold in more than twenty languages, and the movie rights were acquired by Radar Pictures, a Los Angeles production company. Alpert continued the saga of the Theory of Everything in his second book, The Omega Theory, a gripping story about religious fanatics who try to trigger Doomsday by altering the laws of quantum physics. His next thriller, Extinction, focused on brain-computer interfaces and a collective intelligence that decides to exterminate the human race. His fourth novel, The Furies, told the story of an ancient clan who share a genetic mutation so shocking that its discovery could change the course of history. And his first Young Adult novel, The Six, is about six dying teenagers whose lives are “saved” when their minds are downloaded into U.S. Army robots.

Alpert lives in Manhattan with his wife and two non-robotic teenagers. He's a proud member of Scientific American's softball team, the Big Bangers.


What did you think of our interview with Mark Alpert, author of THE SIX? Let us know in the comments!