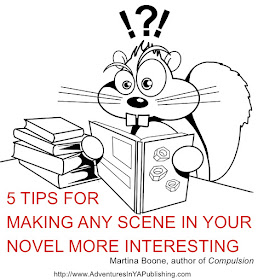 I'm about to spill one of my worst kept writing secrets, by which I mean that I'm going to talk about why I include a lot of the kinds of scenes that  legendary agent and author Donald Maass, whose many books about writing I usually agree with in their entirety, says to leave out of a novel. What kind of scenes are those? The ones that take place in kitchens, living rooms, and cars driving back and forth. Let's call them the everyday scenes.

Now it's true that these scenes are the ones that usually are left out of successful novels--especially young adult novels. Why? Because they tend to be low-tension scenes. Scenes where people are sitting around talking and not much is happening.

But low action doesn't have to mean low tension. Novels aren't necessarily about action; they're about conflict. And conflict can occur anywhere. That's what a lot of writers overlook, and it can result in low-tension (aka boring) action scenes as well as scenes that end up being just two characters talking.

There are many valid reasons to have those everyday scenes, though. Which means it's a good thing there are easy ways to beef them up so they engage instead of disengage your reader.

Opportunities for conflict come from the past and the future as well as the present.

Everyday scenes tend to be about family, something which is absent in a lot of young adult novels today, and even in many popular novels. Family is important to me, though, and the Heirs of Watson Island series is an exploration of what it means to be a family, not just in the nuclear sense but in the sense of being connected to a place and a group of people and the larger family of humanity. Because the magical gifts and the curse have created problems for three hundred years in each of the families involved, there are multiple generations in the series, each with their own secrets, mysteries, and conflicts. The house in which those characters were raised is also a main character in the novel, and so many scenes take place in the rooms where families live, including kitchens and living rooms. These places are the heart of families, and they can add heart to a book.

The key to making everyday scenes, or really any scenes, interesting is to use the past and the future, as well as the present, to make sure the scenes contain enough dramatic tension.

There are five quick ways to add tension to a scene:

Add action in progress in the present. An action scene rarely lacks tension because we're watching what's going on and wondering whether the character will fail or succeed. Giving an everyday scene a small action to focus around will not only add tension but also help you ground the setting. It creates anchors for internal thoughts and clues to background for the characters and the story. Action can be any task, really. Cooking a meal--will be be successful or unsuccessful? Will someone cut themselves as they react something in their environment? Even something as simple as trying to make a phone call is a task that has the possibility of failure. Examine your scene for something the characters can be doing and build in the uncertainty about outcome.

Add tension between characters that stems from the past, the present, or the future. Characters should always have a goal in a scene. This goes as much for other characters as for your main character. This doesn't have to be stated aloud, but the author must certainly know what the character want. And here's two quick tricks. Make sure the characters don't want the same thing. Make sure that they can't all win. Tension exists when someone wins and someone loses or compromises. Your main character should rarely succeed completely, therefore, every encounter must cost her something. She must give up something in each scene.


Add the element of surprise or revelation. What the characters must give up, already gave up, or are in the process of giving up, can be as simple as information they didn't want to part with. Surprise or revelation can come through action, through dialogue, through any number of ways. But if you provide something unexpected in a scene, it will rarely be boring. For an even bigger payoff, give readers something to wonder about for some time before the surprise is revealed. That sense of wonder and curiosity will help keep them turning pages.

Add anticipation or a sense of foreboding. There are many different way of building anticipation. One of the easiest is to provide a goal and make the outcome of achieving that goal uncertain. Adding stakes for failure is another way to invest the reader in the story. While trying to figure out what a character is doing is going to make readers curious, letting them know ahead of time that there is danger involved and where that danger is coming from--and then, hopefully, having it come from an unexpected twist--allows them to feel a bit of the adrenaline that your characters are feeling.

Add a change in outcome. Hopefully, a change in outcome will be the natural conclusion of adding in one of the four types of dramatic tension I've included above, but it is critical enough to bear repeating. Each scene needs to change something in the story. If there is no change, there is no story, and therefore, that scene should be revised or cut. Of course, change doesn't necessarily mean change in the characters' circumstances. It could just as easily be a change in their viewpoint, their relationship, or their understanding of the situation they are in. But something must change. They cannot leave a scene at the same place they entered it.

Honestly, the more of these elements of tension you put into a scene, the more likely you are to have a great scene, and don't forget that these elements can come from past events, or be triggered by elements of place, as well as deriving from the present. Every place and character has a history, needs, goals, and secrets. Use them. Even action scenes can benefit from more dramatic tension. 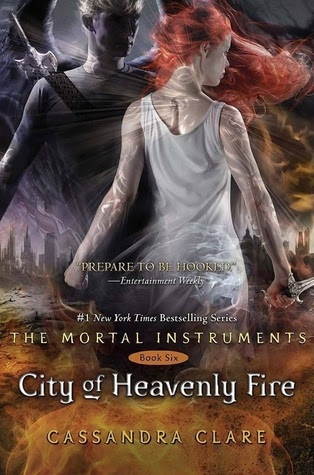 Shadowhunters and demons square off for the final showdown in the spellbinding, seductive conclusion to the #1 New York Times bestselling Mortal Instruments series.

Darkness has descended on the Shadowhunter world. Chaos and destruction overwhelm the Nephilim as Clary, Jace, Simon, and their friends band together to fight the greatest evil they have ever faced: Clary’s own brother. Nothing in this world can defeat Sebastian—but if they journey to the realm of demons, they just might have a chance…

Lives will be lost, love sacrificed, and the whole world will change. Who will survive the explosive sixth and final installment of the Mortal Instruments series?