Before we welcome our guest poster today,  I'd like to request your participation in an exciting upcoming event the end of this month. Can you believe that it has been 18 years since Harry Potter was first released? So many authors whom I have had the pleasure to work with in these posts and on this blog have mentioned what an influence this magical series had on their writing. So, in celebration of Harry's birthday (and JK Rowling, who will turn 50!), we plan to host a special celebration for July 31!

If you were inspired to write, or if your writing was any way influenced by JK Rowling, we'd love to hear from you! Please send a paragraph (or two) telling us how Harry Potter influenced your writing and you may be included in our upcoming celebration. Email posts to AYAPLit AT gmail.com, and please put Happy Potter Day in the subject line. We'll let you know before July 31 if yours is one of the submissions chosen.

Now, speaking of the UK...our author today has written a charming serious set in Victorian London featuring a young lady spying for The Agency, an all-female investigative unit. YS Lee put an enormous amount of research into bringing Mary and her London to life, and is here to share with us an inside look at some of the detail that goes into the recreation of an historical setting. Be sure to check out her most recent release at the end as this series sounds fresh and appealing (especially for someone recently bent on re-reading all of Jane Austen)!

Author Math, A Craft of Writing Post by Y.S. Lee


One of the things I find consistently surprising in historical fiction is how very long it takes to get from one place to another. My Agency series (aka the Mary Quinn Mysteries in Great Britain and Australia) is set in London between 1858 and 1860. They’re too urban to make use of the railways that criss-crossed the country and a shade too early for the first intra-city underground trains (the Metropolitan Railway opened in 1863). Most of the travel in my novels takes place either on foot or by horse-power: carriages, cabs, and of course, simply riding on horseback. By 1858, there were also horse-drawn omnibuses that, like our present-day buses, plied regular routes through the city.

The climax of Rivals in the City features a fair amount of running around between locations in central London. One of the first things I did when plotting it was create a chart showing the different sites, the distances between them, and how long it would take to move from one point to another. In order not to spoil the plot, I’ve renamed the locations after four of my favourite North American cities. This, of course, is a fiction upon a fiction; the real locations are London landmarks. Otherwise, here’s what my chart looks like:


I assumed an average running speed of about 6 miles/10 km per hour - a pretty fast clip for a woman burdened with heavy clothes on slick, inconsistently paved, and poorly lit urban streets (it’s after dark). But I’m talking about the women of the Agency, an elite detective firm. Not only are they in excellent physical form, they are responding to an emergency.

I assumed a horse trot of 7-8 mph, since poor road quality and night-time visibility again make it impossible to canter. With horseback, I also needed to allow tie-up time and the need to rest or change horses. Riding turned out to be not much faster than running, but riding made it possible for a character to arrive at an important location looking respectable.

As it worked out, the time elapsed for a series of important messages to be relayed was:


This left me with a space of 2 ¼ hours, the minimum period of time my heroine, Mary Quinn, would be alone in “Vancouver” after sounding the alarm. It turned out to be the perfect window of time to allow her to take action, imperil herself, yet receive help at just the right moment.

I love this kind of concrete plotting, and wonder if any of you do the same. How do you work out timelines, near-misses, and rescues? 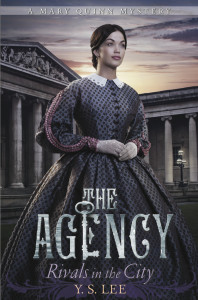 In a tale steeped in action, romance, and the gaslit intrigue of Victorian London, Mary Quinn’s detective skills are pitted against a cunning and desperate opponent.

Mary Quinn has a lot on her mind. James Easton, her longtime love interest, wants to marry her; but despite her feelings, independent-minded Mary hesitates. Meanwhile, the Agency has asked Mary to take on a dangerous case: convicted fraudster Henry Thorold is dying in prison, and Mary must watch for the return of his estranged wife, an accomplished criminal herself who has a potentially deadly grudge against James. Finally, a Chinese prizefighter has arrived in town, and Mary can’t shake a feeling that he is somehow familiar. With the stakes higher than ever, can Mary balance family secrets, conflicting loyalties, and professional expertise to bring a criminal to justice and find her own happiness? 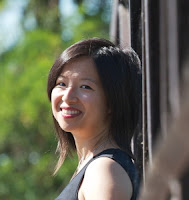 Y S Lee was born in Singapore, raised in Vancouver and Toronto, and lived for a spell in England. As she completed her PhD in Victorian literature and culture, she began to research a story about a girl detective in 1850s London. The result was her debut novel, The Agency: A Spy in the House. This won the Canadian Children’s Book Centre’s inaugural John Spray Mystery Award in 2011.