We are thrilled to welcome author Stefanie Gaither to the blog this month as our columnist for Ask a Pub Pro! Stefanie is the author of the very popular and thrilling Falls the Shadow, with the sequel coming in 2016. She's here to answer your reader questions on unusual names for fantasy, how many books can an author squeeze into a series, the balance of fiction and fact for science fiction, and how many POV characters can make up an ensemble.

Also, please do not forget next week's Happy Potter Birthday celebration!  If you were inspired to write, or if your writing was any way influenced by JK Rowling, we'd love to hear from you! Please send a paragraph (or two) telling us how Harry Potter influenced your writing and you may be included in next week's celebration.

Email posts to AYAPLit AT gmail.com, and please put Happy Potter Day in the subject line. We'll let you know before July 31 if yours is one of the submissions chosen.

1) Writer Question: I'm worried about the names I'm creating for my WIP. My story is a fantasy, and the names I've envisioned sometimes have hyphenated endings to add a suffix meaning onto the name. But it seems that I've heard hyphens in names are frowned upon. I'm keeping the names very simple, even with the hyphens, so that it will not be confusing to the reader. Do you think that will work? Or would the use of hyphens be too off-putting? Would an apostrophe be better?


I actually just finished up a fantasy WIP of my own, so I understand the name struggle :) I don’t think that hyphens in names are immediately off-putting—so long as it fits the story and/or character. Other readers may feel differently, of course. If you’re really concerned about it, maybe there’s a way to compromise? Have their formal name hyphenated, but perhaps they go by a nickname that flows more easily for the reader?

Either way, one thing I like to do when figuring out names is to ask people unfamiliar with my story/character what comes to mind when I mention a person named “XYZ” or whatever; in your case, maybe write the name and then ask friends and fellow writers what immediately jumps into their minds when they see it—and if it’s in line with what you’re going for with this particular character, then you’re golden. Poll as many people as you can. Of course, not everyone will have the same answer, but it will give you a general idea of what the name you came up with is “showing” potential readers about this character—and whether or not they’re stumbling over things like hyphens.


2) Writer Question: My question is more to do with marketing than craft. I've envisioned a series that would ideally be 9 books, but am afraid that it would be considered too long by agents and editors. Are editors interested in anything longer than a trilogy? Should I keep how long I'm planning the series to myself?

I’m neither an agent nor editor, so I can only repeat things and advice I’ve heard; and, based on what I “know” from this, the idea of a nine book deal is sort of unheard of (particularly for debut authors). It’s possible that you could end up with a nine book series, but I’d say you have to concentrate on selling the first couple books in that series, initially. You could pitch the first book to an agent/editor as “a standalone title with potential to develop into a longer series of books” or something like that.

I have several author friends who initially sold a series of two or three books, but I’ve heard of very few who start with more than that. If those first books become wonderfully successfully, of course there’s a chance of the publisher asking for multiple more books in the same series, but I wouldn’t count on them committing to nine books upfront.

In my case, my first book, FALLS THE SHADOW, was initially only a one-book deal, but it did well enough that, when we pitched a second book set in the same world, my publisher offered a contract on that one too, so now it’s a duology.

3) Writer Question: I'm writing a YA science fiction and am wondering how much of the science I can bend. I know it needs to be meticulously researched, but it's also fiction. Generally speaking, how much fiction can I work into the science aspect?

I don’t know that there is one single accepted ratio of science to fiction in the genre; I’ve read a wide spectrum of it, myself. I would say it depends on what sort of story you’re trying to tell, and the type of reader you envision yourself writing for. As for me, personally, almost every detail I work into my science-fiction books has *some* basis on scientific theory or law, and I try to keep things plausible. But, in the end, if I need to fudge a bit of science to make things work, I do. That’s part of the fun of writing science fiction, I think. Besides, there’s so much of our world that we still don’t understand; who says that the crazy “fiction” parts I’m making up might not be true, right?

4) Writer Question: How many POV characters be worked with in a YA? I have an ensemble cast and would like to have 4-5 POVs, but am concerned that might be too much.

I’d say 4-5 is a lot, but again, just about anything can work, if it’s written well enough. Which is a total cop out answer. But it’s true! It’s all about execution and what the story needs. So, just be sure to ask yourself if the story truly needs every one of these povs. And just know that, with so many characters vying for the reader’s attention/connection, you’ll have to work extra hard to make every word that a character gets from his/her pov worth that much more. I love ensemble casts when done well, but a lot of times I find the characters in these stories more underdeveloped than I’d like. So, definitely a challenge! But not impossible. 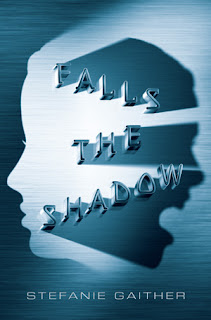 Stefanie Gaither writes YA novels about killer clones and spaceships, with the occasional romp with dragons and magic-users thrown in for good measure. Said writing is generally fueled by an obscene amount of coffee and chocolate, as well as the occasional tennis and/or hiking break. She's represented by Sara Megibow of KT Literary, and her debut, FALLS THE SHADOW, is available now from Simon and Schuster Books For Young Readers. The sequel to FALLS will be released in 2016!