A Debut Lesson: The Trouble with Measuring Success with Lori Goldstein + Giveaway

We're so excited to have Lori Goldstein on the blog today, especially since she and her book Becoming Jinn were one of our First Five Pages Workshop success stories in 2013! VOYA gave Becoming Jinn a starred review saying: "The genie theme is original and appealing. Azra is likable; her struggles--even factoring in the genie issue--are real and relatable. This well-written title . . . will not stay on the shelf."

A Debut Lesson: The Trouble with Measuring Success

We all want it even if we don’t come right out and say it: success. The trouble is, success is a moving target, constantly changing.

There was a time when “making it” was signing with an agent. When “success” was getting the book deal. “Who cares if my book hits ‘The List’? I’ll have a book on the shelves!”

Been there, said that? Yeah, me too.

Cut to two months after release. “Who cares if my book hits ‘The List’?” I do. Turns out, a lot.

Been there too? The good thing is, you and I are not alone in having hopes and dreams and goals. And those are good things to have. That’s how we got published in the first place.

Being a writer takes guts. And cojones. We who go down this path are as arrogant and cocky as we are insecure and plagued with self-doubt. Think about it: there are thousands of people trying to get a book deal every year. Agents read hundreds of query letters a week. To send a query out is to believe your work is better than the rest, that your manuscript can and should be published, that your book deserves space on bookstore and library shelves alongside household names like John Green or Suzanne Collins or J.K. Rowling (depending on your luck with the alphabet). Arrogant and cocky.

When you sign your first book publishing contract, you may think the self-doubt disappears. What few will admit is that the opposite is true. Let’s skip past the fears that come when working with an editor for the first time as here I’m talking about what happens around release.


And around release, the first reader review that tears your book apart guts you like the death of a certain Game of Throne character whose demise still haunts. The first trade publication to sum up years of your work in a pithy, uncomplimentary paragraph will send you down a spiral where you will call on every writing friend who has been there before (and believe me, they all have, big or small, “Listers” or not) to toss down a rope and haul you back up. The first event you do where three people come will make you want to pack it in.

Our hopes and dreams have built up for years while we’ve waited for publication—for some that might be the two years since signing the contract and for others that might be the ten or twenty years spent writing. How can anything live up to expectations with that much history?

The answer is one I’ve learned this year: nothing can and yet everything should. It’s easy to concentrate on the negative. Why is it that that one bad review seems to overshadow a dozen great ones? Why is that starred trade review not making you do cartwheels? Why do you remember the one event that was sparsely populated and not the ten where every seat was filled? Why when sales numbers are good, is the focus solely on making them even better?

Because we measure success too harshly. And when we do that, we miss out.

Living inside this bubble of publishing, it’s too easy to forget how the “real world” measures success. And to the real world, having a book in a real, live bookstore is success. Having an ebook downloaded the world over is success. Receiving a fan letter in the mail where a reader says she loved your book more than Harry Potter is success (and yes, that actually happened to me—cue *fainting*). Having your name in a newspaper attached to a book festival that thousands will come to is success.

And the moment it isn’t success for you is the moment you need to take a step back and give yourself first a slap and then a break. Having goals and dreams is important. Having ambitions is perfectly fine. Just don’t let what you don’t yet have overshadow what you do.

You have a book in the world. Appreciate it. And now, write another. 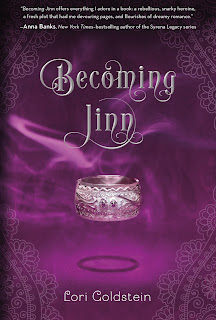 Wishing doesn’t make it so, Azra does.

Azra has just turned sixteen, and overnight her body lengthens, her olive skin deepens, and her eyes glisten gold thanks to the brand-new silver bangle that locks around her wrist. As she always knew it would, her Jinn ancestry brings not just magical powers but the reality of a life of servitude, as her wish granting is controlled by a remote ruling class of Jinn known as the Afrit.

To the humans she lives among, she's just the girl working at the snack bar at the beach, navigating the fryer and her first crush. But behind closed doors, she's learning how to harness her powers and fulfill the obligations of her destiny.

Mentored by her mother and her Zar "sisters," Azra discovers she may not be quite like the rest of her circle of female Jinn . . . and that her powers could endanger them all. 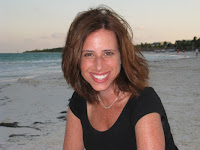 Born into an Italian-Irish family, Lori Goldstein earned her bachelor’s degree in journalism and worked as a writer, editor, and graphic designer before embracing her love of fictional people. Lori is the author of the young adult contemporary fantasy series Becoming Jinn (Feiwel and Friends/Macmillan, April 21, 2015; Sequel, Spring 2016). When not writing or reading (preferably from a sandy local), Lori can be found chatting books and perfecting the art of efficient writing through Twitter.

Click here to enter the SUMMER OF JINN Blog Tour Giveaway! Lori's giving away two $20 gift cards: one to her local indie Harvard Bookstore and one to B&N! Redeemable in person or online. Open internationally. And she’s also running a special promotion in honor of the summer season. Buy #BecomingJinn by July 30 and receive free bracelet temporary tattoos. More info on Lori’s blog.

Follow all the stops on the Summer of Jinn Blog Tour: