I love theme. For me, it is the hub of the wheel around which the story turns...after you write a compelling story and discover what that theme is, that is. That's why I'm so happy to welcome author Claire Caterer to the blog today with her excellent insight on why theme matters and how to judicially weave it into our stories.

As another Harry Potter fan, I've known Claire on Twitter for a while and am so glad she gave me an excuse in this post to include some Potter gifs! Her new book, The Wand and the Sea, releases in just a few days. Be sure to check out her giveaway for it at the end of the post!

Thoughts on Theme, a Craft of Writing Post by Claire M. Caterer


Hands down, this is the best question I’ve ever gotten from a student during a school visit:

How do you decide what your theme is going to be?

Bless those students! They learn all the right terms—character, setting, plot, denouement, and yes, theme. So they want to plug all those things into their stories. Just tell me where to put the theme, they say, and I’ll install it.

I’d like to say I had a crackerjack answer ready for this kid, but I stammered out some lame version of what I later thought hard about and decided to write down here. I have the feeling that kid will never read this, but at least he got me thinking.

How do you decide what your theme is going to be? Short answer: You don’t.

What the Heck Is a Theme?
Theme is the Big Idea of your story. It begins with a broad idea like unrequited love, corporate corruption, or good vs. evil. From there, the theme boils down into a statement or idea that the author is trying to make about that broad idea: Better to Have Loved and Lost Than Never to Have Loved at All. One Person Can Bring Down a Bad Company. Standing Together Against Evil Is Worth the Sacrifice. You get the idea. You might want to check out this handy list of 100 Common Themes here.

Why All Themes Sound Like Clichés
Themes are universal truths that everyone can relate to. Take Coming of Age, for instance. Everyone reading a COA book has either come of age, is going to come of age, or is in the throes of it as we speak. That doesn’t make it a bad theme; on the contrary, that makes it something your reader is sure to understand. The trick is to put your own twist to it. Have you ever thought about Gone with the Wind as a coming-of-age story? Scarlet grows up from a bratty, spoiled teenager to a grown woman who figures out some serious stuff. She may not ever face the popular clique in her twenty-first-century high school, but a lot of the lessons are the same.

Can You Have More Than One Theme?
Absolutely. Complex stories come at you with lots of different issues. In the Harry Potter series, a weak, good person takes on a supremely powerful evil force. (Same theme as the David and Goliath story, by the way, and Star Wars, and about a thousand others.) There’s some coming-of-age-ing going on too. There’s Professor Snape’s character arc, which is a Sacrificing All for Love theme. And several others as well.

Example: I’m going to write the story of Racism in the Deep South. Really? I’m already bored. It’s not that stories of racism can’t be interesting (The Help, To Kill a Mockingbird), but if you begin with that broad paintbrush, you’re likely to write something clichéd. Racism in the Deep South will have you trotting out all the well-worn tropes: the belittlement of some good-hearted but proud black woman; a girl getting pelted with tomatoes as she walks into an integrated school; a young man is threatened by a gang of whites. These things did happen and continue to happen, but with that giant billboard of THEME blinking in big neon lights over your computer, you’ll have a hard time making them unique.

Plot vs. Theme
Plot is closely related to theme, because once you summarize the plot, you often see the theme emerge. Corporate Corruption Nearly Proves the Downfall of a Young Idealistic Attorney (The Firm). Theme? It’s Okay to Break a Few Rules to Bring Down the Bad Guys. (Also known as The End Justifies the Means.) But again, if you come up with that tagline or summary first, you have to force characters and situations and settings into that mold. And in thinking up your characters, you’ll have to find the Evil Corporate Hotshot, the Idealistic Young Attorney, the Spunky Girlfriend Who Plays the Role of Conscience—ugh. I’m bored again. These are archetypes, not people.

So, What Do You Do?
Instead of searching out a tagline, plot summary, or theme, try writing a story about people first. Everyone’s different, and I know some people start with plot or setting, and I can’t argue with that. But character had better be close behind, because the best plot in the world can’t save a story peopled by cardboard cutouts. If readers can’t identify and engage with the characters, your big, deep theme won’t mean a thing to them. In fact, they probably won’t get far enough in the book to figure out what the theme is.

Find something compelling about your character in your story. Are you writing about someone who doesn’t fit in? That could be boring and faceless unless your character is Katniss Everdeen (The Hunger Games) or Harry Potter or Charlie from Perks of Being a Wallflower. Come up with that person, and even if the theme is common—the Lone Hero Makes a Stand or Good Conquers Evil—the story will be powerful.

So … How Do Decide What Your Theme Is Going to Be?
You don’t. Your theme picks you. You write the most honest, real, go-to-the-gut story you’ve got in you. You people it with complex characters. You put them in impossible situations. Then, when you’re all done, look around. The theme will emerge out of the story like one of those Magic Eye 3D pictures.

You can just leave it alone, but you can also play up your theme once you see it coming out in bits and pieces. You might play with symbolism, or plant foreshadowing that echoes the theme. Is that wand symbolic of Harry’s power? What happens when it breaks and he doesn’t have it anymore? Does it further his Coming of Age, or does it impede it? Spin out those threads to see where they lead. Don’t dress up your theme billboard in neon lights—no reader wants to be blinded by the Big Theme—but you might put a small spotlight on it here and there. Bring it into high relief in places, and then back off.

Let the theme arise naturally out of the people and their situation, not out of your brain. All life events have themes if you look for them, and your story, after all, is just that: A life. Or many lives. Leave the theme-chasing to the lit scholars and fifth graders. They’ll find it if your story resonates. 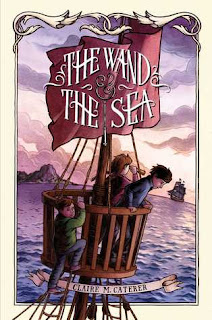 A year has passed since Holly, Ben, and Everett discovered a fantastical realm called Anglielle, where magic is outlawed and those who practice it are hunted. Now, on their return, they find their friends imprisoned and the alliance scattered. Ruthless King Reynard and the sorcerer Raethius are determined to find the very Adepts they exiled in the first place—but why?

It’s up to Holly and the boys to sail to the Isle of Exile and find the Adepts first, but that means enlisting the help of the Water Elementals and a pirate captain with a private agenda. Everett is obsessed with a mysterious locket with a mind of its own, and somehow, no matter where they go, a sinister black-sailed schooner appears on the horizon. With no one to teach her, can Holly master Elemental magic in time to save the Adepts of Anglielle?

Claire M. Caterer lives in the suburbs of Kansas City, where she spends most of her time writing down the adventures of her imaginary friends. She loves chocolate, dogs, and occasionally, chocolate dogs. The Wand & the Sea is a sequel to her first novel, The Key & the Flame.