Sharon Huss Roat, author of BETWEEN THE NOTES, on the personal and unique reading experience

We're excited to have Sharon Huss Roat join us to share more about her debut novel BETWEEN THE NOTES.

Sharon, how long did you work on BETWEEN THE NOTES?

I started thinking about this story back in 2009, wrote the first draft in early 2011, rewrote and revised until early 2012 when I first shared it with my agent, and it sold to my editor at HarperTeen in early 2013! Then came editorial notes and several rounds of revision with my editor in 2013 and 2014. I made my very last changes in Fall 2014!

This is something that is ever-changing for me. There have been times when I would set a very strict word-count goal for myself and write until I met it. I wrote a middle grade novel once for my son who was 11 at the time, and completed a chapter each day so that he could read it when he got off the school bus. (He’d say, “Where’s my chapter?” when he came in the door.) I have moved around the house and yard to find the best writing space… sometimes shut in my office, other times by the fire in the living room (on cold winter days), and lately under a shady tree in the backyard. On the evenings when my daughter has dance lessons for three hours, I plant myself at the nearby library. I recently found that I could request a quiet study room and expect that will become a favorite writing spot when dance starts up again in the fall! I never listen to music, though I sometimes put on a “white noise” soundtrack of rain—if I have to block out sounds of people talking wherever I’m writing.

What do you hope readers will take away from BETWEEN THE NOTES?

My only hope is that readers will enjoy the time they spend reading my book! I think the reading experience is something personal and unique to each reader. What is meaningful to one person might not be for another. I’ve heard from advance readers who have related to various aspects of the story—the financial hardship Ivy’s family is facing, what it’s like to live with a disabled sibling, and the worry teens experience over what their peers will think of them. Other may relate to Ivy’s stage fright, or the way she uses music to cope. I’m looking forward to hearing from readers about what was meaningful to them! 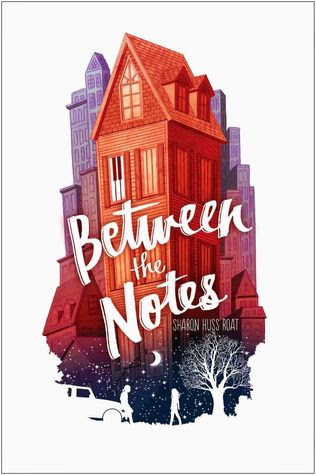 When Ivy Emerson’s family loses their house—complete with her beloved piano—the fear of what’s to come seizes her like a bad case of stage fright. Only this isn’t one of her single, terrifying performances. It’s her life.

And it isn’t pretty.

Ivy is forced to move with her family out of their affluent neighborhood to Lakeside, also known as “the wrong side of the tracks.” Hiding the truth from her friends—and the cute new guy in school, who may have secrets of his own—seems like a good idea at first. But when a bad boy next door threatens to ruin everything, Ivy’s carefully crafted lies begin to unravel . . . and there is no way to stop them.

As things get to the breaking point, Ivy turns to her music, some unlikely new friends, and the trusting heart of her disabled little brother. She may be surprised that not everyone is who she thought they were . . . including herself.

Debut author Sharon Huss Roat crafts a charming and timely story of what happens when life as you know it flips completely upside down.

Sharon Huss Roat lives in Delaware with her husband and two kids. When not writing books for young adults, you might find her reading (YA of course), planting vegetables in her backyard garden, or sewing costumes for a school musical. BETWEEN THE NOTES is her first novel.

What did you think of our interview with Sharon Huss Roat, author of BETWEEN THE NOTES? Let us know in the comments!