Joshua McCune, author of INVISIBLE MONSTERS, on writing what appeals to you

INVISIBLE MONSTERS is the second book in Joshua McCune's Talker 25 series, and we're excited to have him stop by to tell us more about it.

Joshua, what was your inspiration for writing INVISIBLE MONSTERS?

Overall, the inspiration for the TALKER 25 series were recent wars. It's often easy to take sides. It's often hard to understand the other side's motivations. I wanted to write a war story to explore the motivations of both sides, to explore the idea of right and wrong. Is there a right? That's the question Melissa, the main character, often faces when she has to make the choices she does.

In TALKER 25, it's very easy for the reader to sympathize with the dragons. In INVISIBLE MONSTERS, I wanted to present more of the other side.

From a technical standpoint, the battle scenes are always hardest to write for me because in 1st person present, you've got to be in the moment, so you've gotta be moving fast, but still describing enough for the reader to get a sense of the overall scene without interrupting the flow. I am extremely proud of my action-writing ability, but my favorite scenes, and the hardest for me to write from an emotional standpoint, are the quieter moments in the story. For me, that's when the characters really come to life. A lot of the time, it's just surviving, just trying to survive, but in those quiet moments, they can stop and breathe and hurt and love.

I've had a couple of reviews put this in the DIVERGENT category (though certainly with more language to it ;), but I'd put it more in line with Paolo Bacigalupi's SHIPBREAKER or THE DROWNED CITIES. That said, I'd classify the TALKER 25 series more as urban fantasy (or urban warfare fantasy) than dystopian.

How long did you work on INVISIBLE MONSTERS?

Roughly a year and a half from first words through copy edits.

Writing doesn't get easier. In some ways, it gets harder. You hold yourself to higher standards because you understand more about the process of what you're trying to do. So it's easier to get frustrated when you know what you want to do, but you know you're not quite doing it. But then when you do do it, that's a good moment.

What do you hope readers will take away from INVISIBLE MONSTERS?

That things are rarely black and white, even when we'd like them to be.

It took me about 6 years of serious writing before I got published. I'd written four books before TALKER 25, not counting the epic fantasy (way epic - 400,000 words!) I'd written during high-school and college =D.

I know a lot of authors do have an AHA moment. For me, I never had one. Just kept plugging away, refining, revising, reading. One of the most important things I've learned: having a kick-ass opening line and chapter helps a lot!

No particular ritual. Usually don't listen to music, though sometimes for particular scenes, I do go into loop repeat mode. In TALKER 25, Shinedown's 'The Sound of Madness' was a big one.

Don't write to trends. Don't even worry about writing about what you know (though that helps). Write what you like. Write what appeals to you. Write for yourself. 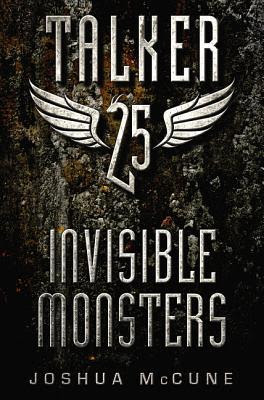 Set in a not-too-distant future where dragon wars have reshaped society, the battle between the dragon resistance and government forces escalates in Joshua McCune's thrilling and heart-pounding sequel to Talker 25, which The Horn Book praised as "absolutely gripping and absolutely horrifying."

Finally free after spending three months locked in a secret government facility, where she was forced to torture and assassinate dragons for the popular television series Kissing Dragons, all Melissa Callahan wants is a quiet recovery. Hiding in an Alaskan cave with fellow escapee Allie (known as Talker 21), Melissa does her best to stay out of the dragon politics. However, when a group of rebels called the Diocletians discovers their hideout and captures Allie, Melissa realizes she must finally choose who she's fighting for—the humans or the dragons. Joshua McCune once again keeps readers on the edge of their seats in this gritty and masterful reimagining of popular dragon fantasy set in a militant future.

At some point in the exuberance of his youth, Joshua's mother nicknamed him "Sunshine." Then he hit third grade, and started writing books about WWIII (complete w/ pics). By 5th grade, his wars had expanded to the universe. Mother was worried.

Over the years, he's continued to worry Mother, but at least the writing's improved a skosh (the drawing sure hasn't. Wanna good laugh, invite him to a game of Pictionary).?

He lives with his wife in San Antonio, TX. They have a black lab, Anubis, and a ferocious dachshund who sometimes answers to Boots. You can call him Joshua, Josh, J, Bane of Anubis... but please don't call me Sunshine. Makes me squirm.?

What did you think of our interview with Joshua McCune, author of INVISIBLE MONSTERS? Let us know in the comments!